Buy the RTX 4090: the price of the top graphics card falls

Buy the RTX 4090: Graphics card now cheaper than ever

At Mindstar you can buy the cheapest RTX 4090 so far

Even after the release of further next-gen graphics cards from Nvidia and AMD, the Geforce RTX 4090 24GB is the top graphics card on the market. While for a long time you could only buy an RTX 4090 at prices above or just under 2,000 euros, the price has at least fallen a bit now. At Mindfactory you can order two Geforce RTX 4090, from Palit and from Gigabyte, as part of the Mindstar offers for 1,949 euros each. The number of items per customer is limited to two. At least 50 graphics cards are currently available. Radeon RTX 7900 XTX and Geforce RTX 4070 Ti are also available as Mindstar deals at top prices.

If you would rather buy a complete PC with RTX 4090 instead of a new graphics card, you can also take a look at our offer for the PCGH Advisor PC 4000 Edition, which was configured by the PCGH editorial team and equipped with Geforce RTX 4090 and Ryzen 7 7700X would.

After the first processors of the next generation appeared with Ryzen 7000 and Intel Raptor Lake, the gaming CPU of the last generation AMD Ryzen 7 5800X3D is in price nosedive. Mindfactory.de currently charges 365 euros for the Ryzen 7 5800X3D. The top CPU of the new generation continues to fall at a new low price. The Ryzen 9 7950X can now be ordered from Mindfactory for 609 euros. The last price was significantly higher.

PCGH Plus: RTX 4090 and 4080 raise the bar for processors. But which Intel or AMD processors fit best?

The eagerly awaited new graphics card generation is starting. Two years after Nvidia started the RTX 3000 series with the launch of the Geforce RTX 3080, the release of the Geforce RTX 4090 is now followed by the generation change. Compared to the previous top graphics card Geforce RTX 3090 Ti, Nvidia promises twice the performance in rasterizing with the RTX 4090 24G and even four times the power with DLSS-3 upsampling. The new top GPU from Nvidia is also said to have twice the energy efficiency. The PCGH test of the first graphics card with Ada Lovelace architecture shows whether the advance praise was justified – more on this below. If you are currently wanting to buy a graphics card and are thinking about getting into the new GPU generation right away, you have to put a tidy sum on the table. Nevertheless, the demand for the new graphics card reference should be high. You can find out here where you can buy the Geforce RTX 4090 and when it will go on sale.

The Geforce RTX 4090 can be bought in these shops 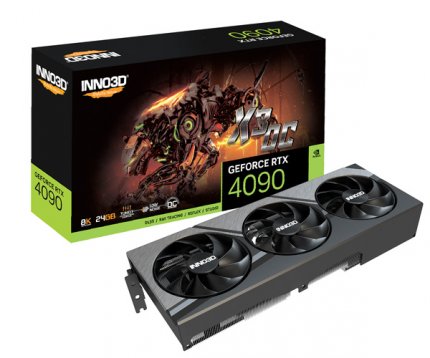 Caseking is one of the retailers that will definitely be offering the Geforce RTX 4090 on October 12th. Source: Caseking

We can still remember the start of the last graphics card generation. The demand for Geforce RTX 3080 & Co. was high, stocks were low and the prices were salted accordingly. Nvidia promises better supply for retailers for the start of the new GPU generation and the launch of the Geforce RTX 4090. However, no one knows how many PC users have kept their money together in recent months to be able to treat themselves to the first graphics card of the new generation. According to the latest information from Nvidia, the prices of the RTX 4090 start at 1,949 euros. Sales will start on October 12 at 3 p.m. Experience has shown that some dealers take their time with the sale, possibly also to check the demand from other dealers and, if necessary, to adjust the prices upwards. According to Nvidia, the Geforce RTX 4090 24GB will definitely include cheaper notebooks and case kings in the launch boat. We also count heavily on Mindfactory and Alternate. It is not yet clear whether you will also be able to buy the Geforce RTX 4090 from Amazon on the final day of the second Prime Day 2022. In our opinion, the chances of getting one of the new graphics cards are good. Below we list the dealers where you can definitely order the Geforce RTX 4090 and the shops where the probability is high. Once Nvidia’s new graphics card is available to buy, we’ll update this article accordingly.

Will there be exclusive deals for Prime members on Amazon on Prime Day 2 for Geforce RTX 4090, Intel Arc A770 or PS5?

With the RTX 4000 series, Nvidia offers many exciting features. The star is undoubtedly DLSS 3.0. How well does the new AI upsampling work?

On the 2nd Prime Day of the year, you can buy a graphics card from the current Geforce generation at a reasonable price: RTX 3080 to 3090 Ti on sale.

The second Prime Day 2022 has started. Until October 12th, Amazon will again lower countless prices, for example for SSD, gaming monitor, RAM and much more. 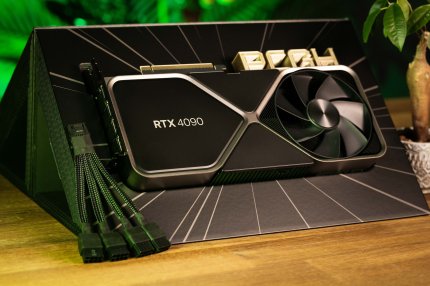 In the PCGH test, the RTX 4090 shows what it’s capable of. Source: PC Games Hardware

Our graphics card guru Raffael Vötter tested the new Geforce RTX 4090. Several days before the release of the RTX 4090 on October 12, PCGH received the new graphics card from Nvidia and put it through its paces. According to the PCGH test, the Geforce RTX 4090 actually manages to achieve twice the previously announced performance of a Geforce RTX 3090 (Ti) in some scenarios. Ampere (RTX 30) was always denied this house number compared to Turing (RTX 20), provided that special ray tracing work is excluded. With this excellent result, the Geforce RTX 4090 proves to be the first choice for owners of high-resolution screens and especially ray tracing fans, because no other graphics card allows you to admire accurately illuminated, pixel-fine worlds so smoothly. There’s a good chance that the energetic Ms. Lovelace will continue to widen her gap over the old Mr. Ampere in the future, because Nvidia has placed functions in the improved ray tracing cores that need developer attention. Cyberpunk 2077 will show the full potential of the new architecture with the path tracing mode called “Overdrive”. What already works very well is the energy efficiency: The limit of 450 watts is only exhausted in the rarest of cases, in normal operation the Geforce RTX 4090 ranges below 350 watts across a wide range of games and resolutions. Meanwhile, the revised cooler of the Nvidia Founders Edition is able to dissipate 450 watts with moderate noise emissions. 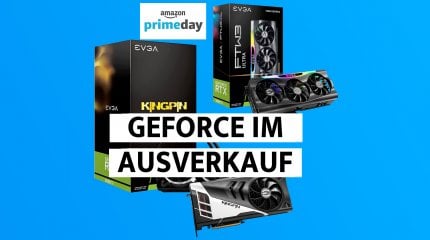 Current generation Geforce graphics cards are on sale at Amazon on the second Prime Day of the year. Source: PCGH/Amazon

If you want to take the opportunity before the launch of the Geforce RTX 4090 on October 12th and buy a graphics card from the current generation at a reasonable price, you must not miss the 2nd Prime Day at Amazon, which started today. Among other things, a Geforce RTX 3090 24GB from EVGA can be ordered at the lowest price from Amazon.de, as well as an RTX 3080 Ti 12GB.

Also worth reading: RTX 4090, Intel Arc A770, PS5: On the 2nd Prime Day exclusive offers for Prime members at Amazon?

If you don’t just want to buy the Geforce RTX 4090 graphics card at the moment, but are also interested in savings deals such as SSD, gaming monitor or CPU at Amazon, Alternate, Media Markt and Co., you shouldn’t miss our Daily Deals. Our PCGH technology guide portal provides well-founded purchase advice for technology products. Prices of the coveted Geforce and Radeon graphics cards and other technology products can be checked with the PCGH price comparison.

Xbox Game Pass: What is the best game of January 2023?

Missed the win. Snigur lost to the rising star of Czech tennis

Samsung Galaxy S22 sales do not live up to forecasts – to reach the goal, the Korean company must sell 30 million before the announcement of the Galaxy S23