If Tesla is indeed a must in fast charging, we do however notice a size difference compared to other players: its location is generally off the highways. We will come back in detail to this phenomenon, trying to understand how we got there. What are the pros and cons for electric car drivers? 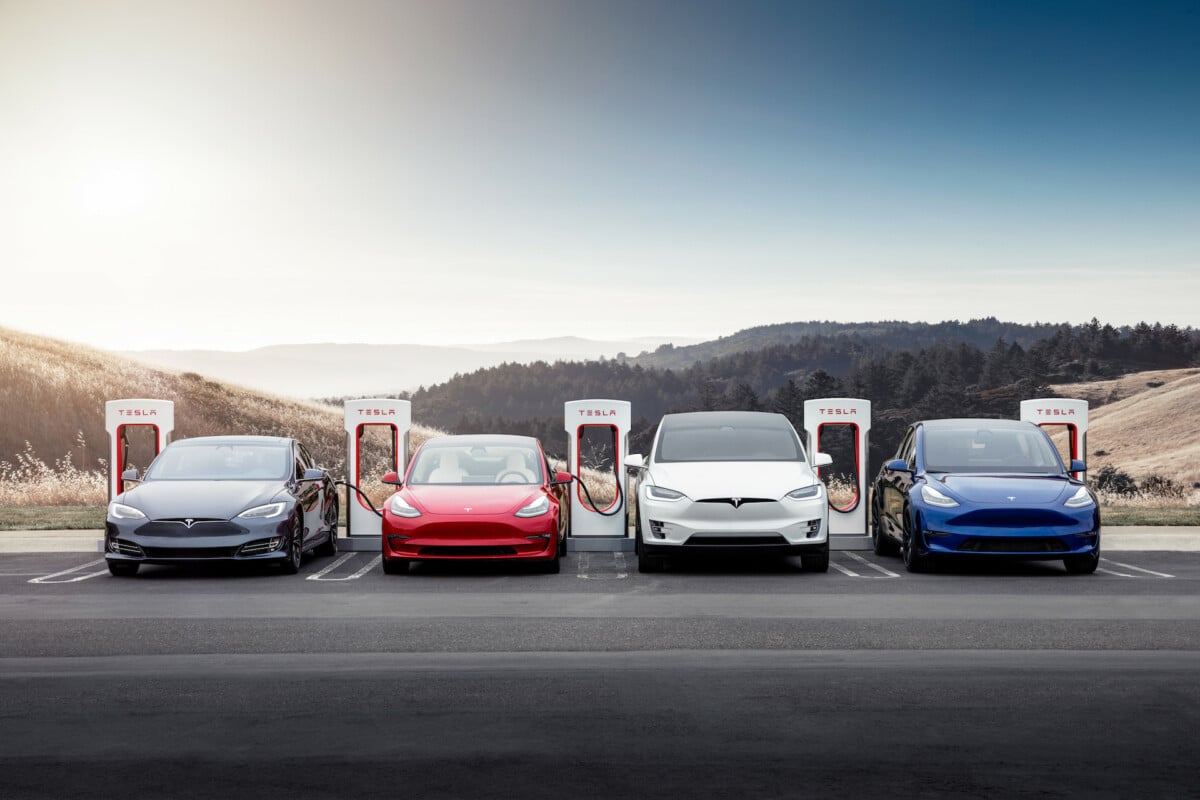 Traveling by electric car is becoming increasingly easy, in particular thanks to the drastic increase in the number of fast charging stations across Europe. Electric mobility players scrambled in 2022 to break records for the opening of charging stations, to the delight of drivers of connected vehicles.

However, between Ionity, Tesla, Fastned or Totalenergies, we are forced to notice significant differences. At a time when Tesla is opening more and more Superchargers to all vehicles, it can no longer be seen as an operator reserved for the brand’s cars. We are going to examine together how charging works for long journeys, and why Tesla already seems to have lost the highway charging battle.

Where are the Tesla Superchargers?

There is no doubt that Tesla is very well established in Europe and in France, with more than 130 Supercharger stations installed to date in metropolitan France. In terms of available charging stations, this corresponds to nearly 1,700 for France alone, i.e. more than 12 terminals per Supercharger station. By way of comparison, Ionity, the number 2, has around 570 in France. 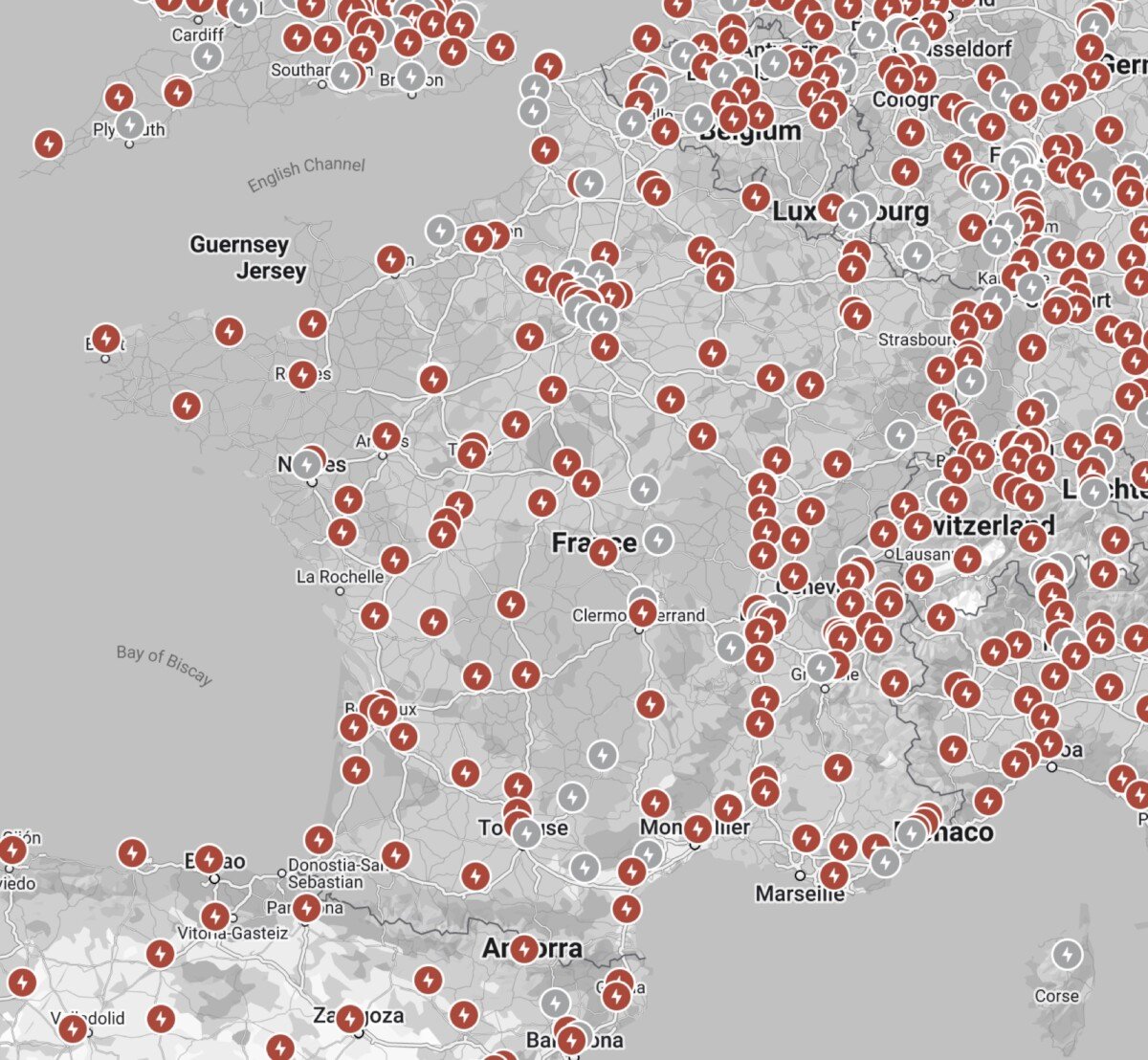 The Tesla Superchargers map in January 2023

With such an impressive number of terminals, it may be legitimate to wonder where they are located, especially for those who travel on the motorway. Indeed, with some exceptions, Tesla Superchargers tend to be off the highwaysin shopping center or hotel car parks, when they are not simply in the middle of nowhere.

Not offering freeway charging allows people traveling on the secondary network to recharge without problems, and this is also useful for locals who do not have a home charging solution: there is no need to take a paying section of the motorway to fill up your vehicle’s battery. Tesla is almost an exception in this regard, because the large fast charging operators Ionity, Totalenergies and Fastned build the majority of their terminals in motorway service areas.

When finding the charger becomes longer than charging itself

If the advantage of an off-highway charge is undeniable when traveling avoiding tolls, the disadvantages are significant for those who cross the country at high speed on the highway. Indeed, at the time of V3 Superchargers which can send up to 250 kW in a Tesla Model 3 or Model Y battery, the detour needed to reach the charger can become longer than the charge itself. 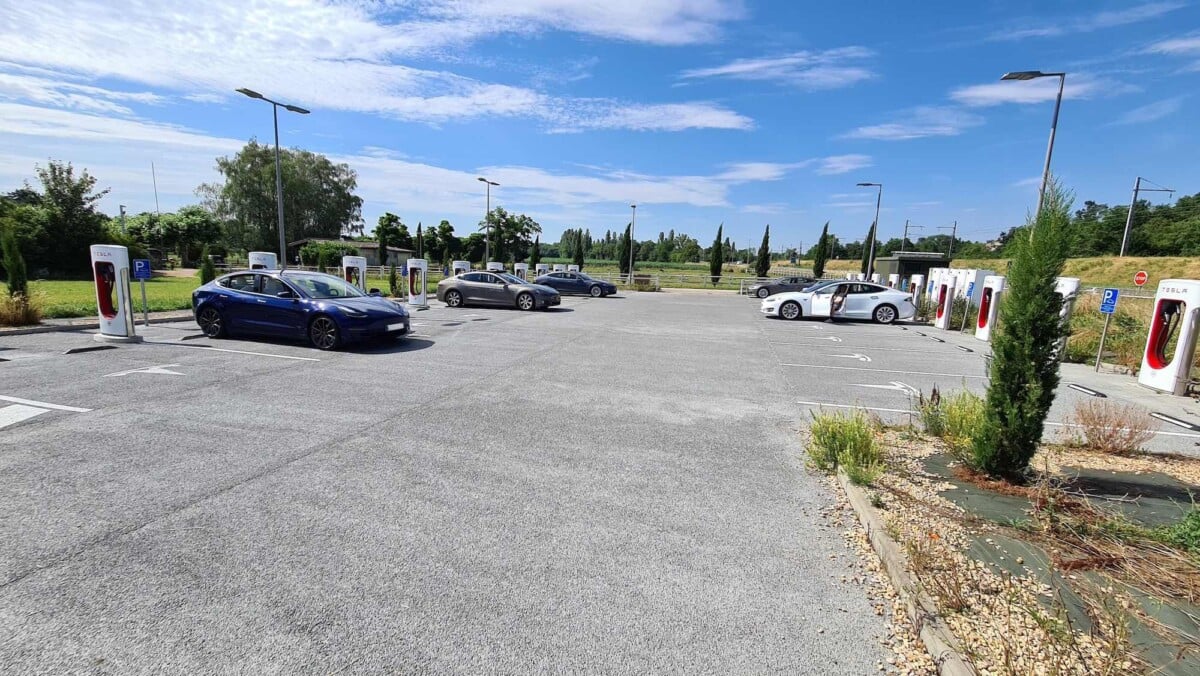 In many cases, a 500 kilometer motorway journey through part of France requires two or three electric car charges, with charges that can be relatively short. If you can reach your destination by charging three times ten minutes for example, it is in your best interest not to leave the motorway, otherwise the time lost due to the load will be greatly increased.

Indeed, reaching a charging point a few kilometers from a motorway exit often involves passing a toll barrier and navigating to the car park where the terminals are, which easily takes about five minutes. The way back takes so long, adding ten minutes of detour to a quick charge is easier than you might imagineespecially with Superchargers that are located in commercial areas difficult to access during peak periods. 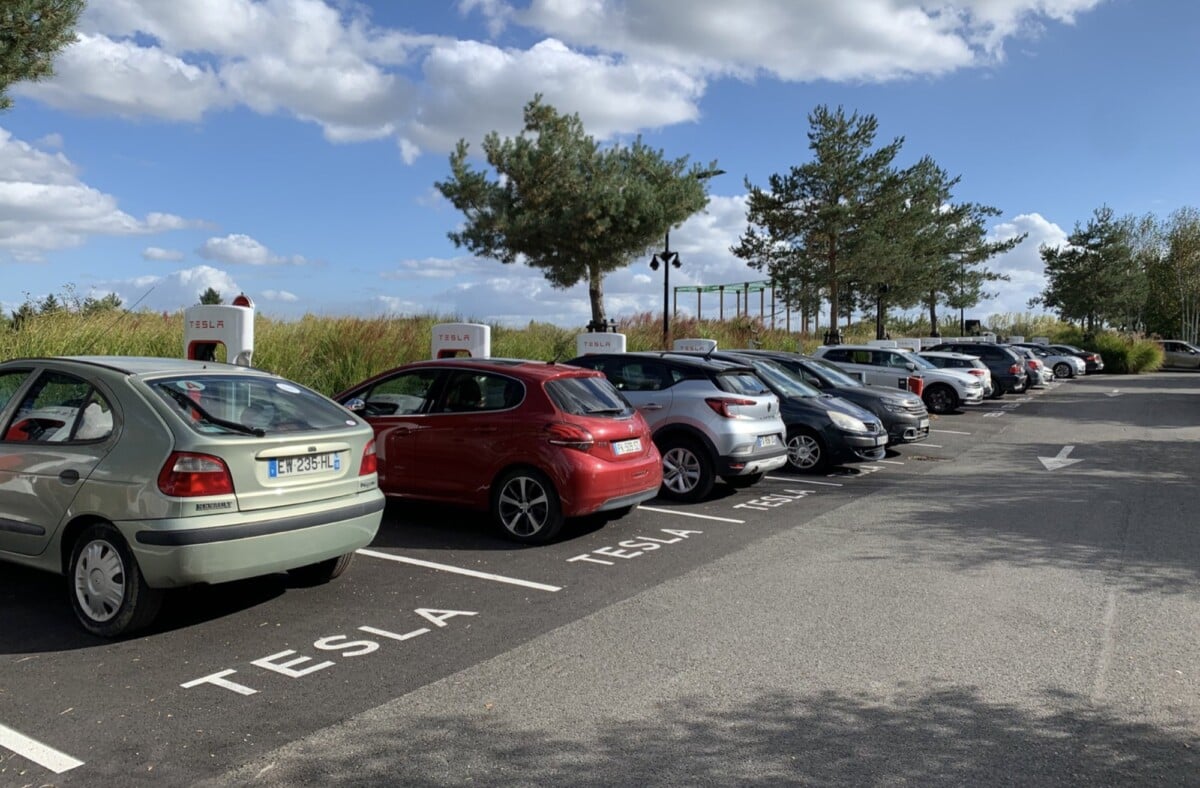 The Tours Supercharger in the commercial area, with many places occupied by thermal vehicles // Source: 1TeslaOtherwiseNothing on Twitter

This is particularly the case for the new Superchargers established since 2021, in Perpignan, Montpellier, Bordeaux and Honfleur. All these Superchargers have the particularity of being in a commercial area near the highway as the crow flies, of course, but in practice they require long minutes to reach the famous charging point, once you have left the highway.

Why Tesla isn’t setting up on the highway

If Tesla mainly chooses locations off the highways with its share of constraints for users, why doesn’t he install more Superchargers on the service areas ? Indeed, since 2019, some Superchargers are indeed on different areas. We can mention in particular the Poulet de Bresse area, the Vidauban Sud area or the Vendée area, where 12 Superchargers work alongside Ionity terminals.

More currently, Tesla’s standard is to install 16, 20, or even 28 terminals charging at the same time, which implies having as many parking spaces reserved for fast charging. If this is conceivable in a shopping center car park with several hundred spaces, in a motorway service area with fifty parking spaces, it is a much more complicated mission. 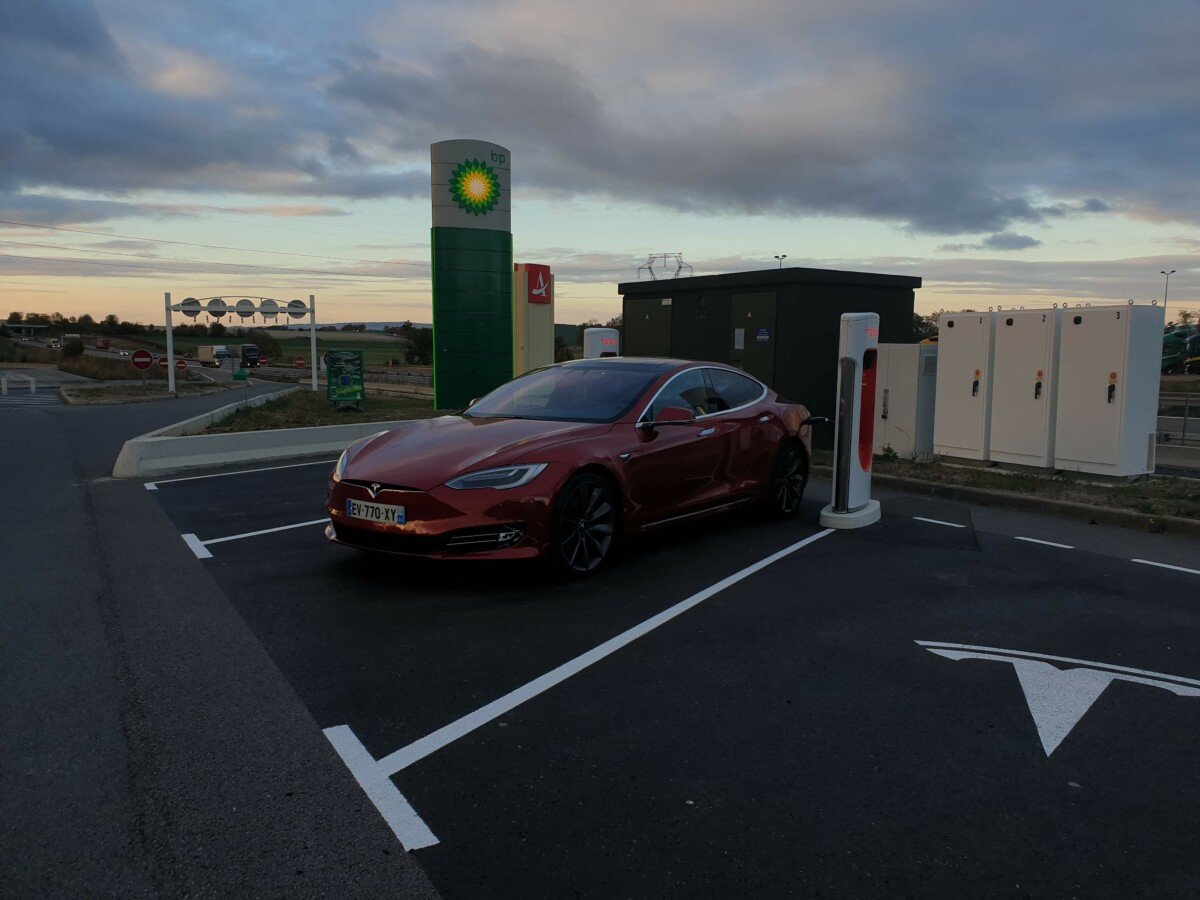 It is indeed difficult to imagine that during the great summer crossovers, the approximately 20 spaces reserved for charging electric vehicles will be respected in a jam-packed area, where finding a place to park becomes mission impossible. We also have an article dedicated to our 4,000 km journey in France during the crossover of summer 2022.

Besides, with a few exceptions, Ionity or Totalenergies stations only have 4 to 8 terminals, far less than each Tesla Supercharger station. We can also imagine that the operators of the service areas (which are generally associated with an oil company) could have made eyes at Ionity, partner of Shell, or at Totalenergies, rather than at Tesla.

Where are the others?

Since 2022, the installation of fast charging stations has drastically accelerated in France, with two players alone representing the majority of available chargers: Tesla and Ionity. Among the operators currently having more than 100 charging points of more than 100 kW in mainland France, we find Freshmile, Fastned, Electra, Engie, Totalenergies, Allego, and of course Ionity and Tesla. 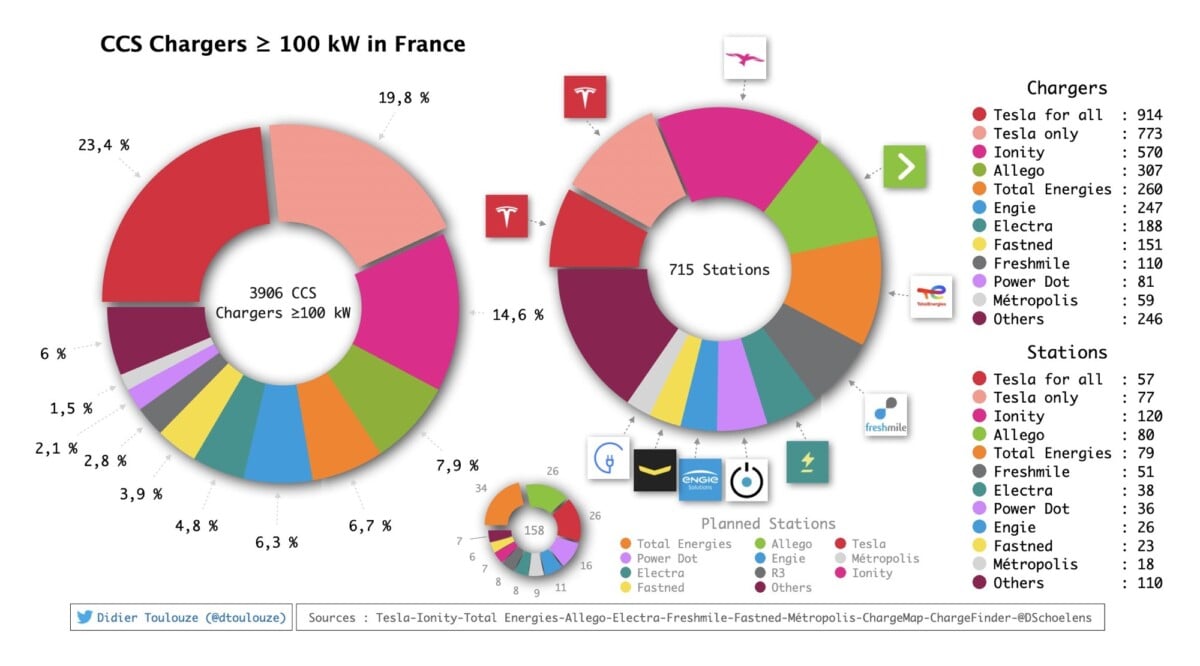 Of the nearly 4,000 charging points over 100 kW equipped with a Combo CCS cable in the territory, nearly 1,700 belong to Tesla, while the second player – Ionity – only has 570.. This clearly shows the difference between Tesla and the others, at least in terms of the number of terminals per station: there are 134 Tesla stations compared to 120 Ionity, for a number of terminals three times greater at Tesla.

As explained earlier, however, the Ionity terminals and others have an undeniable advantage during long motorway trips: they are often located in service areas, which means you don’t waste time recharging.

Moreover, if until now the number of bollards per station was rather low, thus increasing the probability of not finding a free bollard during periods of great transhumance, this is about to change. At the very end of 2022, Ionity opened a station with 16 terminalset Fastned did the sameproving that Tesla does not have a monopoly on very large charging stations.

A future where Tesla is no longer essential

In the world of fast charging, Tesla is no longer essential, even for owners of brand vehicles. Indeed, many drivers now choose to charge at Ionity, Fastned or Totalenergies as a priority with a view totime and budget optimization.

When traveling for electric car trips, have you recently:
– prefer a non-Tesla charger to save travel time
– charged at a Tesla Supercharger having made a big detour or lost time

After numerous pricing changes in 2022, it is indeed sometimes more appropriate to charge outside of Tesla Superchargers, and this is even more true for owners of vehicles from other brands (who do not benefit from the same rate as owners of Tesla, except to pay a monthly subscription).

However, the current recharge card jungle remains a strong argument in favor of Teslawhich enables an unparalleled charging experience for vehicle owners of the brand: just plug in to start charging. What’s more, the integration of third-party charging stations in Tesla navigation is still imperfect, which does not encourage the brand’s customers, in search of simplicity, to stop anywhere other than Superchargers.

When other players — such as Fastned, which has been deploying its Autocharge for many months, but also Ionity with Plug and Charge — manage to offer a similar charging experience, as well as prove the reliability of their terminals in the eyes of the publicTesla will probably no longer be a first choice for many owners. 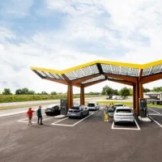 In an electric car, habits must sometimes change compared to a thermal vehicle. Among the exercises most apprehended by some drivers, we find long journeys. Reducing your speed could allow you to get more…
Read more

Smartphones: Is TikTok still number 1? Here are the 10 most downloaded apps in 2022

Again Mbappe, another penalty. PSG win without Messi in Ligue 1