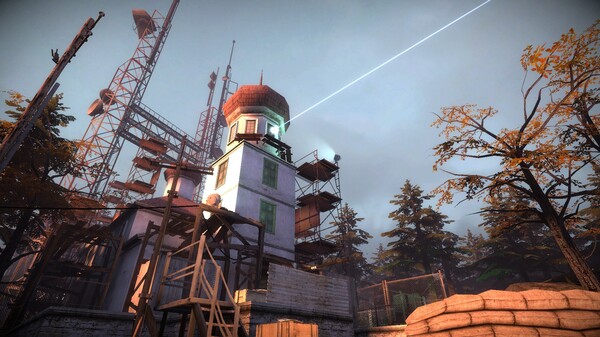 01/12/2023 at 08:04 by Tim Rantzau – The developers called Evac Dev. Team are releasing a new unofficial expansion for Half Life 2 with Evacuation. This is available for free on Steam and puts the players in a forest environment full of dangers and puzzles.

The mod developers Evac Dev. Team together with the publisher SMRC release a new unofficial expansion for Half Life 2. It is available for free on the Steam platform and is called Evacuation. The mod created by the community uses the latest version of the Source engine (“Orange Box Engine”) and the 283 reviews are mostly very positive. In Evacuation, the player takes on the role of a rebel whose helicopter crashes in a heavily forested area.

Miraculously, he survives the impact and, equipped with a walkie-talkie, sets off in search of a way out. However, the player is not the only one wandering through the forest. Together with insect spray and shotgun, it is necessary to clear creatures such as oversized ants or zombies out of the way. According to the developer, players can also expect complex puzzles, interesting mechanics and an immersive soundtrack.

Half Life 2 has aged well since its release in 2004. The story about the taciturn Black Mesa scientist Gordon Freeman makes the title an absolute classic to this day. Over the years, the community has continually added new content through mods, keeping the game alive. At the same time, fans of the series will shorten the waiting time for a possible third part of Half Life.

Marseille head coach: "We are happy that Malinovsky is with us"

Takeover of Activision Blizzard: players take Microsoft to court to oppose the project

Prince of Persia: Sands of Time Remake is finished and has been certified by PlayStation