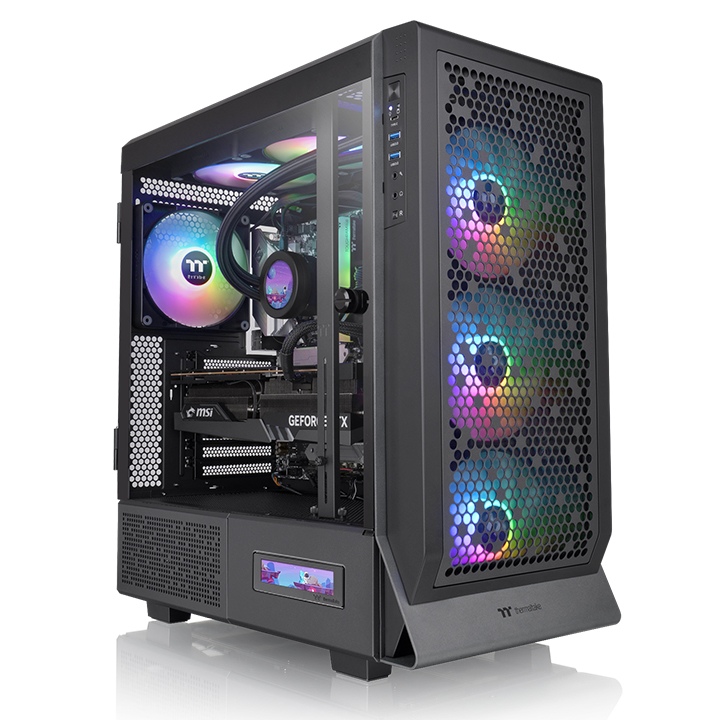 01/12/2023 at 08:32 by Rhonda Bachmann – Thermaltake has introduced a new series of cases with the Ceres series. The Ceres 500 TG ARGB mid-tower case comes with four pre-installed 140 mm fans and an optional LCD panel kit. Perforated panels should ensure optimal airflow.

Thermaltake has introduced a new case series with Ceres. The first product in the series was the Ceres 500 TG ARGB mid-tower case, which is equipped with four pre-installed CT140 ARGB sync fans. The built-in panels should represent a special feature. More than 60 percent of the entire housing should be provided with ventilation holes for optimal air flow.

The Ceres 500 TG ARGB will be released in two colors, black and white. The front bezel is made of stamped metal while there is a three millimeter thick glass panel on the left side of the case. This can be opened and closed with a rear hinge. According to Thermaltake, over 60 percent of the entire case is perforated, which, together with the four pre-assembled 140 mm fans, should have a positive effect on cooling.

The Ceres 500 TG ARGB is 245 millimeters wide, 507.7 millimeters deep and 525 millimeters high and weighs around 10.5 kilograms. Three of the fans are mounted on the front of the tower and one on the back. All current components should be able to be installed in the new housing. Among other things, a 420 mm radiator is supported. The Ceres 500 TG ARGB also has a GPU holder that is supposed to offer additional support.

An LCD panel kit is offered as an option, which is also available in black and white. The 3.9-inch display can be attached to the lower left side and display real-time system information, GIF animations, the time or weather information via the TT RGB Plus 2.0 software. The price for the case is 179.90 euros. The LCD kit costs 129.90 euros.

PS Plus: New "Free" games for Extra and Premium - coming in January!

Dead Space Remake has a secret ending, unlockable only in New Game Plus