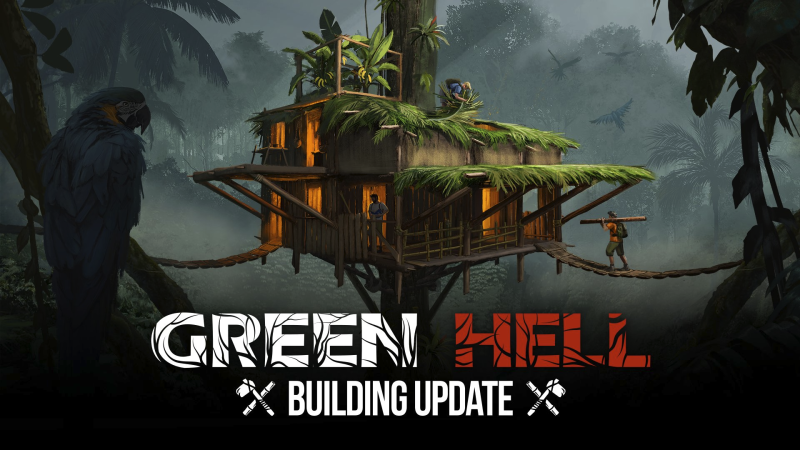 Developer and publisher Creepy Jar has announced that the popular jungle survival simulation game Green Hell will be getting a brand new build mode later this month with new features such as tree building, new materials and a new notebook.

Previously, Creepy Jar launched a pre-beta (PUB) that allowed thousands of fans to join the huge play test. The goal was to collect feedback to help the developers create the new mode, which is scheduled to launch on January 23rd.

According to the press release, the update will include the following features:

Build your house in the trees. Using the new “climbing rope” design, players can travel to the tops of the trees to build their own treehouse. Find the largest tree covered in Indigo Blue Leptonia mushrooms and Banisteropsis creepers and build your two-story wood/bamboo treehouse and connect it via footbridge to other tree platforms. The new Floating Frame platform will allow players to build their abode up to 3 stories high right on the water. Use the new wood/bamboo triangular frames to create an even more unique home than ever before. Keep unwanted visitors out with wooden/bamboo doors. More building material options – bamboo and wood are everywhere. Build walls, roofs and ceilings with the material you like. No predator is safe when players are armed with the all-new Heavy Stone Axe. Efficient Building – Place more than one building at the same time to speed up the building process. Upgraded notepad. Clear Your Way – Cut down large palm trees, logs, stumps and branches to clear your way through the Amazon.

Aroged: US negotiations with Japan and the Netherlands will not lead to an immediate restriction of supplies of lithographic equipment to China

At the end of January, the infernal retroshooter Dread Templar will leave early access and receive a translation into Russian