The design of the iPhone 14 Pro has been ruthlessly copied by this new smartphone in China, the LeEco S1 Pro. The latter works with Huawei Mobile Services and costs less than 150 euros. It also and above all tends to prove Apple’s influence on the market. 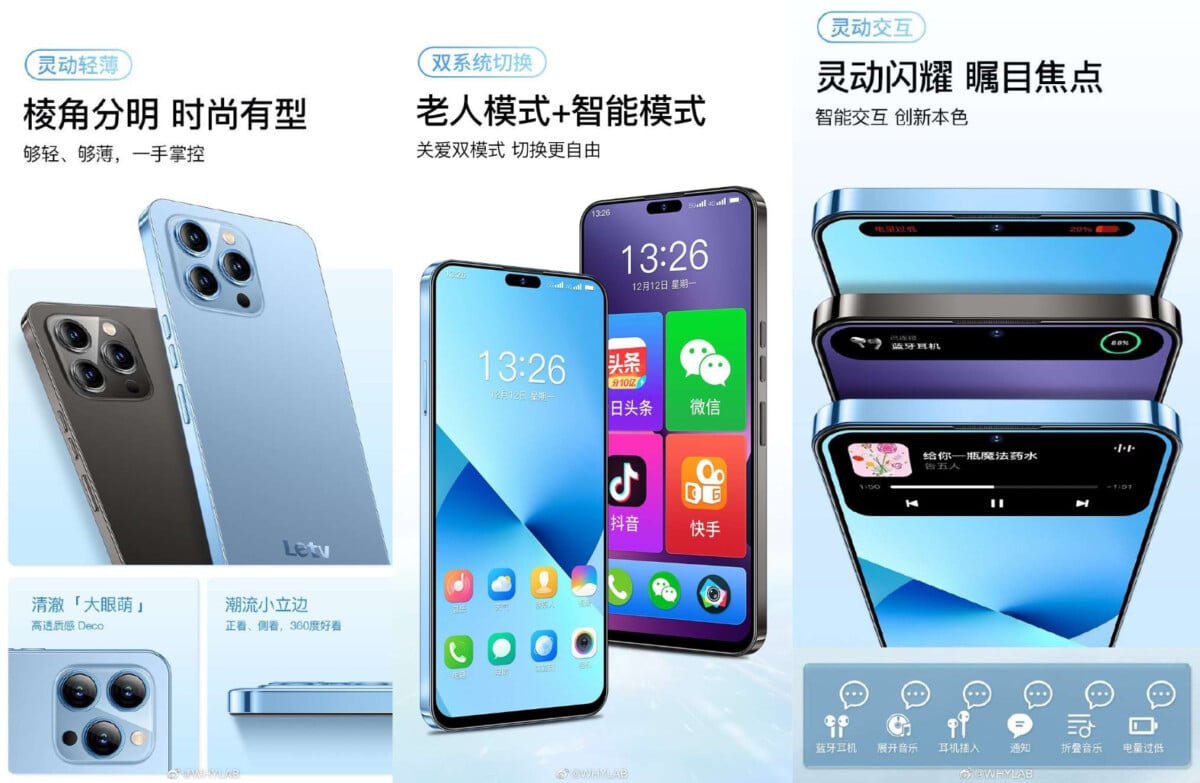 Smartphones have been inspired more or less freely from each other for years. However, it had been a relatively long time since we had come across such an unscrupulous iPhone copy. Here, it is more precisely the iPhone 14 Pro which served as the muse for a new smartphone launched in China just in time for the Chinese New Year festivities. This is the LeEco S1 Pro.

As far as design is concerned, this device almost exactly copies the look of the iPhone 14 Pro. From the flat edges, to the Dynamic Island on the top of the screen, to the appearance of the three-sensor photo block on the back, everything seems to be signed by Apple. By observing the official visuals of the LeEco S1 Pro, some could almost believe that it is an advertisement that the Cupertino company would broadcast in China.

However, it only takes a closer look to realize that the resemblance between the LeEco S1 Pro and the iPhone 14 Pro is only a facade. Already at the price level. The smartphone costs only 899 yuan in its single configuration, or around 123 euros including tax. In terms of features, we are rather entitled to a 6.5-inch LCD screen with a definition of 1600 x 720 pixels and refreshes at 60 Hz. The SoC – a Zhanrui T7510 – is engraved in 12 nm is accompanied by 8 GB of RAM and 128 GB of storage.

Huawei Mobile Services at the wand

The LeEco S1 Pro has a 5000 mAh battery with a 10 W charger. The main photo sensor on the back benefits from 13 megapixels against 5 megapixels for the selfie camera. The smartphone has the merit of being 5 G compatible. Finally, you should know that it is based on Huawei Mobile Services (HMS). It’s Huawei’s alternative to Google Mobile Services (GMS) that we’re much more used to in Europe.

In China, HMS seems to be becoming a very popular solution in a market where Google services are banned. The Wiko 5G sold there, for example, runs squarely under HarmonyOS, Huawei’s operating system.

Coming back to the LeEco S1 Pro, this shameless copy of the iPhone 14 Pro once again proves Apple’s strength in the smartphone market. Or rather, its ability has created trends in this sector. Several competitors are inspired by it – we have already seen several devices with flat edges for example – others seem to be content with copying and pasting.

It should be noted in passing that LeEco (LeTV) is a brand that had great ambitions a few years ago, but whose projects were greatly compromised when the group came close to bankruptcy.

Netflix: the end of free account sharing is already affecting Europe, the price of the additional cost is known

Hogwarts Legacy, the Weasleys are back too: the Vice Principal teaches transfiguration!

MALINOWSKY: Marseille wants to win trophies. And I love this team."

The founder of Oculus was "shocked" by the PlayStation VR2

These electric cars can be recharged… wirelessly! Soon this technology everywhere in France?