Ubisoft what are you up to? Between postponements and cancellations, a look to the future

The latest financial report outlines a situation that is far from easy for Ubisoft which – it can never be emphasized enough – is a giant that encompasses more than 45 studios and over 21,000 employees worldwide. Between significant postponements, cancellations and franchises that are no longer able to shine as they used to, the company founded by the Guillemot family in 1986 will have to embrace a renewal process, not only to improve its situation but also to get closer to legions of users who over time they have moved away from his productions.

Such a big player in the industry needed to publish rhythmic games, we are well aware of this, but to obtain these results, creativity was partly sacrificed on the altar of efficiency, IP – such as Assassin’s Creed and Far Cry – have known a real overexposure and the technological solutions used have become less and less avant-garde. Before reflecting on what we would like from Ubisoft’s future, however, we have reviewed the latest news that has emerged on his state of health.

The current state of things

To begin with, as Yves Guillemot himself admitted, some prominent games such as Mario + Rabbids: Sparks of Hope and Just Dance 2023 are having lower-than-expected sales, a fact that the CEO of the company attributes to inflation and in general to an economic environment that has prompted consumers to focus more on services and to purchase products linked to the so-called “mega-brands”. The postponements of key titles weighed decisively, to which we can also add that of Skull & Bones, which will no longer be released in March but at the beginning of the next fiscal year, a time window that goes from April 1 2023 until March 31, 2024. In this same period the company should launch products such as Assassin’s Creed Mirage – the adventure that will call us to take on the role of Basim – AC Codename Jade and, of course, the highly anticipated Avatar Frontiers of Pandora, in production for the past five years.

To this we must also add an ever-growing list of productions canceled in order to contain expenses, such as Ghost Recon Frontline, Splinter Cell VR, and five other mysterious titles, as well as the substantial disappearance of highly anticipated projects, including Beyond Good & Evil 2 and the remake of Prince of Persia: The Sands of Time (now in the hands of Ubisoft Montreal). Last but not least are other high-profile games already unveiled to the public but whose release is far off, starting with Assassin’s Creed Codename Red, the chapter set in Feudal Japan which moreover – at least according to the insider Tom Henderson – would be facing some development problems. The journalist Jeff Grubb instead referred to the alleged attempts by Ubisoft to be acquired, which however apparently would not have been successful due to the colossal size of the company. However, even without taking into account the unofficial information, the overall picture is not the best. Not wanting to go into topics such as the management of capital and specific human resources in each of the company’s collectives, because we are not in a position to do so, we want to talk, as it should be, about video games.

In a letter to his employees, Guillemot asked them to be cost-conscious, efficient in their work and to “reach the required standards within the established timescales”. Yet one wonders if it was not this search for efficiency at all costs that weighed, at least in the long run, on the value of Ubisoft-branded productions and on the interest they are able to generate among the general public. Intellectual properties such as Assassin’s Creed and Far Cry for example have headed towards increasingly vast worlds, with an incalculable number of contents that affect the enjoyment of the most successful ones. The artistic contribution of individual creatives has decreased significantly – at least as far as public perception is concerned – and in general the feeling that has emerged in recent years is that the company has attempted to set up the development of video games on the basis of assembly lines, with deadlines more or less predictable and repeatable processes. In reality, the gestation of one title is totally different from that of another, for human, creative and economic reasons.

There are so many factors to take into account that it is very difficult, if not even useless, to give some practical examples, but in general the fact remains that standardizing a similar activity is hard to say the least. To this we must add the perception of long-time enthusiasts, of those who have accompanied Ubisoft over time, from the adventures of Rayman and the Prince, to the infiltrations of Sam Fisher, the assassinations of Altair and the massacres of Vaas. 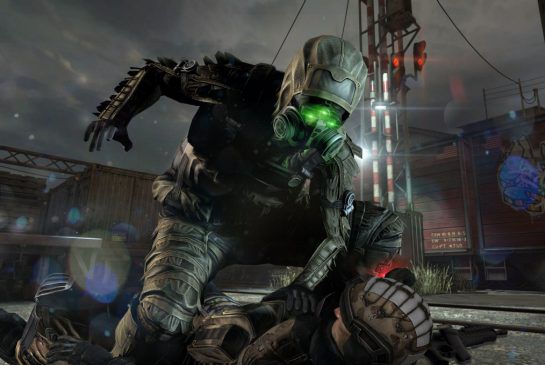 This audience of loyal fans has moved away from Ubisoft’s proposal, with the company increasingly committed to following trends with fluctuating results, both in terms of style and purely playful – did someone say Hyper Scape and Roller Champions? – and seemingly less inclined to listen to feedback. To quote Guillemot’s letter again, the gaming giant is creating the largest lineup in its history and if you think about it, given the amount of projects in place, that’s right. But let’s go in order.

Look to the future

Our discussion could only begin with Avatar Frontiers of Pandora and the new Star Wars game, which in theory could represent what Assassin’s Creed and Far Cry were in the seventh generation of consoles, i.e. two real flagship IPs. First of all, the fact that the Pandora adventure needs an extended development cycle is more than understandable, being the result of the collaboration with James Cameron’s Lightstorm Entertainment, as well as a concrete step of the Snowdrop Engine within the next-gen . Building on the stellar success of Via dell’Acqua at the box office, Frontiers of Pandora could in turn become the progenitor of a prominent series for Ubisoft, based on playful elements intimately linked to the particularities of James Cameron’s universe. The same goes for Massive’s Star Wars, with Creative Director Julian Gerighty suggesting fans to expect news on the game in 2023. In the opinion of the writer, Assassin’s Creed Mirage will also be of crucial importance in shaping the future by Ubisoft, because it could show him the way forward for the future of his iconic IP.

In this regard, we refer to the words of the Creative Director Stéphane Boudon, who explained in an interview how Mirage is an adventure focused on the founding pillars of Assassin’s Creed, born in response to the desire of fans to play a classic experience and small size.

We know that the codename Red will return to offer a wider world and, consequently, with a greater number of contents but we hope that – in line with the words of its Executive Producer – the evolution imposed by the transition to the next-gen constitutes a reason to focus on quality over quantity. Animations related to parkour and combat, attention to detail in the construction of the game world, memorable characters and an omnipresent atmosphere of magic and mystery, further underlined by the soundtrack: these are some of the ingredients that made the series great in past and which could give substance to the personality of its next iterations. Then there is the question of the manageability of an experience, another factor which – in an era full of stimuli and services for gamers – has taken on considerable weight. To be clear, feeling like a little man in an endless world to explore and “complete” is simply too much for that portion of users with a varied “playful diet” and who – for personal and work reasons – find themselves unable to fully experience this type of adventures (albeit reluctantly).

In conclusion, creating vast and interesting maps but with an eye to balancing the contents could be a good solution not only for Assassin’s Creed but also for Far Cry, especially if alongside that attention to detail we discussed earlier ( here the special on the incredible realism of Red Dead Redemption 2). As far as the creation of new IPs is concerned, we are always talking about risky processes, which, if on the one hand could lead to the creation of surprising games, on the other involve economic investments that are sometimes huge, which do not always translate into earnings, especially when the development runs into unexpected problems. The fact remains that the company could give the proverbial green light to smaller productions but of undoubted artistic and creative value, in the style of Valiant Hearts, Child of Light and Far Cry 3 Blood Dragon (it is no coincidence that we mentioned them in our special on glorious past of Ubisoft).

Unpublished titles of this type, combined with new chapters of brands such as Rayman, would find an almost certain diffusion within the catalogs of services, to the advantage – even more than the cash desks – of the very image of the giant in the eyes of users. On the front of upcoming multiplayer-style productions, a type of game that – as Anthem has taught us – does not necessarily lead to huge profits, the motto to follow could be that of “few but ambitious”, starting for example from a new Rainbow Six capable of honoring the tactical past of the series, complete with a campaign in tow.

To conclude, we know how important “guaranteed second-hand” can be for a company like Ubisoft, which also boasts an enviable portfolio of franchises. For this reason, we can only be happy that the remake of Prince of Persia has been entrusted to Ubisoft Montreal or that the remake of Splinter Cell has been thought of as a premium product, capable of laying the foundations for the future of whole series. In other words, if offered at the right time and made with skill, this type of product could also take on great value and appeal to the nostalgia of fans who are mindful of a glorious past. On the other hand, strolling through Renaissance Florence as Ezio Auditore in a newly developed Assassin’s Creed 2 would be a difficult emotion to put into words.

Apple sales: The promotions break the price of the star smartphone, the iPhone 14!

Hogwarts Legacy will use Denuvo on PC for protection

Age falsification is the norm in Cameroon. The German star got into a scandal

Star Wars Jedi: Survivor, release date announcement at the TGA with a trailer, for Tom Henderson

VIDEO. Cool shots by Tsygankov and Buyalsky. The best Dynamo goals for the year