I spent six months with the Oppo Find X5 Pro, the flagship of the Chinese giant. After its nomination as smartphone of the year at the Aroged Awards, it’s time to look back on the pleasures and displeasures of its company. The latter moreover stopped abruptly… but we will come back to this. Sublime photos, fast charging, comfort in the hand, smooth screen… a look back at a real crush. 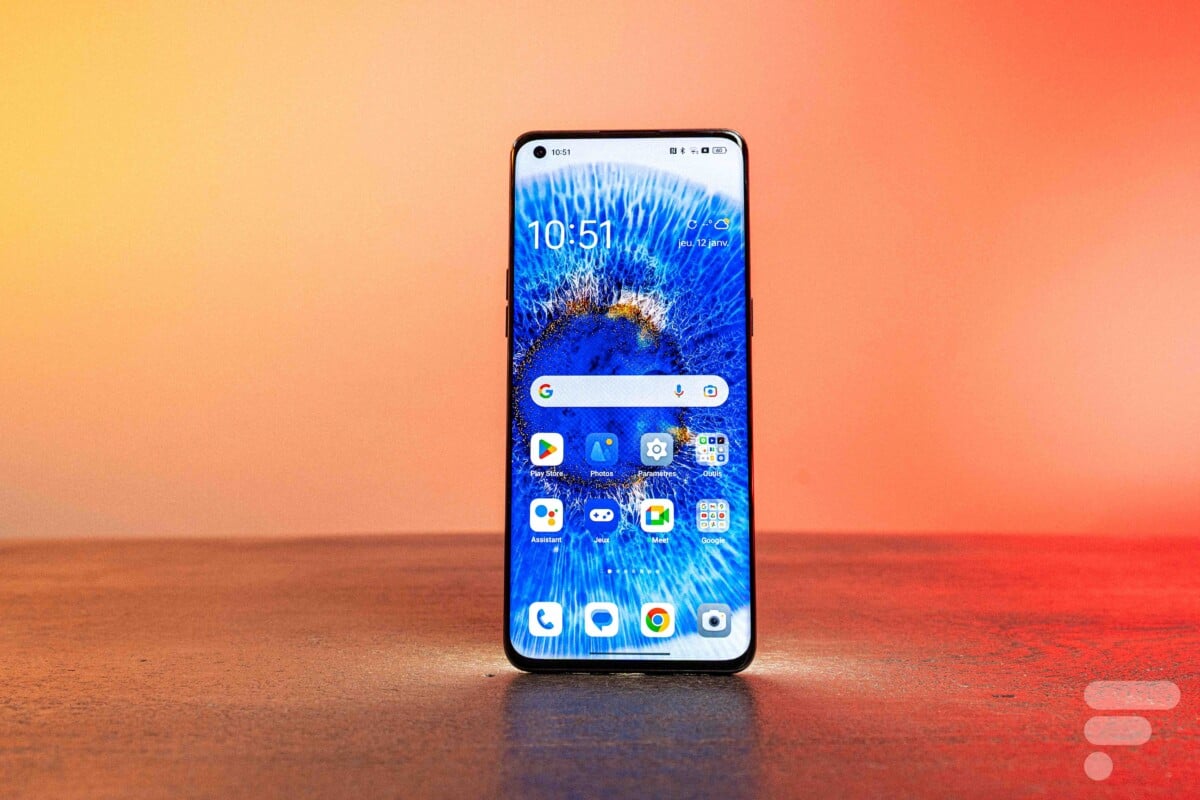 It is not always easy to explain why we love a smartphone. When they have flaws it’s easy to point them out, but when everything lines up, as is the case with the Oppo Find X5 Pro, it can be a little hard to put into words. .

Objectively, we can even find faults with this phone: the absence of a telephoto lens beyond the X2, a battery that is sometimes a bit tight, a chip that heats up a little… Certainly, but all this is very meager compared to the pleasure that ‘he brought me. Back on six months with the best phone that passed through my hands in 2022.

Comfortable to the hair, a neat interface

The first element that comes to mind when thinking of the Find X5 Pro is a general impression of comfort in the grip. The phone is quite elongated with its 20:9 aspect ratio and its 8.5mm thickness feels relatively thin in the palm. It will all depend on how you hold your phone, personally it tends to lodge in the bottom right corner of the palm of my right hand and this position is one of the most comfortable I’ve experienced on a phone this year. 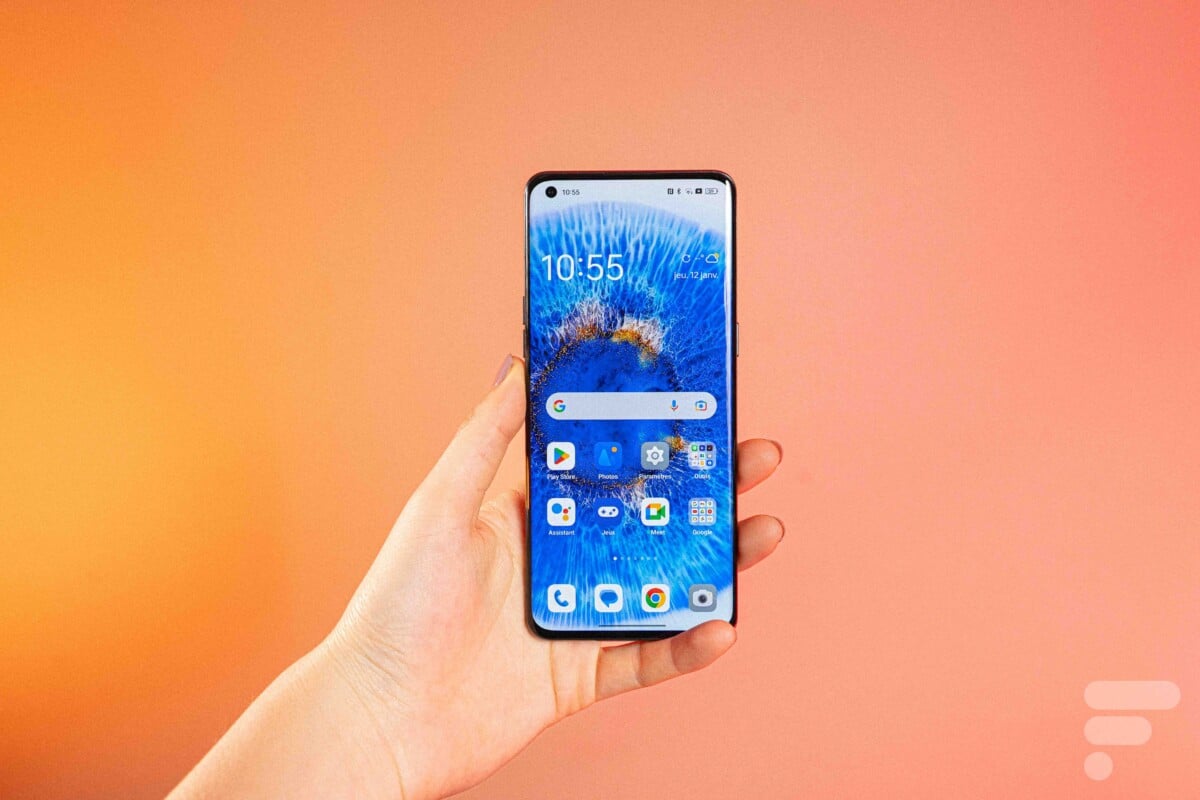 The ceramic back helps a lot with this impression of general comfort. This one felt silkier to the touch than the usual glass or faux leather backs. Note that the two models we tested both have a ceramic back that weighs the whole thing down to 218 g, compared to 195 g in the vegan leather version.

Honestly, the weight of the phone never shocked me and even reassured me. By the way, if you have the opportunity to take the white model rather than black ceramic, do it unless you are allergic to white, because the black color is much more fingerprints.

Let’s also clarify that the weight induced by the ceramic has never seemed bothersome to me for watching videos, both in vertical and horizontal format. And let’s talk about the viewing experience. Already, Oppo has made, in my eyes, a very good choice by placing the punch of the selfie camera at the top left rather than in the middle.

This allows for a nice unobstructed view to the left of the screen. Also, it’s a nice big 6.7-inch panel, with LTPO 2, which means it can go down to 1Hz and up to 120Hz refresh. Brightness level, with 1300 cd/m² on the clock, I never suffered from a lack of brightness in broad daylight. 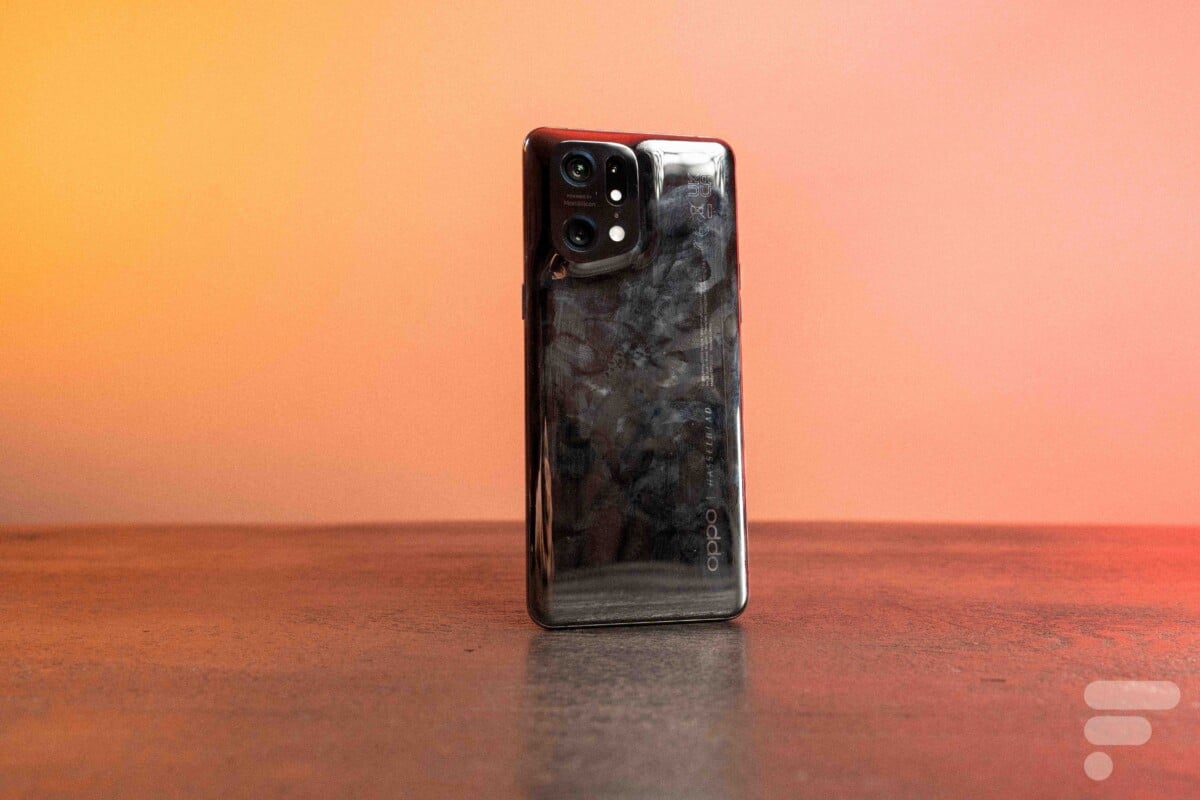 The evening viewing experience is just as pleasant since the phone manages to really go down in brightness, up to 1.89 cd / m² according to our test. I was able to experience it more than once. You can actually go very low to the very point where the screen gives the impression of being turned off. The colors have never failed me and I even think that my television was sometimes a little jealous of my phone as I spent time on it watching series or YouTube.

On the other hand, I was able to notice a little strange behavior, in the evening. I tend to frequently watch the remaining time of a video (don’t judge me). However, each time I brought up the interface, the quality of the video in the background immediately dropped, as if it was suddenly more compressed. Once the interface disappeared, the return to normal took a small second. Nothing too serious, you will understand, we nitpick. 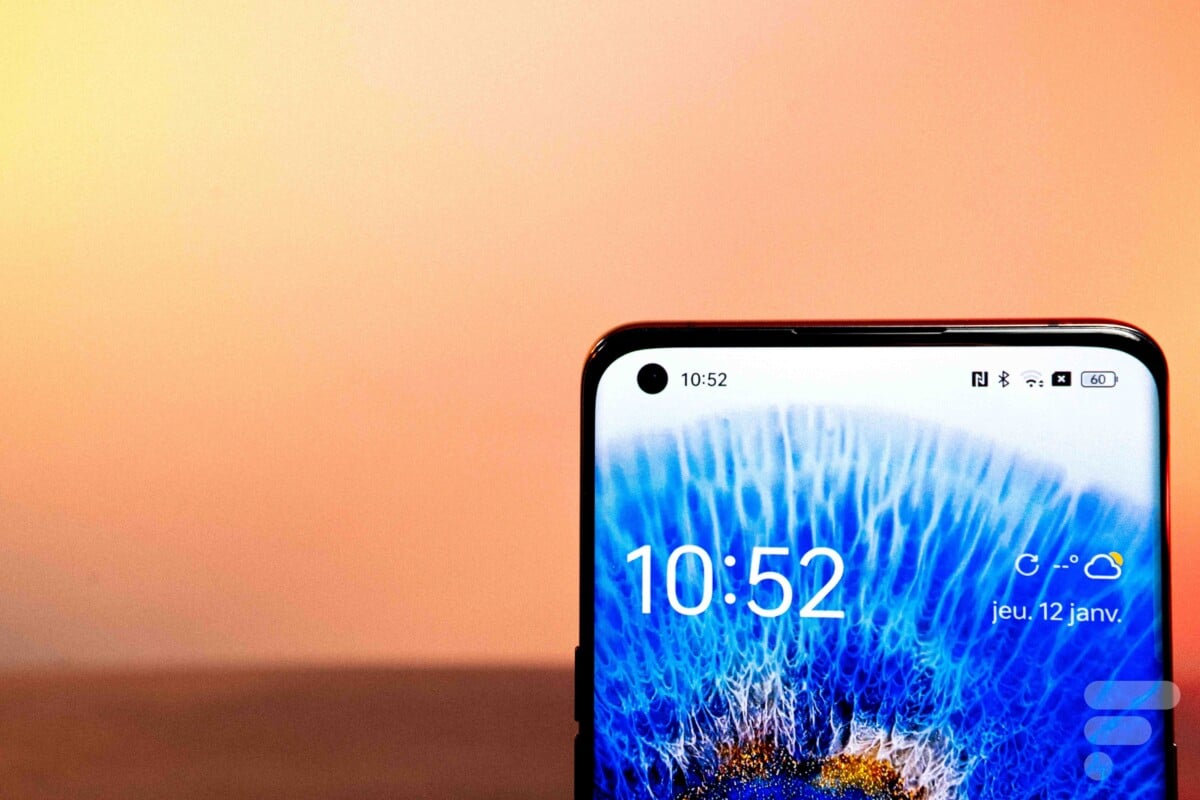 And since we are talking about the interface, we are touching (we had never done this one) another strong point of the Oppo Find X5 Pro. ColorOS 13 is one, if not the nicest interface on Android. Fluid, very responsive, full of small features with the added bonus of a switch to ColorOS 13 (Android 13) which took place very early in the year, from September 2022.

The app drawer is very nice to use with a little floating animation on scrolling. Some features enrich the experience a little: split screen, floating windows or even Monet, which allows you to draw on the colors of the wallpaper for the colors of the interface.

When it comes to smartphone photography, you can split hairs for hours to find out if the image delivered is the most beautiful or the most realistic. So, let’s be clear, the Oppo Find X5 Pro is probably not the most versatile, it lacks a real telephoto lens for that. The colors delivered are certainly a bit warm.

But the shots taken with the main sensor are, in 95% of cases, very satisfactory in that they combine great clarity, very pleasant sharpness, indisputable HDR and colorimetric processing, let’s say flattering, which allows you to immediately post your finds. 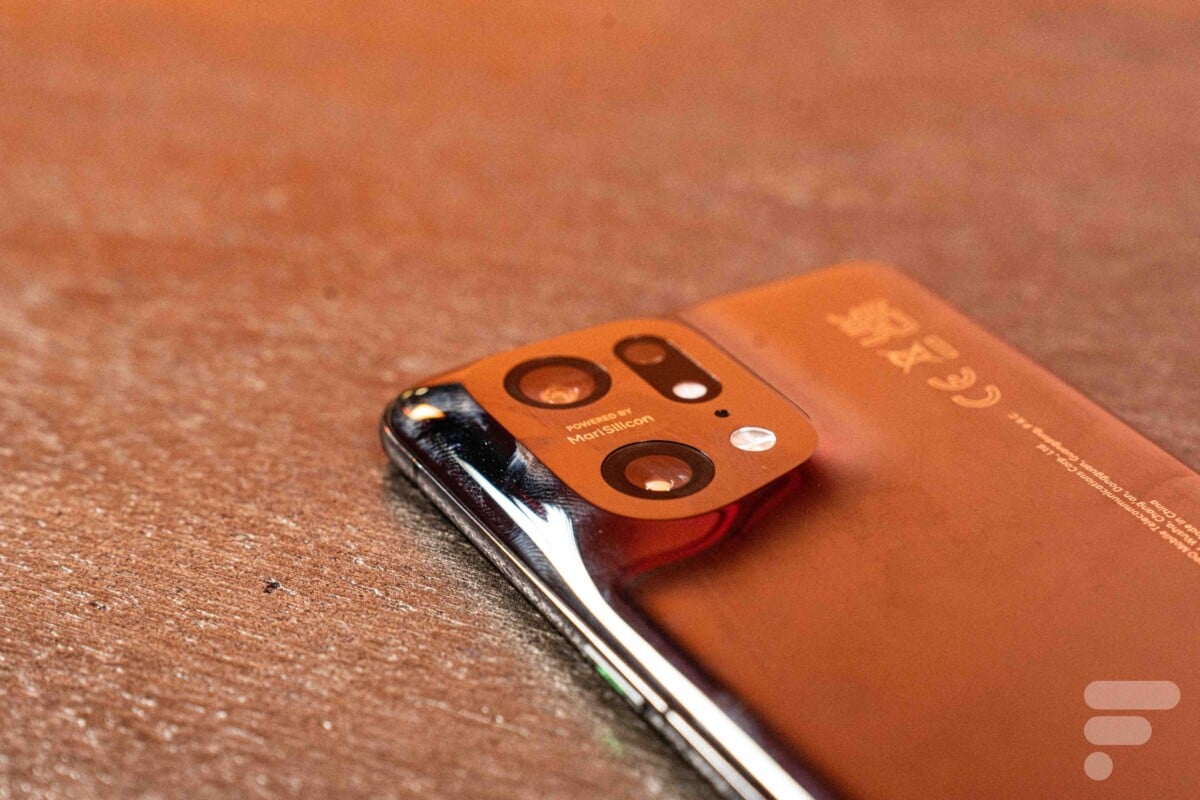 On a more personal note, I really got hooked with the graininess of this camera. This one has a rendering that can be described as predictable in the good sense of the term. By dint of using it, I already had an idea of ​​the result when I pressed the shutter button. A good point.

I also really liked the speed of processing and the trigger, which really captures the scene you want at the time you want. That’s why I don’t think I’ve ever had so much fun blasting my surroundings as I did with this phone. And at the end of the day, that’s what matters most with a camera phone.

A bit like what my colleague Omar mentioned in his long review of the Galaxy S22 Ultra, unless your friends are equipped with the latest fashionable flagship, it’s a safe bet that you will become the official photographer of your friends with this phone, as was my case. 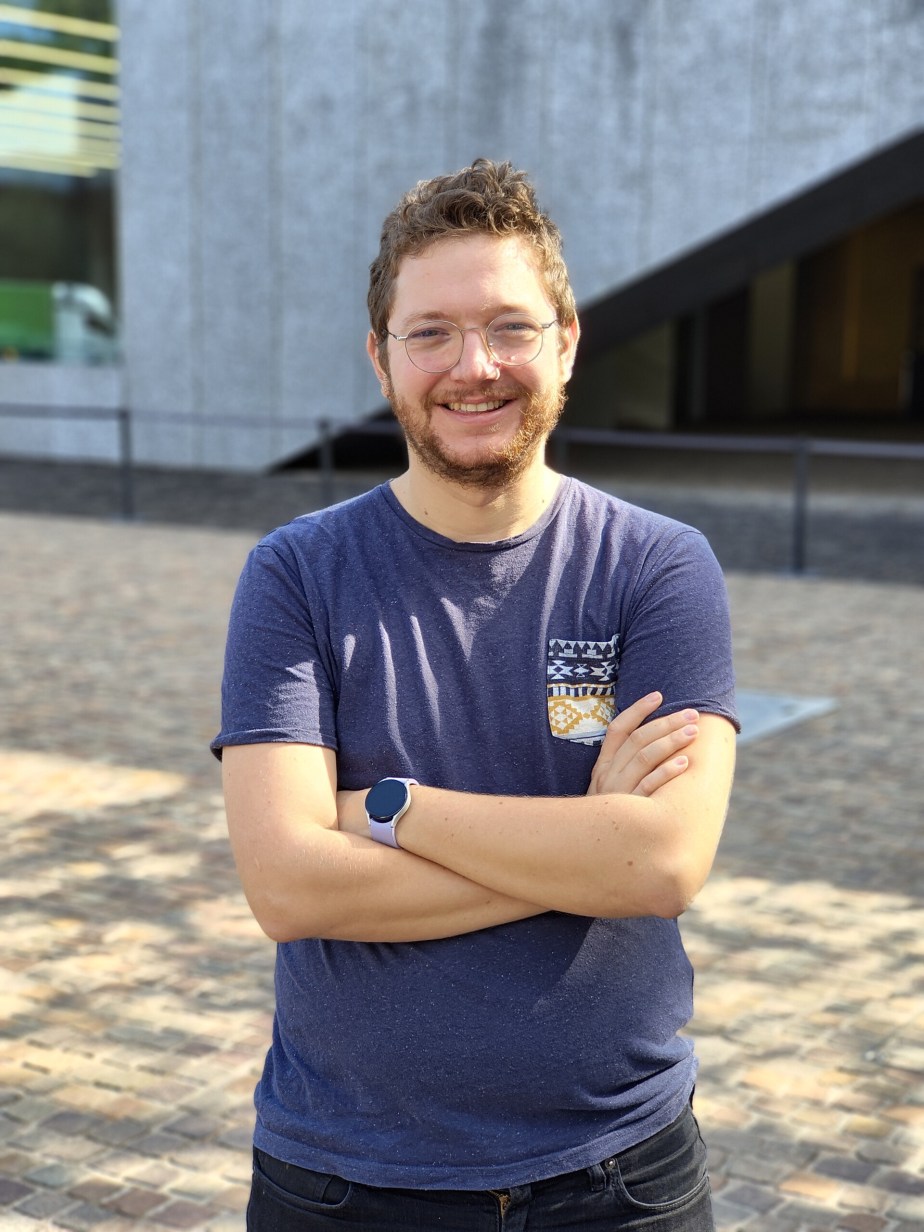 The ultra wide-angle is frankly very close to the main camera, perhaps a tad flashier in the color treatment, but overall it really does feel like we have two devices that work to the full of concert. The close-up use, as you can see with the photo of the doe, is quite stunning in detail.

The X2 zoom is a bit more questionable. Already because it does not allow you to get very close to your subject like an X3 or X5 or even X10. But also and above all because we slightly lose quality of focus. As soon as you move a little, the blur sets in. 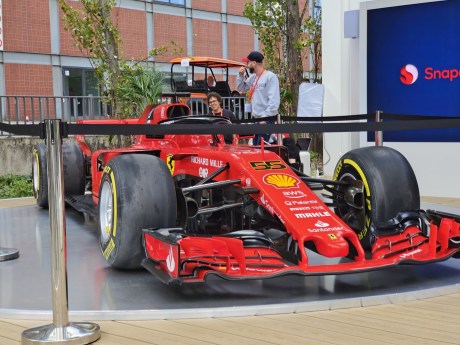 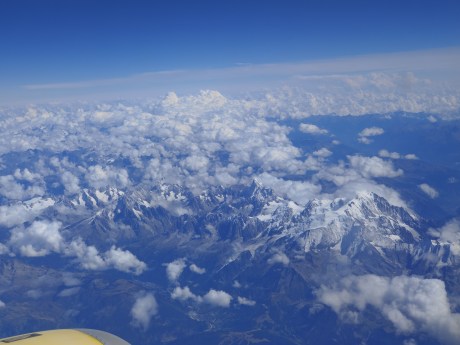 That said, we retain the great qualities of the other two sensors and again, colorimetric consistency is essential. There is only one point where the Oppo Find X5 Pro did not really convince me: night photos. Here are two fairly representative examples below. Generally the result is either too noisy as on the left, or the focus is difficult to achieve as on the right.

However, the result is not catastrophic. It is just less successful than in other situations. 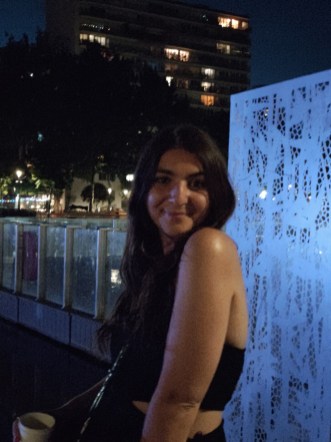 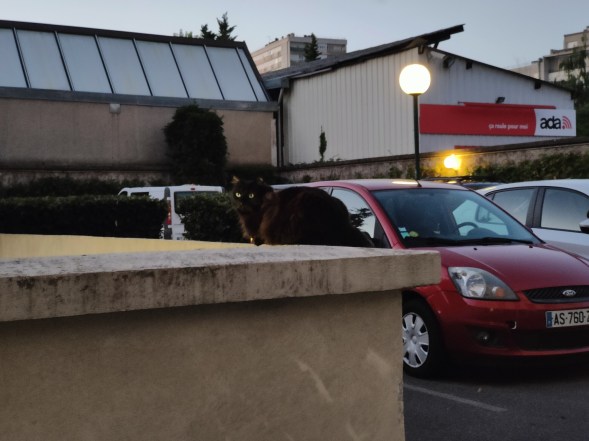 And there is the breakdown

Well, I’ve been telling you about mountains and wonders since the beginning of this article, but it’s time to address the angry subject. My romance with the Oppo Find X5 Pro came to an abrupt end. While I was quietly installed at my desk, I decided to take a photo of my colleague Cassim’s desk to show the huge screens that sit there enthroned to the whole world.

The phone simply bricked, understand by this that it displayed the text below to me, and it was impossible to turn it back on normally. 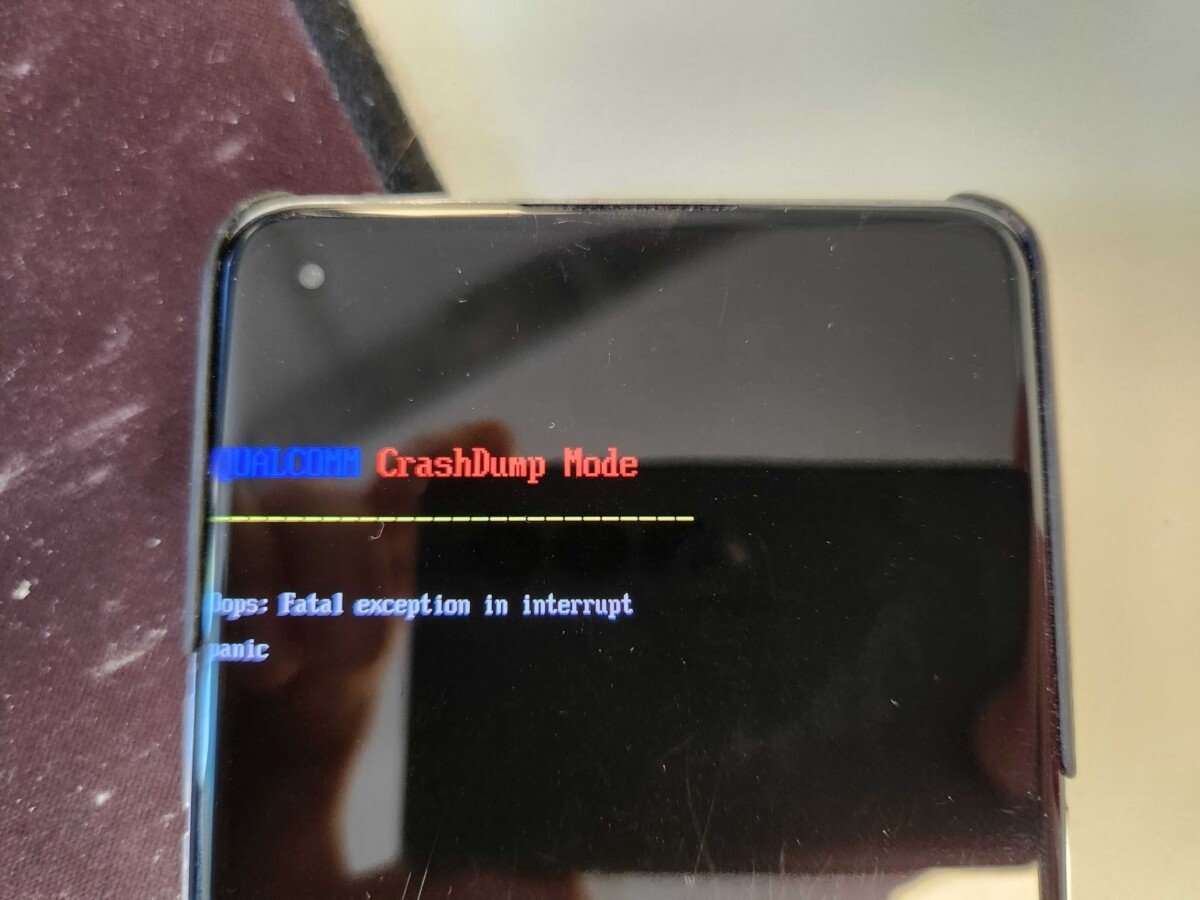 So Cassim may be a “crack”, I’m pretty sure there’s nothing to it (I’ll keep an eye on you anyway 👀). After trying a few manipulations, we sent the phone back to Oppo, who failed to revive it. I also specify that the phone had not suffered any particular shock and had not been subjected to submersion.

It goes without saying that a telephone at 1300 euros which breaks down six months after its reception is rather embarrassing. Even under warranty, it looks bad. As for the reason for the failure, Oppo explains it for two reasons:

The presence of “unstable test software in Beta (in this case, the phone did have ColorOS 13 in Beta, but it had switched to a stable version at the time of the failure); Pre-series hardware. This means that the phones given to journalists are sometimes, and this was the case here, smartphones sent upstream and not having passed all the usage tests.

Clearly, Oppo considers that, both in terms of software and hardware, the use of the Oppo Find X5 Pro that we used for 6 months did not reflect normal use. Way to say that users who bought it will have no problem.

It’s not objective, but after this brutal separation, I simply missed the Oppo Find X5 Pro. And yet, smartphones are not lacking in Aroged’s editorial staff. I have lost count of the items I was looking for in other terminals. I’m thinking of this very particular grain of photos to which I have been very attached, which only the Pixel 7 Pro can approach, but without its speed of capture or its reliability in the result.

I am also thinking of the comfort of fast charging, so rare in the high-end segment. We could also mention the general comfort of use with its superb screen, its ceramic back and its sober and very fluid interface. In short, the Oppo Find X5 Pro is undoubtedly a smartphone that you will remember for a long time. 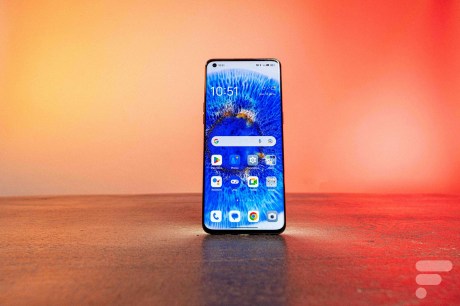 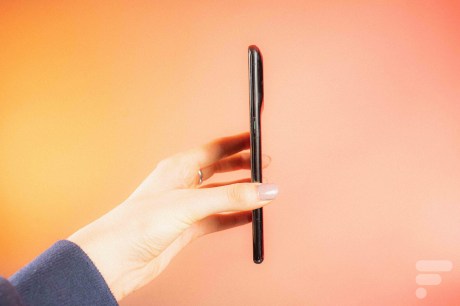 The only real black spot on the board is therefore this sudden breakdown. This puts us in the somewhat strange situation of praising a phone for excellent reasons when this one lasted us only 6 months. That said, Oppo’s arguments seemed reasonable to us, on the fact that our test sample had not passed all the usual certifications. If we can hear it, we have nevertheless made the choice to inform you of it so that you can choose in full knowledge of the facts on the basis of a complete user feedback.

The Witcher: a cosplay of Yennefer, the sorceress on TikTok

For the Sales, NordVPN has decided to break the competition!

Intel B760 motherboards will be 10% more expensive than B660 counterparts