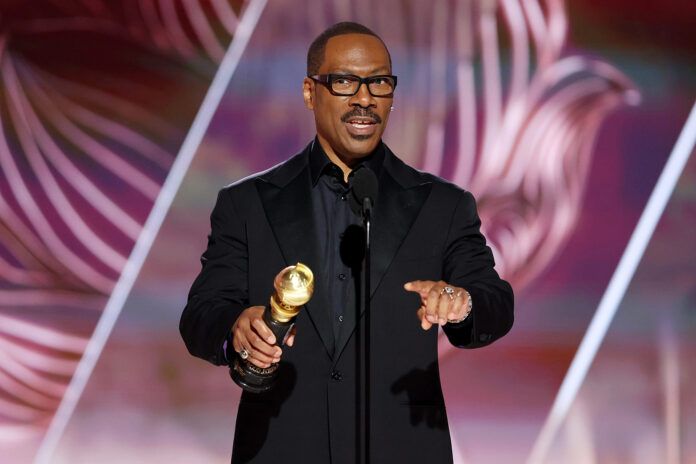 All the winners of the 2023 Golden Globes were revealed in the night between 10 and 11 January in Beverly Hills. The eightieth edition of the event did not miss the appointment with controversy and caused discussion especially for some interventions on stage. The two most discussed episodes are related to the conductor Jerrod Carmichael and the actor Eddie Murphy, awarded with the prestigious Cecil B. DeMille Award.

Once on stage, during his acceptance speech, Murphy wanted to launch a provocation to all present by recalling Will Smith’s slap to Chris Rock in the 2022 Oscars for the words expressed by the comedian on the alopecia of the Hollywood actor’s wife. “There is a precise line to achieve success: prosperity, longevity and tranquility. A line that I have followed throughout my career. In reality it is also simple, you only need to respect three steps: pay your taxes, mind your own business, and don’t bring up Smith’s wife“.

These are the words spoken by Prince Akeem’s interpreter at the end of the event he praised both Rock and Smith while noting the fact that he had no contact with either. Find below a short video published by the Telegraph newspaper with an excerpt of the ceremony.

The episode that ended up most in the eye of the storm was that of the presenter of the Golden Globes. Jerrod Carmichael opened the ceremony with these words: “I am your presenter and I tell you that I am here: because I am black”. After the following statements, the audience split. Many tried to smile while others were visibly embarrassed.

He didn’t stop there however, the comedian himself wanted to clarify his call in detail: “Are you aware that the Golden Globes did not air last year because the Hollywood Foreign Press Association did not have any black members until George Floyd died.”

The story continues: “I was at my house one day drinking tea and I was contacted by a producer who asked me to present the ceremony. One minute like this you are at home and the next minute you are the black face of a historically white situation”. Previously, the Hollywood Foreign Press Association was widely accused of racism and this attack by Carmichael won’t help the organization calm the controversy, far from it.

More controversy arose around Evan Peters. The actor was awarded for his portrayal of Jeffrey Dahmer in the Netflix series.

Police arrest gamer who 'confessed to murder' during game

Over a hundred. Prometheus won the 18th victory and is confidently leading in LEBL

Atomic Heart and the new launch date: February 2023 in the spotlight