One Piece Odyssey review – there are never too many stories!

Like Naruto or some Dragon Ball, the One Piece universe needs no introduction either – this is one of the most recognizable titles that has been out for two decades, so let’s jump right into the plot start – with minimal spoilers!

Here, the Straw Hat team discovers a mysterious island dotted with tall columns, and even with a pillar of light that shoots from the very center of the landmass. 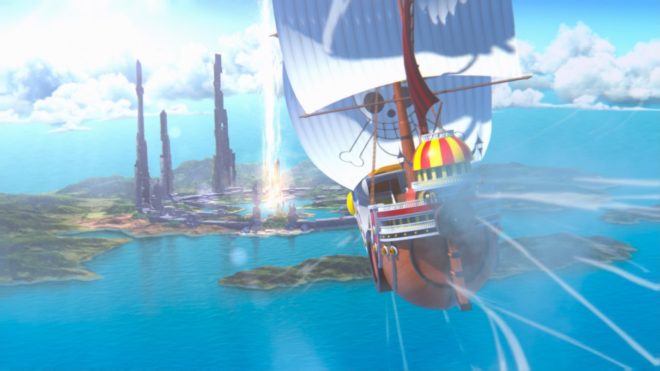 This island is called Warford, whence the path of light leads to heaven. According to legend, the island appeared in the night and from nowhere. And there are rumors that some kind of “great treasure” is hidden on it.

In a word, the team arrives … well, as it arrives. Of course, they are laying the course, but at some point black clouds cover Warford, and the Sunny (ship) falls under the Upstream Stream – a local natural phenomenon when a powerful stream under pressure shoots out of the water into the sky from the bottom. 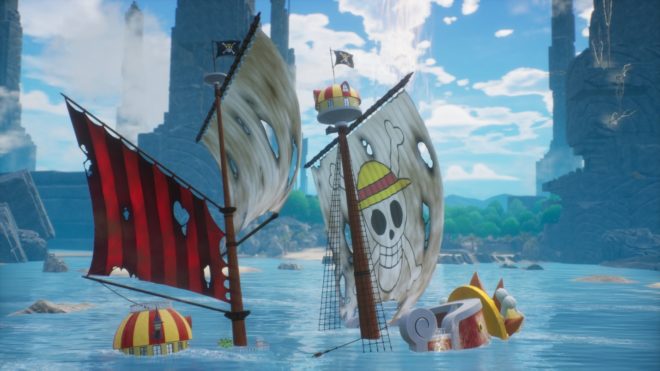 The guys, however, manage to take control of the ship and send it through the storm screen. But, the landing turns out to be hard and the poor Sunny partially sinks into the shallows, and the Straw Hat team is thrown ashore.

As soon as they come to their senses, huge blocks of ice fall on the beach. As it turns out empirically – frozen lightning (that is, they look like ice floes, but they fight with current). 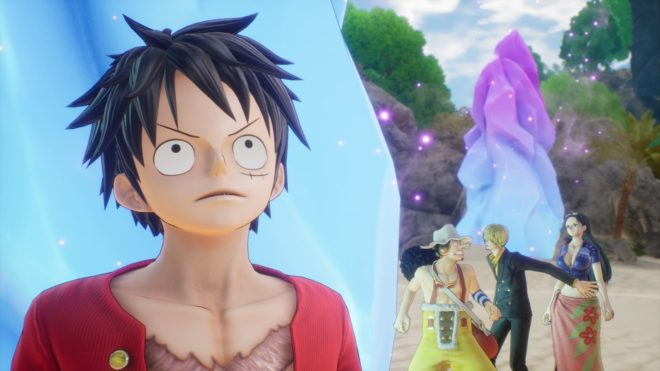 When the peculiar blizzard loses its power, the boulders dissolve as if they never existed, leaving Luffy’s crew to look around in peace and the player to enjoy exotic, alluring and mystical views that will leave any adventurer in awe.

The team includes the well-known Franky, Nami, Tonny-Tonny Chopper, Brook, Usopp, Nico Robin, Ronoa Zoro, Sanji, and Luffy himself. True, Zoro, Brook and Nami disappeared somewhere, and as part of the introductory task, players will be asked to look for them. 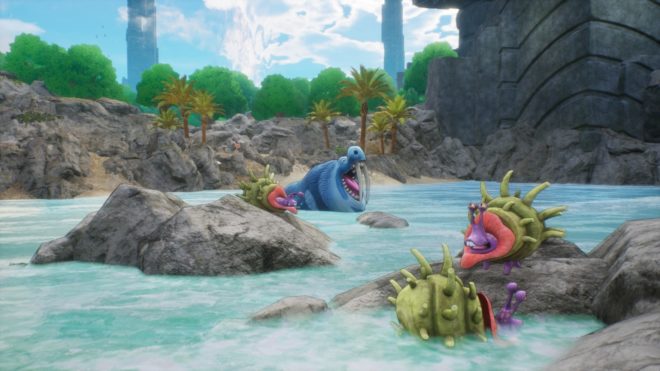 And on this, perhaps, I will not tell you anything more about the plot, because, first of all, One Piece Odyssey is worth playing precisely for the sake of history, exploration of the world and for the sake of the characters themselves – both positive and negative. They interact amazingly interestingly, something is constantly happening here – a real hurricane of events.

Perhaps the only thing worth noting is that the developers have reset the abilities of the heroes. The Straw Hat team lost their powers and will try to restore them with your help, of course. This is one of several main tasks that the player will face, in addition to many side ones, and no less interesting. 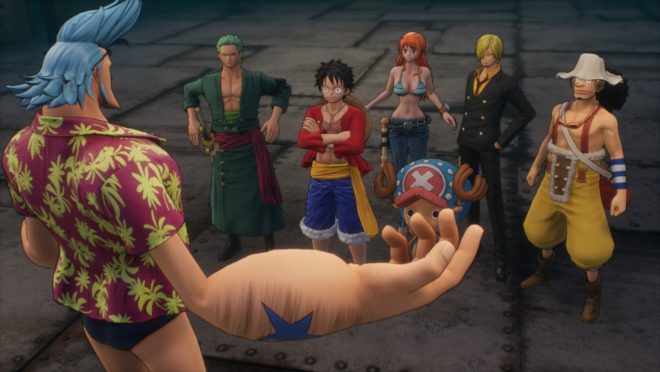 The game is divided into episodes, with the passage of which the player will be helped by a convenient map of the world, which immediately displays all the key areas and characters. And you will not mindlessly wander through the corridors of small levels, but look for loopholes, climb somewhere and think about how to get to this or that place – the maps are dotted with secret areas, the finding of which, as a rule, rewards the player nicely.

Here, literally for a paragraph, let’s retreat to the appearance. Yes, this work is not a competitor to Tales of Arise or some SCARLET NEXUS, but the visual style of the One Piece universe is rendered admirably well. To the heap, the game has excellent optimization and very, very nice level design. So, I think that fans of the universe will not even want to compare with the titles mentioned above – they will be fine. 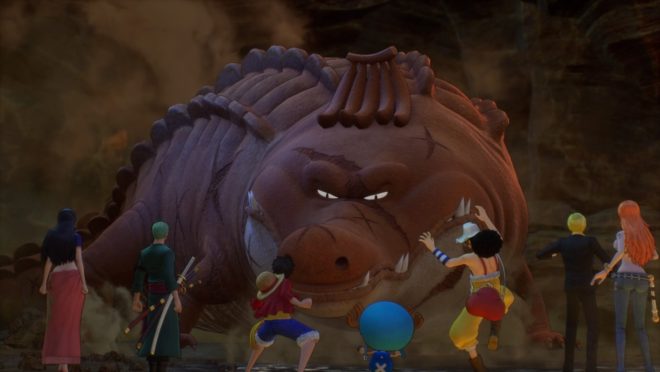 Returning to the “game for the sake of history”, it is worth noting that despite the abundance of activities and interesting places, the game is not overloaded with them. Heroes quickly move around the map, easily find paths to the main plot tasks and fight with motley opponents also lightly.

The combat system of the game involves turn-based combat, but it is so simplified that it boils down to changing heroes, using normal attacks or abilities, which is accompanied by juicy animations, of which, to the credit of ILCA, Inc, there are more than enough in the game. 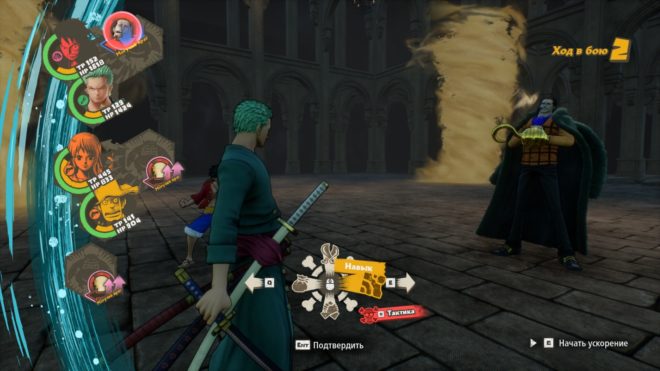 In a word, everything here is “tailored” in such a way that a fan of the universe who arrived in One Piece Odyssey for a new portion of the plot could get it without any special obstacles, grind or endless wandering back and forth on the map, which is great.

However, if you still want to grind a little, you can do contracts in the spirit of “Bounty Hunt” or bonus missions “Memoria” – all rely on special trophies and a generous amount of berries. There are not so many such tasks on the island, but they will certainly provide you with a few hours of additional fun. 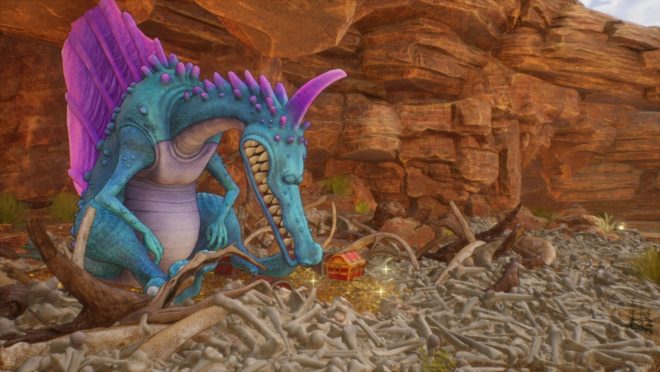 In total, taking into account all side tasks and the main quest chain, One Piece Odyssey is completed on average in 50 hours. Moreover, conducted with interest, with stories, research and delightful, kind humor.

If you are a One Piece fan, you should definitely play this. Perhaps this is even the best game in the universe. Moreover, it is perfectly localized into Russian. Of course, we are talking about subtitles, the voices in the game are Japanese and English – to your taste.

On the other hand, if you’re a die-hard jRPG fan and buying One Piece Odyssey primarily because of its involvement with the genre, you might be a little disappointed by the somewhat casual nature of most of the mechanics.

Let me remind you that One Piece Odyssey was created for fans of the universe who come to Warford for a new portion of unusual stories and interesting, fun adventures. And the game copes with this role surprisingly cheerfully. 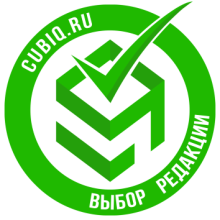 Great storyline and humor worthy of anime and manga adaptations

The game is perfectly localized into Russian

Wizards of the Coast: Updated D&D License Will Benefit Everyone

God of War Ragnarok, complete walkthrough: finish the PS5 exclusive at 100% like a living god!