Without Messi, but in the status of a champion. What to expect from Argentina at the 2026 World Cup?

At the 2022 World Cup in Qatar, the Argentina national team, 36 years after the great victory at the 1986 World Cup and the team of the phenomenal Diego Maradona, finally got the title of the strongest football team on the planet again. This time the “white-and-blues” were led to triumph by Lionel Messi, for whom this World Cup was actually the last chance to join the cast of football players who have the “gold” of the world championship in their assets.

Is there life without Lionel Messi? With this question, the fans of the Argentina national team woke up the very next day after the stormy celebration of the championship. The “blue and white” will have to give an answer to it four years later – at the 2026 World Cup, which will be held on the fields of the USA, Mexico and Canada. Even before the final match of the Qatari World Cup against France, the best footballer of the 2022 World Cup said that he did not see an opportunity for himself to play in the tournament of the strongest teams on the planet in 2026.

Lionel is aware that in four years he will already be 39, and at this age it is very difficult to remain competitive at the top level even for geniuses. And even if the head coach of the Argentines, Lionel Scaloni, said that he was ready to find a place in the national team for Messi and at the 2026 World Cup, and the striker himself subsequently gave an ambiguous interview in which he mentioned a desire to experience what it is like to play as a world champion, reality tells that the World Cup in the USA, Mexico and Canada will most likely go without one of the two (along with Maradona) greatest Argentine footballers in history.

Without the legendary Ten, the cornerstone of game concepts and builds carefully polished over the past decade and a half, the Argentine national team will have to rediscover themselves in order to again claim the status of the strongest team on the planet four years later. Since the White-and-Blues don’t have a single player with the same level of talent and characteristics as Messi, even potentially at youth level, Scaloni’s side will have to rely more heavily on the collective game and possibly become more dependent on counterattacks.

Given the fact that, along with Messi, the Argentina national team will obviously leave another star attacking player by 2026 – Angel Di Maria, who will celebrate his 35th birthday next February – the Scaloni team will most likely have to completely withdraw from the scheme of the game in three forwards. Instead, the “white-and-blue” will obviously come to the classic 4-4-2, which, under the current head coach, the team has repeatedly and successfully used in a number of fights, including key ones. 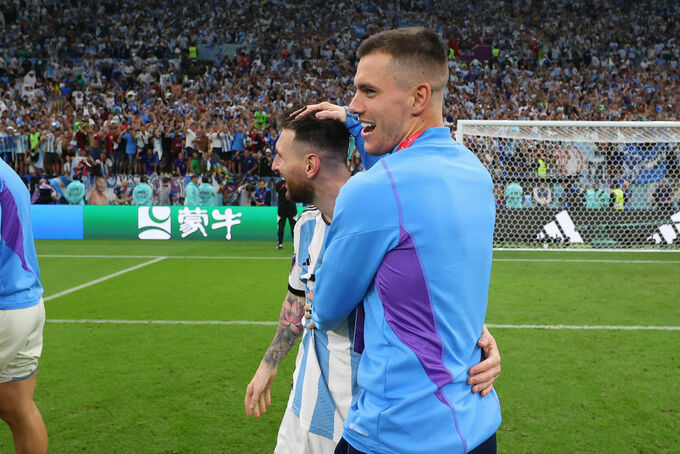 Getty Images/Global Images Ukraine. Giovanni Lo Celso was not in the application for the World Cup, but was with the national team

A formal replacement for Messi, given the likely change in the game scheme from 4-3-3 to 4-4-2, in the Argentina national team will have to be one of the central midfielders. Perhaps we will talk about Giovanni Lo Celso, who missed the tournament in Qatar due to a hip injury. A footballer with such characteristics is able to benefit the White-Blues, as he will free up Rodrigo De Paul and Alexis McAllister for more creative and active work on the flanks.

Ahead, Argentina can count on an attacking duo formed from the hidden hero of the 2022 World Cup, Julián Alvarez, and the loser of the Qatari World Cup, Lautaro Martinez. The latter, although he did not score with effective actions in six matches of the Qatari World Cup, remains one of the most dangerous and productive strikers of our time, and therefore Martinez will definitely come in handy in future battles.

The Argentines can try to keep the attacking trio in the 4-3-3 game scheme by entering the skilled and fast-footed winger of Atlético Madrid Angel Correa, as well as by shifting Julian Alvarez to the flank, which will not be unusual for the latter due to the execution similar functions for Josep Guardiola at Manchester City.

In fact, for the 2026 World Cup, the main problems and questions for the Argentina national team will arise precisely in relation to the attacking line. Defensively, Lionel Scaloni should have much less of such a headache in the next qualifying round, because the only key player who, due to age, probably will not be able to play in the World Cup in the USA, Mexico and Canada, is the 34-year-old Benfica center back. and one of the favorites of the Blue and White coaching staff, Nicholas Otamendi.

For the latter, there is already a more than worthy replacement in the Argentina national team – 24-year-old Manchester United central defender Lisandro Martinez, who has 15 matches behind him in a blue and white shirt, and, according to many, should have ousted Otamendi a long time ago. basics, if not for the special attachment to the veteran from Scaloni.

With the rest of the key figures in the defense of the Argentina national team, it is quite possible to qualify for the 2026 World Cup, and then try to defend the title of the strongest team on the planet there. On the right, 24-year-old Nahuel Molina from Atlético Madrid played in Qatar, on the left – 30-year-old Nicholas Tagliafico from Lyon, and in the center Otamendi’s partner most often was 24-year-old Christian Romero from Tottenham Hotspur “. In terms of age, each of them may well qualify for a place at the base of the Argentina national team in four years. The same goes for 30-year-old Aston Villa goalkeeper Emiliano Martinez, who became one of the Blue and Whites’ heroes in Qatar, winning two shootouts in the play-offs (against the Netherlands and France).

There are no prerequisites for the parting of the Argentine Football Association with Lionel Scaloni, who has been the head coach of the Blue and White since 2018. For four years of work with the team, a fairly young specialist (Scaloni is now only 44) has achieved incredible things, winning everything he could. In addition, already during the 2022 World Cup, Lionel demonstrated flexibility in his work, although the start of the World Cup turned out to be shocking for his wards, to put it mildly – the defeat by Saudi Arabia (1:2) …

Scaloni’s current contract with the Argentine Football Association runs until the end of 2026, which means that the national team under the supervision of this particular specialist will travel to the World Cup in the USA, Mexico and Canada. Before this tournament, something completely unforeseen should happen in order for Argentina to replace the head coach, who now has to deal with reformatting the team and finding an answer to the key question – is there life after Lionel Messi? ..

PS Argentina’s national team will play its first match on the way to the 2026 World Cup in March 2023 – that’s when the start of the qualifying tournament for the new World Cup is scheduled in the CONMEBOL zone (South America).

“A face that only a mother will love”: users reacted to The Last of Us 2 video with Bella Ramsay as Ellie

Shortly before the end: Google Stadia gets one last game

Insider: in early March, there will be one demonstration of Bethesda projects for the media