VERNYDUB about winter transfers of Kryvbas: “There will be more replenishments” 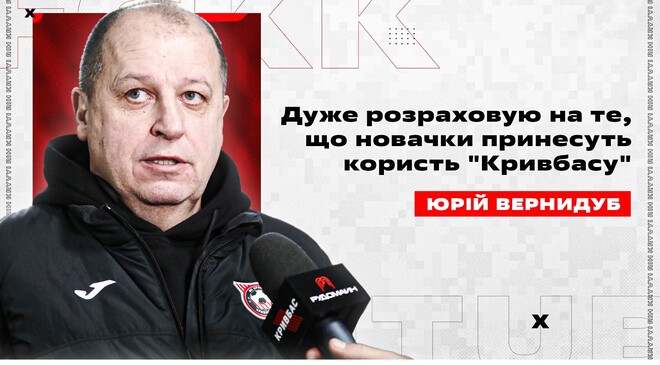 – Yuriy Nikolayevich, are the teams satisfied with the transfer campaign?

– Yes, we are slowly starting to replenish the composition. But there are also losses: Khoblenko went on loan to Karpaty, Zotko asked, wanted to leave. Nobody objected, so Ivan was released. Lovrich also went. As for Voloshin, nothing has been decided to the end. He will go to the training camp from Dynamo, and then time will tell.

As far as acquisitions are concerned, we’ve started off really well this year. They took a good central left-footed defender. Beskorovayny is a young promising football player who has made himself known in Europe. We really hope that he will quickly join the team and help us in the second round.

Everyone knows Lunev very well, including me. I also count on him. 24 years old is the age when you need to show yourself and move on. I hope that in Kryvbas he will take a step forward. Well, the third acquisition – Prikhodko. Krivoy Rog footballer, who is also well known to everyone. He will also do everything to take a place in the starting lineup and benefit Kryvbas.

We do not stop at these signings, we are working on some other areas. I won’t reveal secrets, but I hope there will be more replenishment,” Vernidub said.

It should be noted that Kryvbas left for the winter break at the ninth position in the UPL standings.

What games come out in 2023 on Nintendo Switch? Zelda, Fire Emblem, Kirby and more