Peugeot Inception: we saw the French electric car of the future

Among the stars of CES in Las Vegas this year, a homegrown creation, the Peugeot Inception concept car. Under a frankly futuristic look, it hides many clues about the Peugeot electric cars of tomorrow. We saw it up close and talked about it with Peugeot boss Linda Jackson. 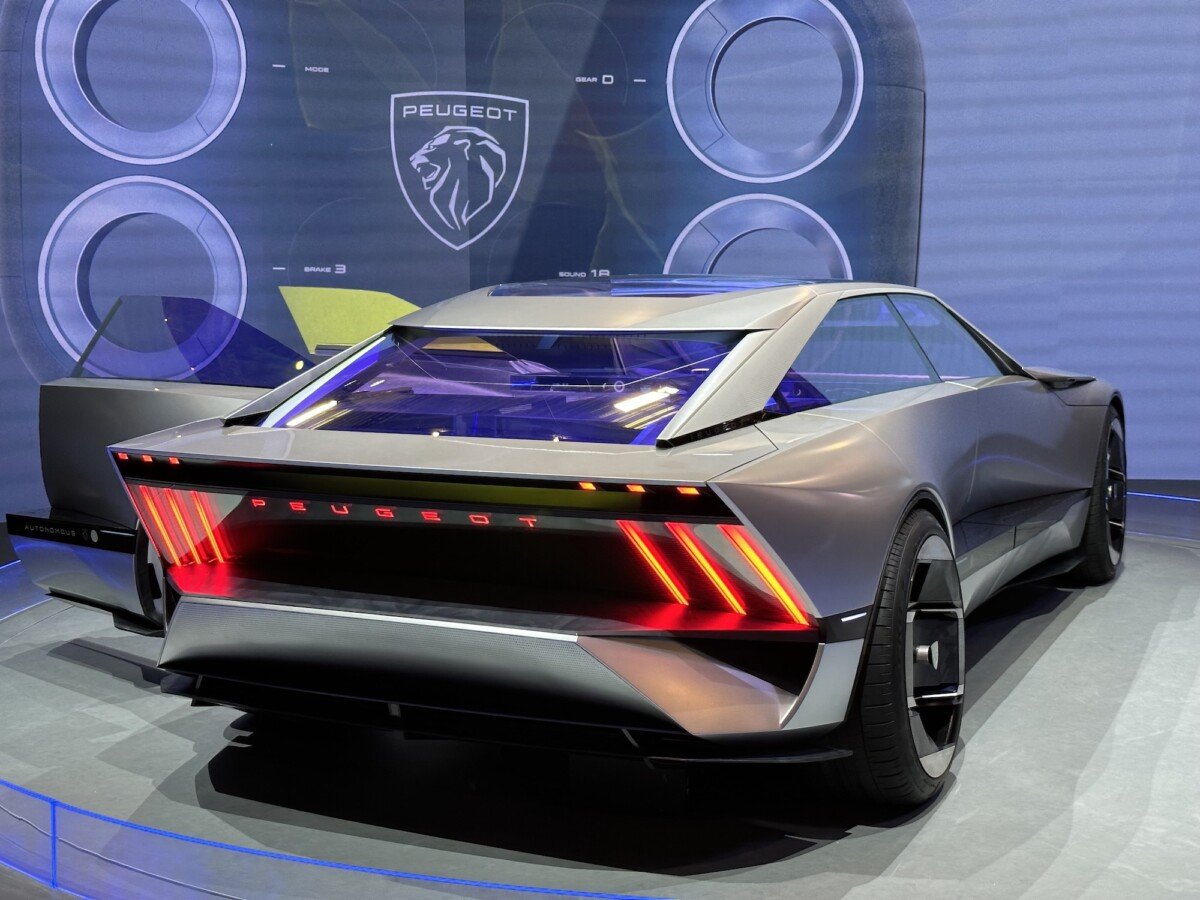 The truncated rear and the giant lights give a strong visual signature to the Peugeot concept.Even if Peugeot announces no return to the US market, the French brand has chosen the CES in Las Vegas rather than the Mondial de l’Auto to its Inception concept, announcing the brand new 100% electric generation to come within the brand and more broadly, the Stellantis group. A group that has 4 American brands: Chrysler, Jeep, Dodge and RAM among its 14 brands, including two dedicated to mobility.

Stellantis boss Carlos Tavares gave a keynote at the opening of the show where he shared his views on the future of the group, suggested the possible downsizing of operations with the development of electric and a potentially shrinking market because of the average purchase cost that is less accessible to the greatest number, and provided details on future generations that will contribute to the ambition of becoming the first in the sector to be carbon neutral by 2038. 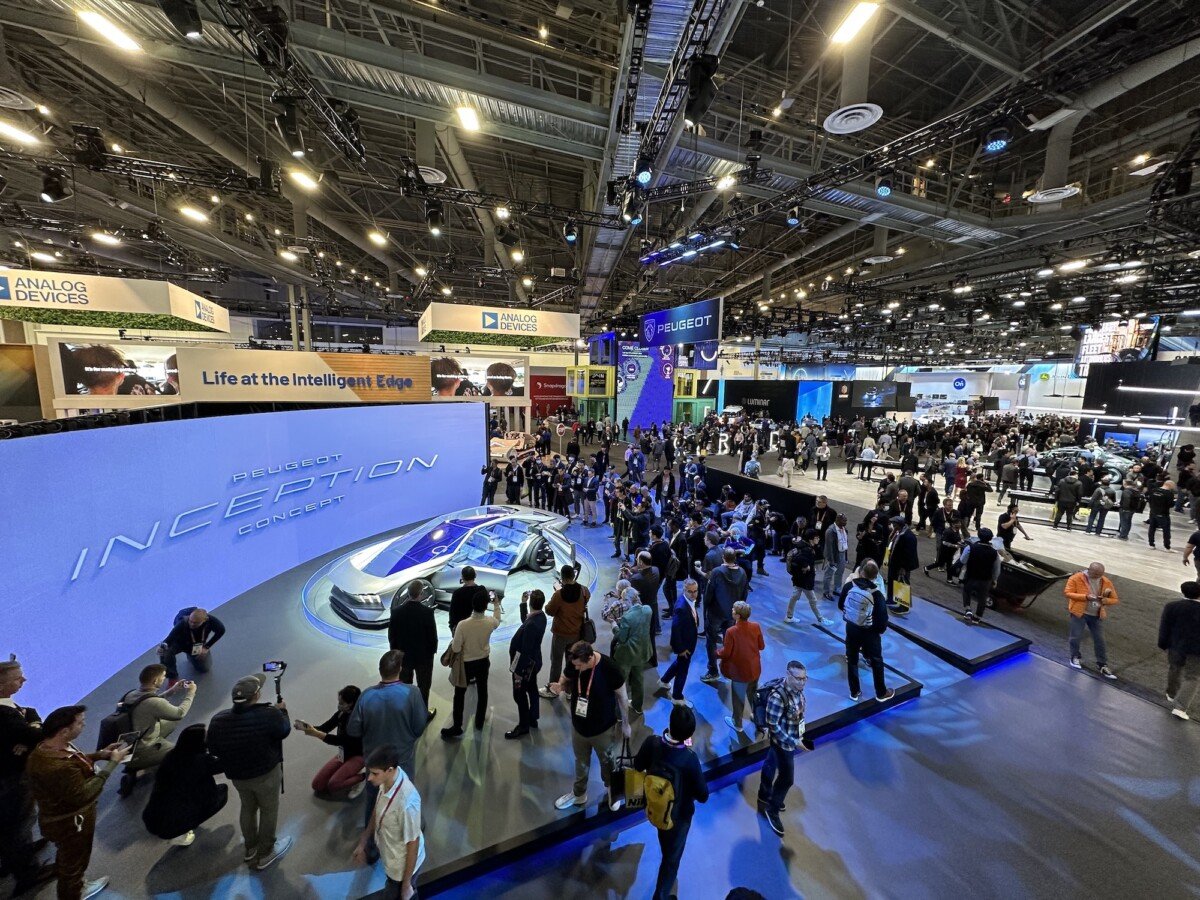 A mobility tech player with the size of a large group and the spirit of a start-up: this is the definition of Stellantis by its boss, just that! C. Tavares has confirmed work with Foxconn, Amazon and Qualcomm for its future cars.

He also focused on developments in battery technologies, with the collaboration with Factorial for the reduction of cobalt use. Objective 2026 with the long-awaited arrival of solid electrolyte battery promising 30% more energy density (50% for the next generation) and up to 800 km of autonomy.

This is precisely what is indicated in the technical sheet of the Peugeot Inception concept, Stellantis’ gondola head at CES, with its 680 hp. Thus the Frenchy brand succeeded in attracting all eyes with a particularly spectacular show car, a true manifesto of the future of Peugeot. Based on the XL version of the brand new 100% electric STLA platform, it aims to evoke the full potential of this new generation. 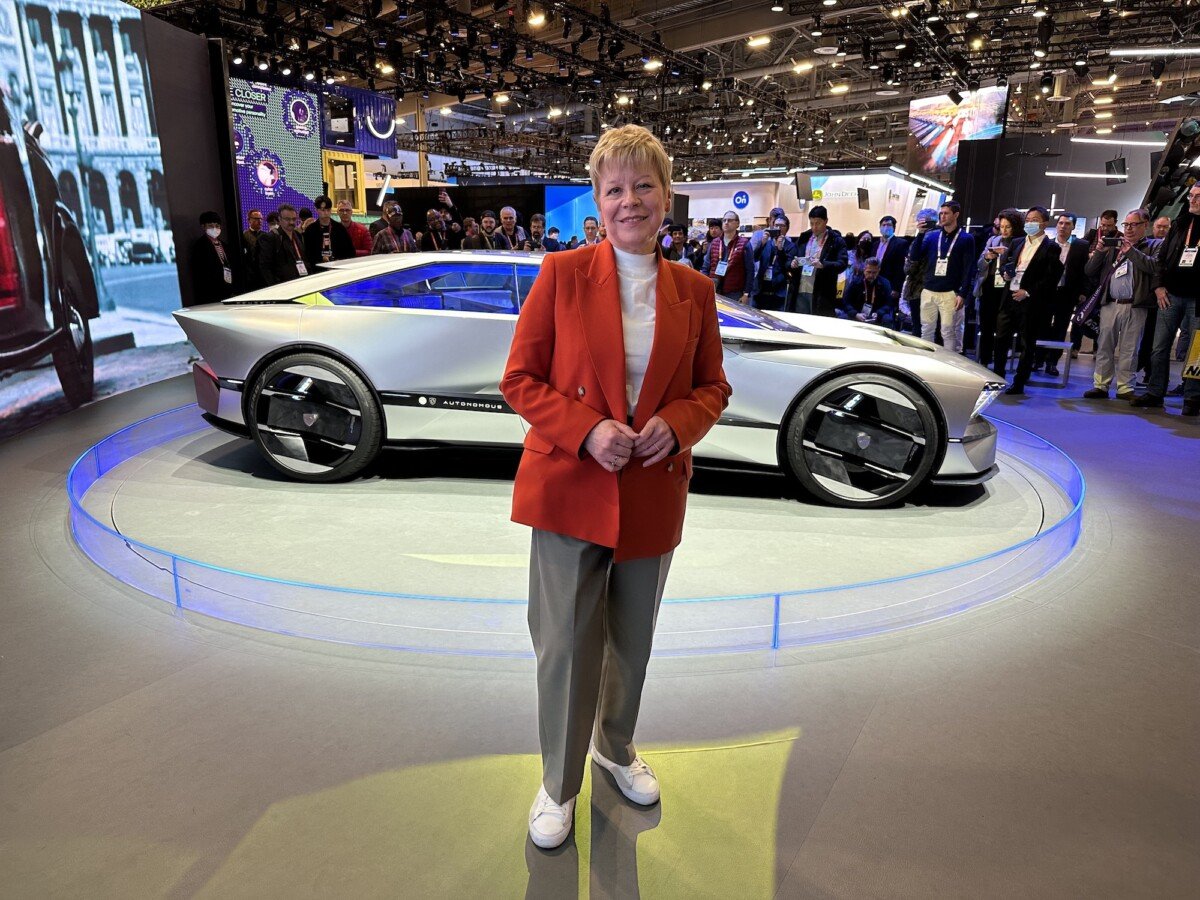 On the Stellantis stand, while the public rushes to discover the impressive Inception in American measurements (5 m in length), we were able to meet Linda Jackson, General Manager of the Peugeot brand. The Englishwoman has spent her entire career in the automobile before taking control of Citroën, then Peugeot for a year. “We chose to make such a big car because it was the best way to incorporate all the technology we wanted to show,” she explains. “We wanted to introduce sharp, angular lines but without overdoing it, adding fluidity. Future models will incorporate design elements from the concept. Allure is the new word to sum up the brand.” 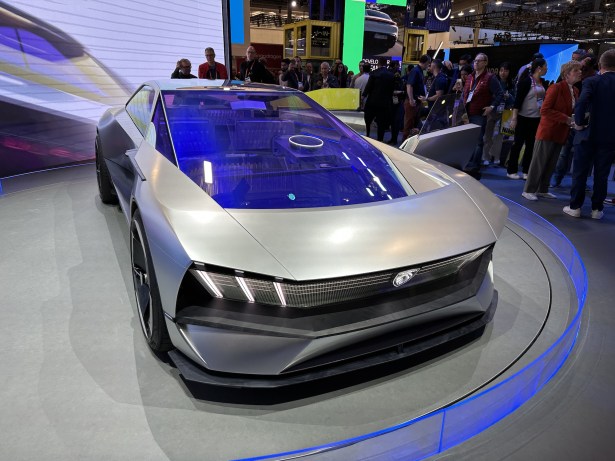 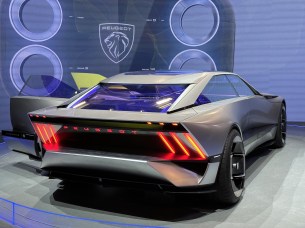 The truncated rear and the giant lights give a strong visual signature to the Peugeot concept. 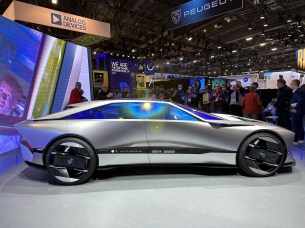 The thin side display is both aesthetic and practical.

By detailing the French concept car, we feel a first impression of aggressiveness especially due to its nasty front end with its very leaning grille, backlit and with only look, its vertical claws. The softness of the side lines and the surface treatments calm things down and the general look of the car, close to a coupe, very fluid, makes you forget that it is a four-door sedan. 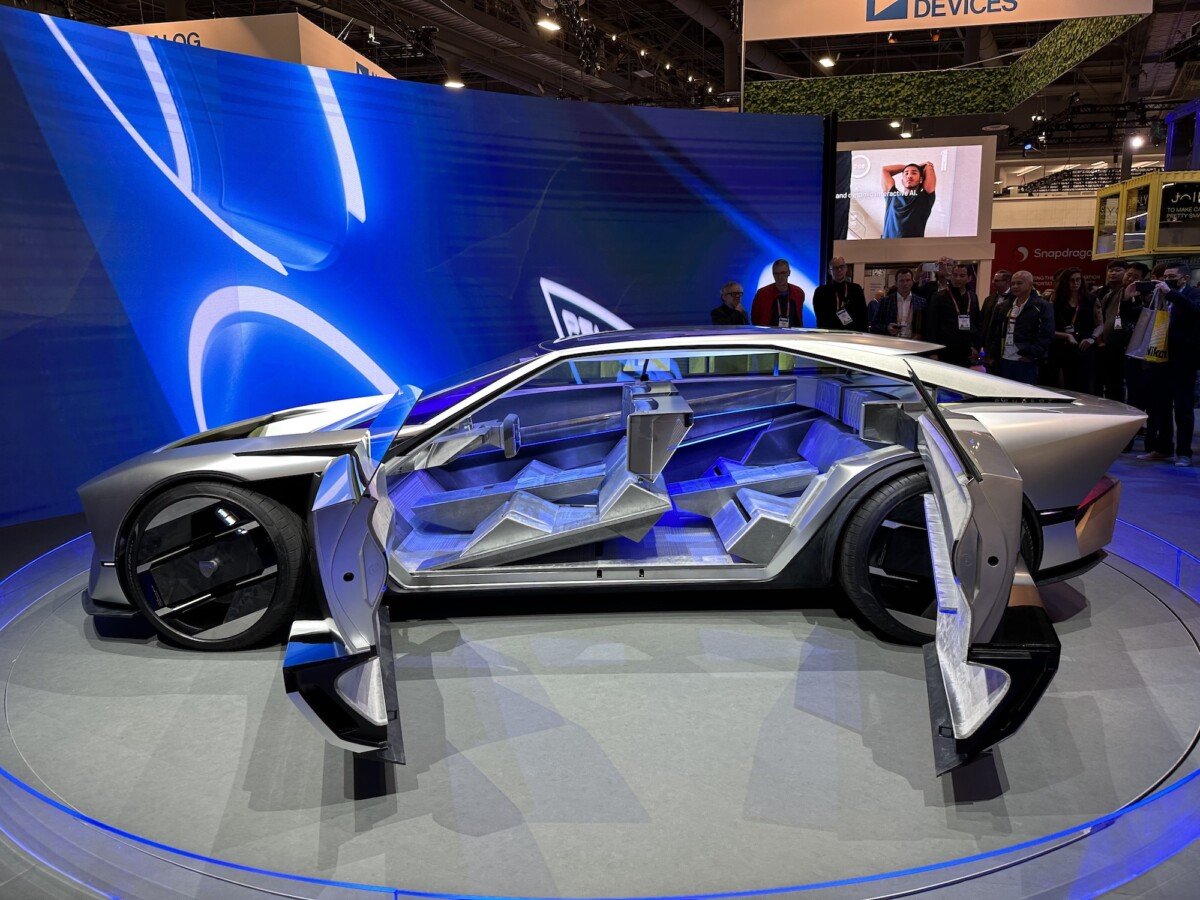 The huge glazed surfaces treated like the bubble of an astronaut helmet have attractive reflections, while the bottoms of the doors are covered with a line of screen displaying information such as the charge level or autonomous driving: both sober and spectacular, well seen.

The ultra-plunging windscreen, almost to the front of the car, gives a panoramic view of its cockpit. Unmistakable, the round display of the cockpit in white LEDs, as if placed on the dashboard, catches the eye, but lacks precision so that we can see the functions, supposed or real at the stage. The onboard system called STLA Brain will be regularly updated remotely, similar to smartphone OS updates on a regular basis.

The open antagonistic doors release the cabin largely and allow to better see the organization of the cockpit. In the shape of a steering wheel, the Hypersquare as Peugeot calls it is rectangular, pierced with 4 holes which are all touch controls for the vehicle’s functions. “We wanted to preserve the driving pleasure created with the i-Cockpit and the thinking led to the Hypersquare, which steers the wheels by wire. We’ve done a lot of testing, it’s like a console experience for our younger customers,” says L. Jackson. Which reminds us of Tesla’s yoke. 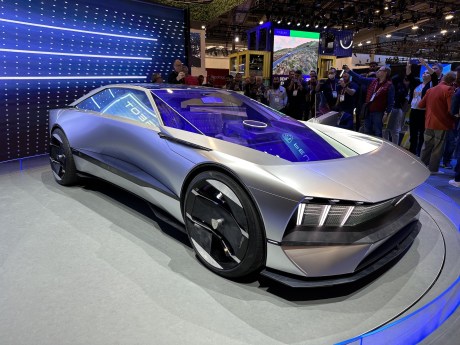 Very visible from the outside… 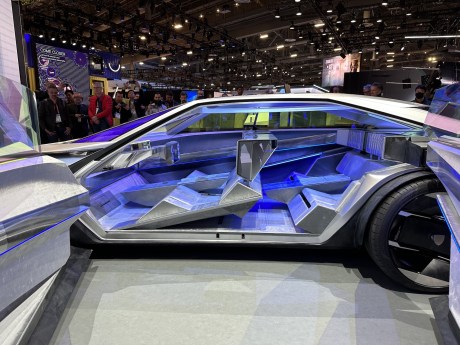 …the passenger compartment is very open.

Vast and clear, very modern and at the same time very cold with its raw materials (notably galvanized sheet metal), the actual living room which serves as the cabin is reminiscent of the world of furniture design. A luxury allowed by the space cleared by a true electrical architecture. Car seats that look like sofas? We weren’t allowed to sit there, too bad, because they looked very welcoming.

So, what to remember from this show-car that forces the line? Revamped ergonomics should find their way into production, with fully electronic steering allowing much more limited movements of the rectangular “steering wheel”. The controls (headlights, wipers, sound, infotainment, etc.) in the Hypersquare’s touch cavities also have a chance to become a new way of interacting with your car, replacing steering wheel buttons and stalk controls. classics. 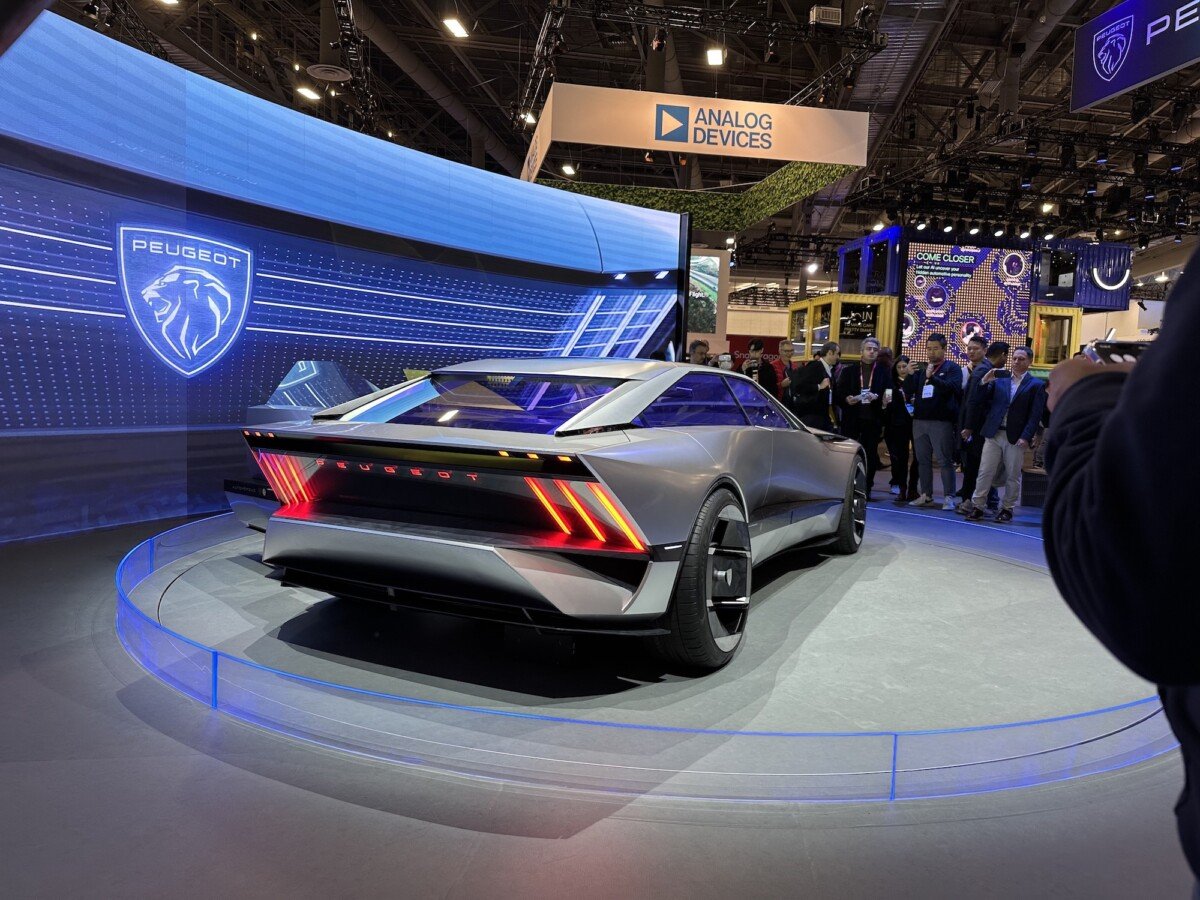 The design will also take the direction of what this concept reveals, with an even more marked style than today, just to stand out from the abundance of brands that we will see appearing in the coming years, especially in the more compact categories. , comfort zone of the Lion brand. See you around 2025 to see the result on the road. 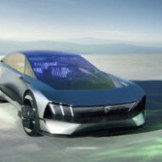 The lion firm is taking advantage of CES in Las Vegas to present a concept car that announces the future of Peugeot. On the program: a powerful 680 hp engine, a 100 kWh battery, a…
Read more

Do you like our media? Tell us in this survey!

Hogwarts Legacy: one of the actors speaks about the JK Rowling controversy and the reactions of the fans

Marvel's Wolverine not coming out in 2023? A Sony video proves Microsoft wrong

Upgrade your PC with this low-cost accessory pack