Ugis KRASTINS: “It was very important for us to start the new year with a win” 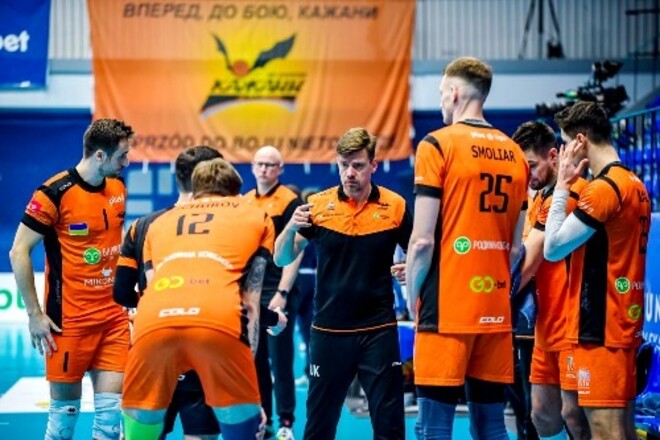 Volleyball players of the Lviv club “Barkom-Kazhany” this season have already played 20 matches out of the planned 30 in one of the strongest national championships of European countries, the Polish Plus League. As expected, the debut of the Ukrainians was not easy and the team is now in 13th place among 16 participants. We phoned the head coach of Lviv Uhys Krastinysh and asked him to share his opinion about past fights and the overall situation in the team.

– The atmosphere in the team is good, working, so there are no problems in this regard, – the mentor began. – The calendar of games is quite tight, taking into account moving to other cities, so there is no time to relax at all. Our “home” arena this season is in Krakow, where we are based. And sometimes you have to travel far. For example, in the last round we played in Suwalki, where we traveled almost 8 hours. We are already used to such a schedule, so all thoughts are only about how to play the final matches of the Plus League at a good level.

– You scored 18 points in 20 matches. What can you say about this result?

– When we first started talking about entering the Polish Championship, some local functionaries and specialists were rather skeptical about our chances that we could score at least a few points in such a strong tournament. And we already have 18 of them. It could have been more, because we lost 7 out of 8 five-set fights. Therefore, I think that our debut in the Plus League is quite worthy, and in almost every game our players try to impose a real struggle on their opponents. I really hope that we will replenish our points baggage more than once in the remaining matches.

– Before the recent 3-0 victory over GKS Katowice, you had a series of four defeats. And, alas, there have already been several such series in this tournament. How do you manage during this period to maintain morale in the team and tune in to the next matches?

– I want to repeat once again that we knew what we were going for and with what strong opponents we would have to play in the main league of the Polish championship. And a similar situation was predicted. So both the guys and the coaching staff were ready for this. And we always try to find additional motivation. For example, before the game with Katowice, players were told that it was very important to start the new year with a victory in order to improve their mood and recharge themselves with positive energy for the whole coming year. As you can see, it worked.

– During the tournament, the main load on the court is carried by 7 players of the starting lineup. Are you satisfied with their actions?

– I agree that seven volleyball players really spend a lot of time in matches. But this does not mean that other players are not involved. Everyone who is included in the application must be ready to enter the site at any time. Sometimes someone is better at the game, someone is worse. But we always count on each of them. As for the base players, here it is necessary to single out, of course, our diagonal Vasily Tupchiy. It is he who brings the team the most points. Our setter Murat Yenipazar confidently leads the game, young Dmitry Kanaev (libero) and Vladislav Shchurov (central blocker) are progressing. Reliable and another player of the first pace Artem Smolyar. Two players Julius Firkal and Jonas Kvalen also perform at a good level, although you always want to expect more from legionnaires so that other volleyball players are equal to them.

– In the Ukrainian Championship, you most often had to hold official matches in small halls, most of which resembled training ones. And here you play in large arenas, with a large crowd of spectators noisily supporting their teams. Have players already adapted to this?

– I think yes. At first, of course, it was unusual and somewhere the guys (with the exception of legionnaires) were a little constrained. But then they got used to it. Moreover, sometimes the support of opponents, on the contrary, turns on more, and the player wants to show all his best sides. So, this is all right.

– The next Plus League match you will play with the Kuprum team from Lublin, where the former player of Barkom-Kazhany Ilya Kovalev plays. Will this be an additional motivation for the Lviv team to beat him and his partners?

– In the first round we lost to Kuprum with a score of 2:3 and, first of all, we will think about how to take revenge on our rivals. Besides, now we are neighbors in the standings and the team from Lublin also has 18 points. Therefore, the main motivation is to win and get around it. As for Ilya, it will be nice to meet him on the court, as, by the way, it was quite recently in a match with the Warsaw club “Project”, for which another of our former players Yuriy Semenyuk now plays.

– Very soon matches of the Polish Cup in volleyball will be held. Will Barkom-Kazhany take part in it?

– Not. Only 8 teams will compete here. Six of them represent the Plus League and in order to get into this number, you had to be in the top six in December. Two more clubs represent the lower league. They went through a serious selection to get into the decisive phase of the tournament. The winner of the Polish Cup will be decided on February 26.

– And when does the regular season end?

– According to calendar 30, the final round will be held on April 1st. But we will play the game of this round with the team “Stal” from the city of Nisa on February 24th. Therefore, the tournament for us should end on March 25 with a home match against the club “BBTS” from the city of Bielsko-Biala, which we won in the first round with a score of 3:0.

– First of all, the end of this terrible war. So that there is peace again in Ukraine and we can play for our viewers in our beloved Lviv. For our part, we will try to do everything possible to please our fans with new victories.

Deliver Us Mars: Crew board the Zephyr shuttle in the new mission briefing

Aroged: The Pope believes that the Ukrainian side should resolve the conflict at the negotiating table

Hajime no Ippo on Netflix! The king of boxing will shake the ring

The premiere of “Scream 6” was postponed, but to an earlier date