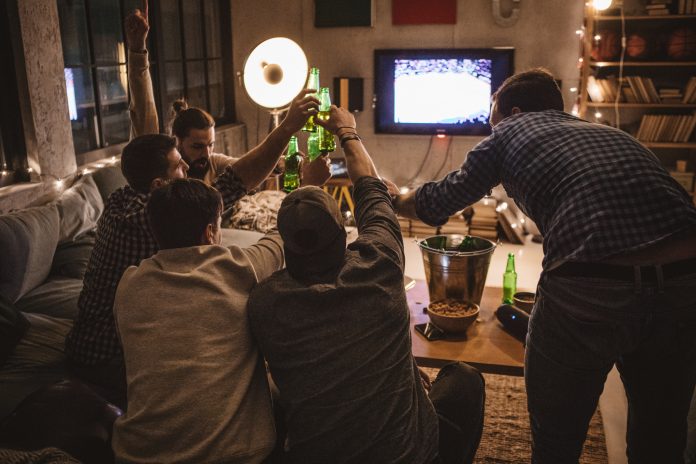 Group of young men gather at home party. They are watching basketball game on tv, drinking beer, making jokes and cheer for their team.

Football competitions such as the Premier League attract a large number of viewers every year. Those viewers don’t want to leave the streaming services behind.

According to The Daily Mail, Apple is targeting the rights to broadcast the Premier League. Specifically, Apple is preparing to bid for the broadcasting rights. Apple hopes to bring the competition and its viewers to Apple TV+. If the information from the Daily Mail is correct, it will become the fourth largest company currently hunting for the football rights.

It should come as no surprise that Apple is now suddenly participating in the bidding for the broadcasting rights of sporting events. Sky Sports, BRT Sports and Amazon Prime Video have been exciting football viewers in recent years. In recent years, the exclusive rights have mostly gone to Sky Sports, which is therefore allowed to broadcast all Premier League matches. What Apple is allowed to stream is the documentary series “Super League: Battle of Football” about the Primer League.

The Premier League isn’t the first sporting event Apple has set its sights on. In the summer of last year, Apple signed another deal with Major League Soccer – the American soccer league. That deal says all MLS games will be broadcast live on Apple TV+ starting this year.

Apple is therefore bringing a special MLS streaming service to their Apple TVs. There you will not only get matches, but you will also get weekly standings, analyzes and a look behind the scenes. It is also possible to rewatch matches or to briefly see all the highlights again.

For those who have a premium subscription with Apple, most matches from the Mayor League Soccer and the Premier League will be free to watch. For bigger games you will probably have to pay extra. Ordinary users will also be able to watch ‘a number’ of football matches without being billed.

The current deal between Premier League, Sky Sports and BT Sports will expire in 2025. For that reason, negotiations will be held between all interested parties as early as next year. The first Premier League football match will therefore not be shown on Apple TV+ until 2025 – and that is only if Apple actually acquires the rights.

Gotham Knights is returning to series, but it has nothing to do with the 2022 game!