A leak of the art book for the role-playing game Hogwarts Legacy provides information about game time and details about missions.

A lot of new information about Hogwarts Legacy has apparently found its way onto the web from the official artbook.

Details from the leak have been summarized on Reddit, providing information about game time, side missions, puzzles and more.

We have translated the list for you. As you read on, be aware that they may contain in-game content or mission details that you may not want to be spoiled for.

Details on Hogwarts Legacy according to the artbook

Different houses have different progressions on each main quest, but ultimately lead to the same outcome. Students from a particular house will therefore briefly visit Azkaban. The Avada Kedavra Curse can only be learned in a side mission after completing the main storyline at a very late point in time. Playing time is 35 hours for the main story. 70 hours of gameplay with side quest and for 100% of the game. There are almost 100 Merlin puzzles in the game. The puzzles are solved in a variety of ways and cover almost every spell the player has learned. If you look at the first game preview from September 2020, 90% of the things in it have been taken out or redesigned. Secret story behind the scenes The game folder was created in 2017. It was originally intended to include Quidditch and support all 4 Quidditch positions. Then after a year it was abandoned. Appropriate cuts are still necessary. The large map has been shortened by almost a quarter, the map blocks of the Highlands and Swamp areas are available again, but no longer playable areas. The game sales should be made as DLC if they are good. Headmaster Black doesn’t really play a big role, but he does have a fan-friendly part in the main storyline. There are a lot of side missions in the game, including three side missions in the main story. There is no fourth. Ravenclaw was thrown aside. The PS platform exclusive mission is really quite interesting, if you have the requirements it is recommended to get the PS5 version. The PS platform exclusive for one year is also available. Players can fly near/over Hogwarts Castle, but cannot mount or ride a broomstick to Hogsmeade town. Players can even catch the phoenix within the game. The side quests in the game are rich, or the gameplay tutorial is functional, or it has independent dungeon exploration and boss fights. It is recommended to complete as many side quests as possible before progressing in the main story.

Here is a picture of the map of Hogsmeade: 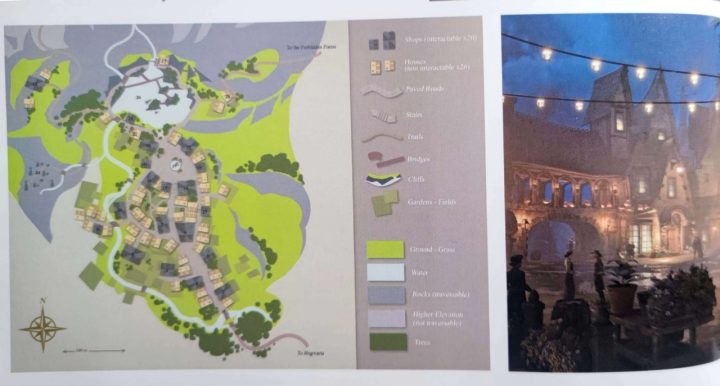 Aroged: The Callisto Protocol publisher withdrew the game from sale in Russia