The Lunar New Year is here – and of course it’s time to celebrate again in Overwatch 2. Blizzard has therefore given the starting signal for a time-limited seasonal event. 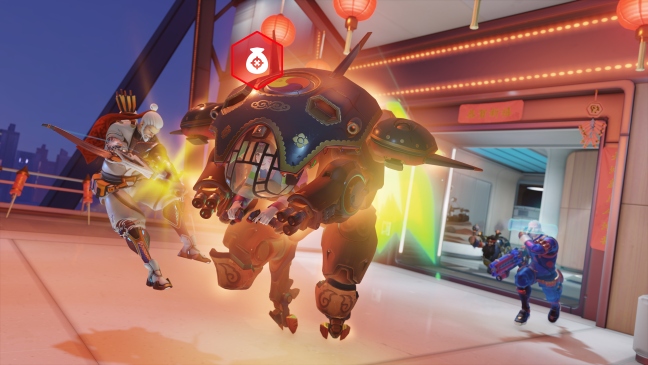 This year, the Lunar New Year once again brings fireworks and colorful costumes to the fore – and that’s being celebrated with a seasonal Year of the Rabbit event in Overwatch 2 as well. Yesterday, January 17th, the said event kicked off here, offering you new skins, festive maps, and the return of some popular arcade brawls. There are also other free rewards via Twitch.

Capture the Flag, Capture the Flag: Blitz, and Bounty Hunter game modes are now available in arcade brawls. The former is a fast-paced game mode in which you must capture the enemy flag while protecting your own. You can now jump into competitive flag capture. Work together with your team, earn high rankings in the rankings and earn ranking points to unlock golden weapons for your favorite heroes.

Capture the Flag: Blitz is an even faster version of the first mode. The flags are all placed near the center of the map. Quick decisions and moves are required here if you want to assert yourself with your team.

Last but not least, you can play the FFA Brawl Bounty Hunter during the Year of the Rabbit seasonal event. Whoever gets a kill first becomes a bounty target and can earn even more points with subsequent kills.

The Year of the Rabbit also marks the conclusion of Overwatch 2 Season 2. Season 3 will again be packed with new content to be revealed soon.

Overwatch 2 gets a time-limited FFA mode with Battle for Olympus.

Bosch Professional battery 18V: Save up to 50% on cordless screwdrivers, drills, saws and angle grinders

Park Beyond: New trailer for the amusement park simulation

Death Stranding 2 revealed at the TGA? Another teaser from Hideo Kojima