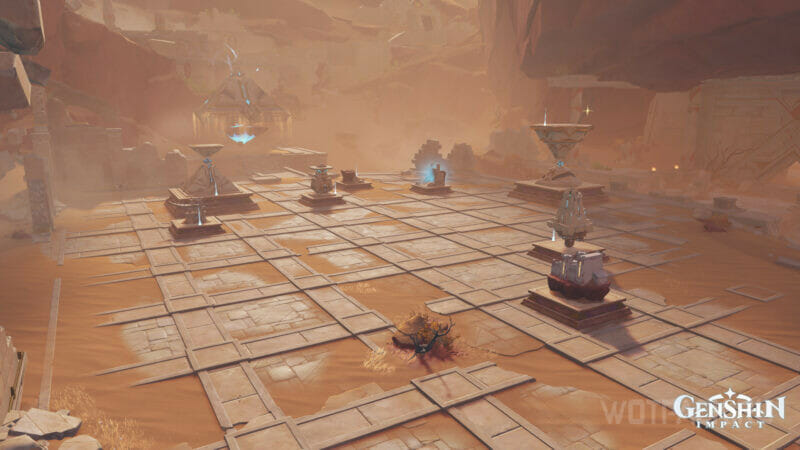 Genshin Impact Chessboard Pieces – Quantity Quest Items 5 items. The Traveler finds the first and subsequent chess pieces in the process of completing tasks from the Requiem Bilcis chain. They are needed to unlock the quest “Memory of Gurabad”.

This guide will show you how to find all the chessboard pieces in Genshin Impact and explain how to use them.

How to open the chessboard in Safha Shatranj in Genshin Impact

The chessboard will become available during the mission “Temple where the sands flow like tears”, after the Traveler and Jeht go to the northern temple, located on the territory of Safkhe Shatranj.

Where to find all chess pieces in Genshin Impact

The pieces that are installed on the chessboard can be found in the process of completing the quests of the Bilcis Memorial Service chain and other tasks in the world of Sumeru related to the Tanit tribe. 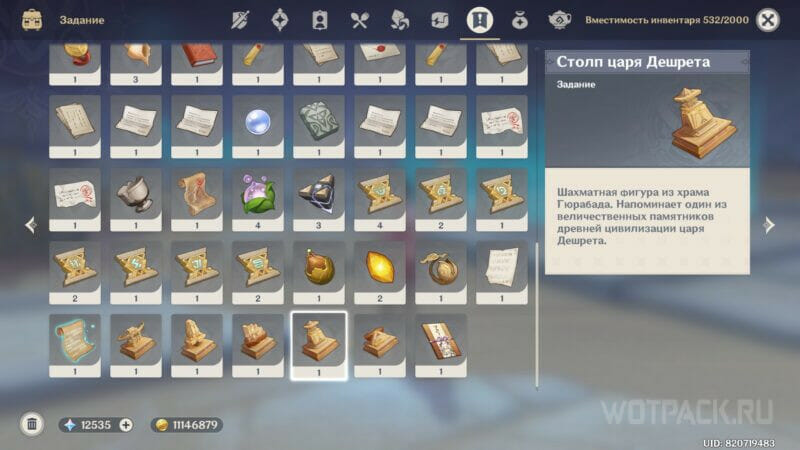 A large chest, in which the desired item is hidden, will appear after meeting Lilupar, in the final part of the quest. In addition, the “relic” can be obtained later if it was skipped or ignored – more about this was described in the guide to obtaining the Pillar of King Deshret.

Exercise: “Abundance under the sand dunes 1”. 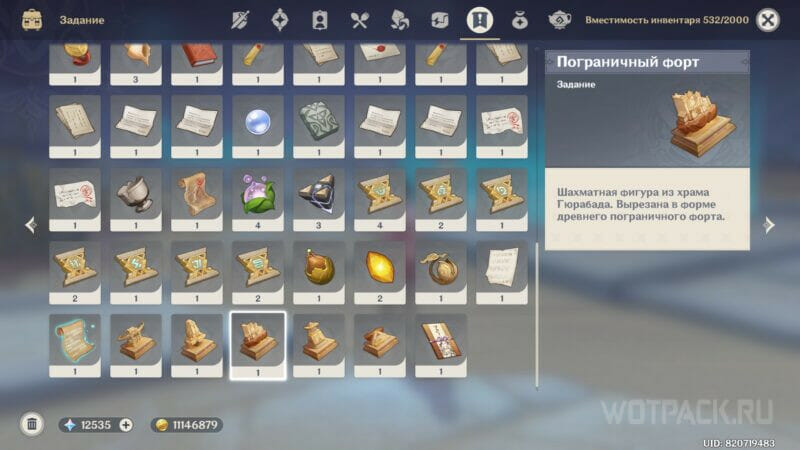 Can be found inside a large chest after obtaining the first genie fragment and killing a new desert enemy – sacred scorpion. It is almost impossible to miss an item, because before the battle with the enemy, the treasure box is not in the arena. However, if this happens, see the separate guide for how to find the Frontier Fort figure after completing the quest.

Exercise: “Abundance under the sand dunes 2”. 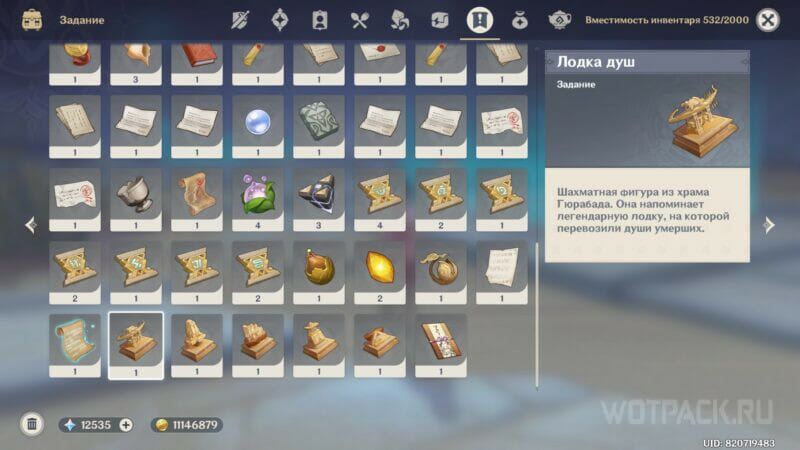 A large chest with the item you are looking for appears in the process of studying the central area of ​​the mysterious ruins, parts of which are filled with purple flowers. According to Lilupar, they were grown by the Lady of Flowers sleeping in the Oasis of Eternity. Missing a chess piece is easy enough: in a separate guide, they told how to avoid it and pick up the Boat of Souls.

Exercise: Abundance under the sand dunes 3. 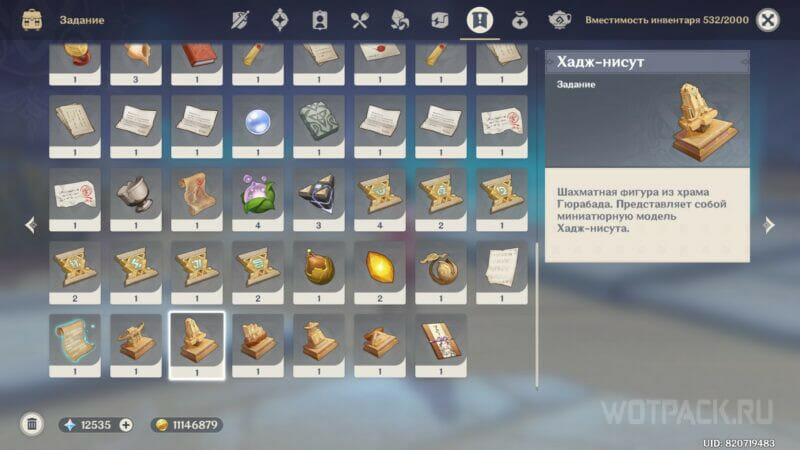 Associated with one of the most difficult puzzles to open the ancient door in the central part of the ruins leading to the abode of the Lady of the Flowers. Large chest appears at the endand the entrance to the dungeon, in which you can later stumble upon it (if you missed it during the quest), is discussed in the guide to finding Haj-nisut. 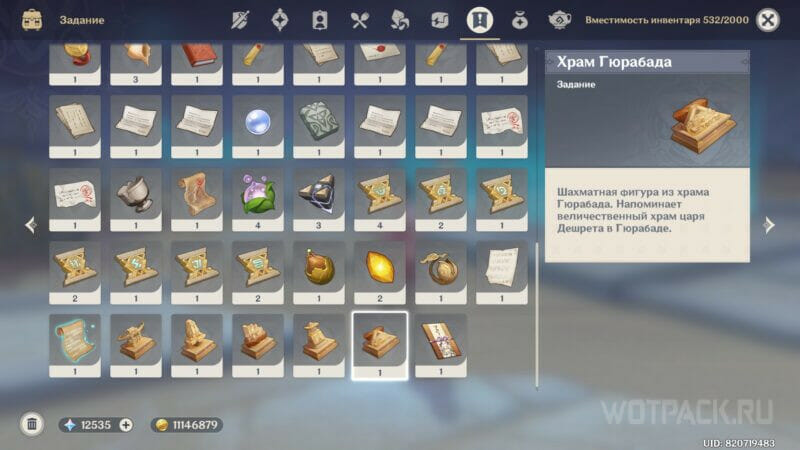 The only figurine that can be obtained after completing the chain of quests related to the search for the Oasis of Eternity. However, before approaching it, you will have to complete another task of the world, called the Tadle Falcon. In a separate guide, they showed the exact location of the Temple of Gurabad item, fixing the moment when it becomes available.

How to put pieces on a chessboard: opening a quest

When all the chess pieces are in the Inventory, before placing one of them on the chessboard, we recommend completing the “Falcon with Folded Wings” quest.

This condition is necessary for the subsequent access to the mission from the Lost Apocalypse chain.

After making sure that the quest is completed, use the nearest teleportation point to Safkha Shatranj and plan to the chessboard, which is a huge arena made of stone slabs. Along the way, use the four-leaf symbols to get there faster.

Once in place, Lilupar will note that it is necessary to place chess pieces in the cells “protected” by the illusory wall. Approach the “blocked” tile and press interaction button (default “F”). After – “Confirm».

Thus, a suitable figurine will immediately be placed in the right place.

After installing all the chess pieces, a cut-scene will start. Lilupar will warn you that it’s time for training – two primordial structures will appear on the arena.

It – job start “Memory of Gurabad”.

How to activate chess pieces

After installing the chess pieces, it is possible to activate them. This requires special Activating devices – each figurine has its own name. All of them are scattered across the Sumeru Desert. 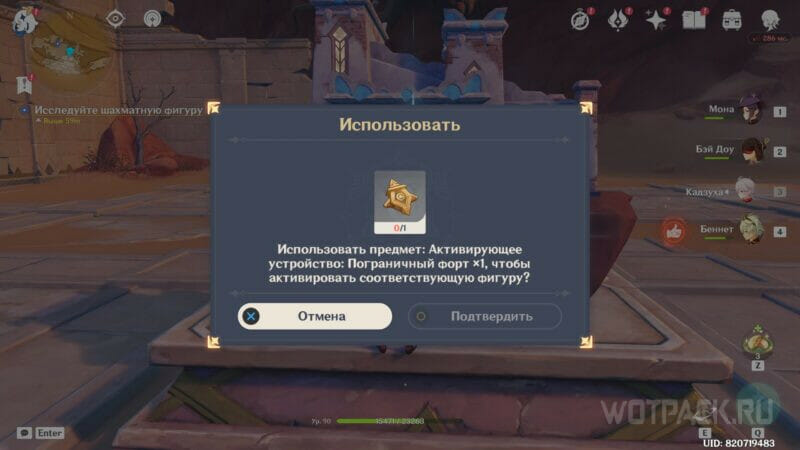 Hopefully, with our guide, you have learned how to open the chessboard and place chess pieces in Genshin Impact. Write to comments in case of questions, the author will try to help. Follow the current walkthroughs and guides on the game on our website.

Forspoken: IMDA Singapore rates the game as 18+ due to heavy profanity

Gran Turismo 7 on PSVR2 will not suffer cuts: all the details from Yamauchi

Age of Empires 2 and 4 arrive on Xbox Series X, S and One. Microsoft listens to the fans. Release date revealed

Rumor Mill: Is PT Living On & New Uncharted In Development?