Google Stadia has permanently closed its doors, servers shut down

Google Stadia has closed its doors for good today, 19 January 2023, at 9.00 am Italian time. The servers have been shut downwhich means that users will no longer be able to access their library of games, which will hopefully have been ported to other platforms in the meantime, where possible.

As you know, the update that activates Bluetooth on the Google Stadia controller is available, which therefore will not become an unusual ornament but may continue to be used on PC, Mac and Android even wirelessly.

In recent months, Google has launched a refund campaign for the purchase of games, digital content and hardware in order to compensate users who bought products from the official Stadia store but will be unable to use them from now on. 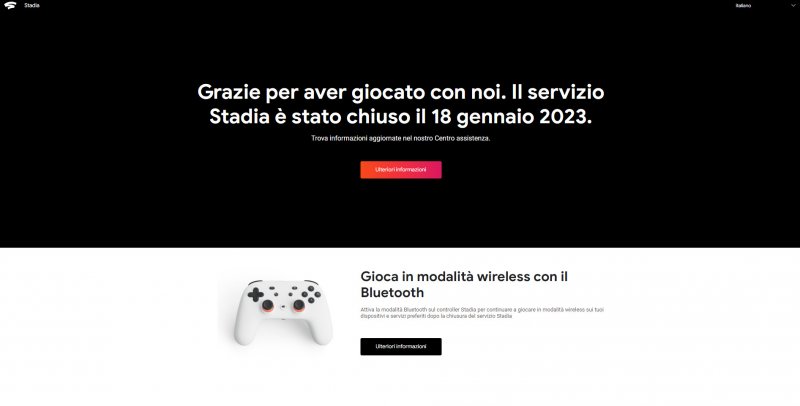 Google Stadia, the message that appears on the official website

The announcement of the closure of Google Stadia came at the end of last September, but few were surprised given that a few months earlier they had been decommissioned development teams and all first party projectsinevitably condemning the streaming platform to this fate.

While being able to count on a particularly sophisticated and superior transmission technology compared to the competitor’s cloud, Stadia has never managed to take off due to a inappropriate business model to the kind of experience promised by Google, still linked to the purchase of games at full price rather than some form of all-you-can-play subscription.

Anno 1800 - In March, the Console Edition will finally start building away from the PC - Cerealkillerz

Winter: the magic solution against fogging on glasses