Square Enix Collective, FuturLab and Crystal Dynamics announced that all Powerwash Simulator players will receive a free Tomb Raider Special Pack on January 31st. The soothing simulator will also be released for PlayStation 4, PlayStation 5 and Nintendo Switch on the same day. 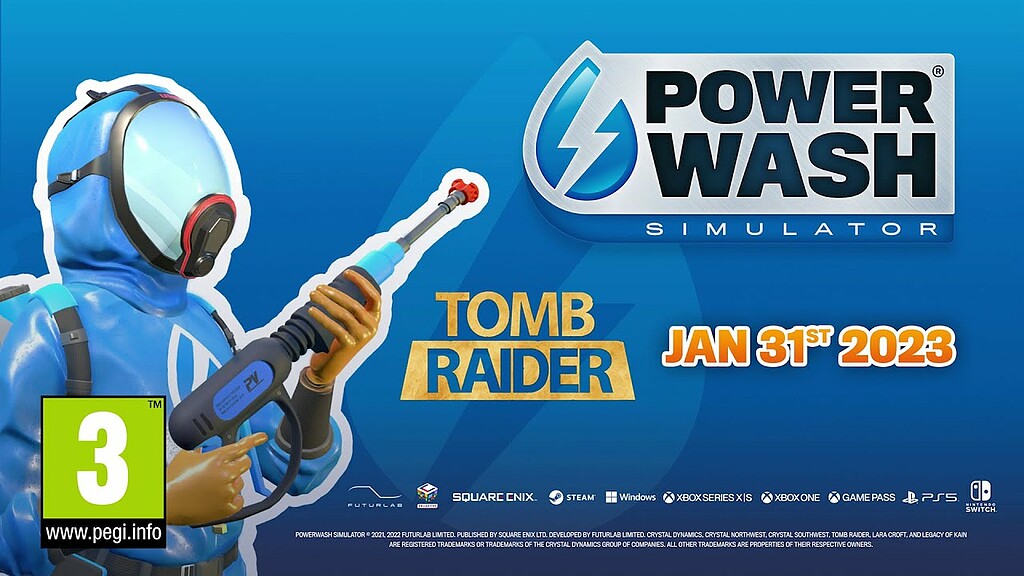 A trailer already shows what awaits us here. So Croft Manor was accurately recreated and shipped to the “Powerwash Simulator”.

“Powerwash Simulator” is currently available for Xbox Series X|S, Xbox One and PC. The title will also be released on January 31 for PlayStation 4, PlayStation 5 and Nintendo Switch.

Powerwash Simulator is a delightfully enjoyable simulation game that puts the power of relaxation in the hands of players. They can finally take a break from the real world and follow their powerwash destiny. With the pressure washer in hand, players will unlock new tools and upgrades that will help them clean more efficiently – no dirt can withstand them!

In the town of Muckingham, looks can be deceiving: an active volcano simmers nearby, the mayor’s cat has disappeared and everything is terribly dirty. For all its quirks, Muckingham is pretty clean… thanks to the players! The locals have noticed, too, and soon their powerwash business will thrive.

As players blow away every speck of dirt that taints Muckingham, they uncover secrets hidden in the dirt and items in each level. They receive messages from customers telling the hidden stories of the places they visit – from humble houses to ancient architecture. It’s like they say, everything comes out in the wash!

Lost Ark: The latest update has made players lose their minds, literally

Nintendogs could return, on smartphones and tablets: new phenomenon coming?

OpenAI CEO Sam Altman on GPT-4 chatbot: "People beg for disappointment and they'll get it"

Realme 10 Pro: prepare yourself for this range of Android smartphones