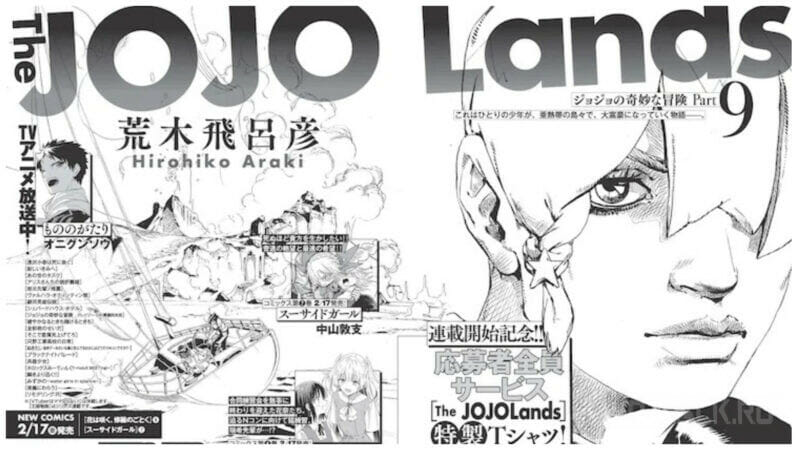 Ultra Jump in its February issue, published the first teasers for the long-awaited 9th part of the manga JoJo’s Bizarre Adventure with the subtitle “JoJo Lands» authored by a famous mangaka Hirohiko Araki.

The continuation of the legendary epic about the Joster family tells about a guy who will become the most important rich man on the subtropical islands. The JoJo Lands will continue the reboot of the franchise, which began with Part 7 of the Steel Ball Race and continued with Arc 8, subtitled JoJolion.

The reboot was generally warmly received by JoJo fans. The Steel Ball Race became the franchise’s highest rated arc, and JoJolion continued its success as Araki Sensei’s most ambitious creation yet. It is likely that JoJo Lands will repeat the success of previous arcs and break into the first lines of the ratings with a swift jerk.

There is already a manga card on Shikimori and a news column has been started. Also, the network already has the first chardis of the protagonist, which look promising and very stylish.

After F-1. Vettel doesn't mind trying his hand at rallying

Overwatch 2: How is the PvE campaign actually doing?

Steam has launched several sales for the Lunar New Year