Endless Dungeon is available for purchase in Standard edition for € 29.99 or in edition Last Wish for €39.99. The latter gives early access to the closed beta of the game immediately and 48 hours of early access to the full version. Allows you to play OpenDev scenarios, give away pins and G2G avatars. It also adds the Pioneer Elite skin pack, the Die-Hard Elit skin pack and the original soundtrack. Finally, the package also includes the official catalog with the artwork of the game.

ENDLESS Dungeon is a unique mix of roguelike, tactical action and tower defense set in the award-winning ENDLESS universe. Enter an abandoned space station, alone or with friends in co-op mode, recruit a team of shipwrecked heroes and protect your crystal from endless waves of monsters… or die trying, reload and try again.

We have turrets and weapons
You are stranded on an abandoned space station full of monsters and mysteries. To get out, you’ll need to get to the Core, but you won’t be able to do so without your crystal bot. This slithering creature is the key to survival in the procedurally generated rooms of this space ruin. Unfortunately, she is also a fragile soul and all the local monsters are after her. You’ll have to think fast, plan well, place turrets and then… fireworks! Bugs, bots and blobs will stop at nothing to turn you and that crystal into dust and debris. With a variety of weapons and turrets to choose from, the right equipment will make the difference between life and death.

Leave alone or with friends
It is possible to face the horrors of the Station alone, or in a team, facing the challenge in 3-player cooperative mode. Once you have your group together, plan your moves. For weapons you have a wide choice, ranging from flamethrowers to snipers to poison. Once you’re ready, enter the Station to take on a character’s mission, attempt to escape, or simply rampage against the locals. You’ll probably die trying, but that’s the way things are in this space dungeon! 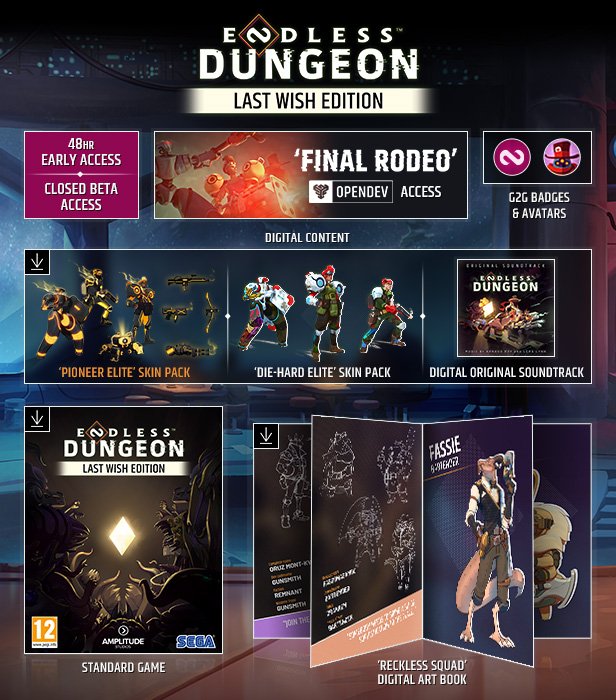 The contents of the Last Wish edition

Gather your team of daredevils
Get ready to meet a colorful cast of heroes all aiming for the same goal: get out of hell! Everyone puts their cards on the table. There’s the damage-absorbing tank Bunker, the fiery Blaze who loves to blow things up, or maybe Shroom who will heal his teammates with his “unusual” incense. Choose your heroes to build the team that’s right for you. As you get to know them, you’ll discover that they all have particular motivations and secrets…

Monsters, dangers, secrets and treasures, oh my!
Escaping means overcoming all the dangers of the Station. Yes all. Deadly robots, ruthless monsters, loot and giant beasts await you at every corner. The further one enters this pile of wreckage, the more one discovers its tragic history. Why does the Station attract all ships that get too close? Why do you come back here every time you kick the bucket? No matter how familiar you are with the ENDLESS Universe, the Station has many stories to tell.

The more you die, the more you grow
I’m sorry to tell you, it won’t be easy and you may die…often. But that’s okay, because every time it happens, you get reloaded in the Saloon. Think of it as your operations (and drinking) hub, where you can upgrade your heroes and weapons, unlock new paths to the Core, chat with the locals, listen to music, and drink delicious power drinks. Then, go back into the Station and try to get out… again.

Ubisoft CEO annoys employees: there will be a strike on January 27, 2023

Price overview: how much will you pay for a video card in early 2023?

Age of Wonders 4 fantasy strategy game has been announced, and you won’t have to wait long