In 2022, the venerable Lord of the Rings Online caused a surprising exclamation point when the online role-playing game was able to attract thousands of players to Middle-earth with significantly more Free2Play content. The developers’ annual review and outlook on the official website is correspondingly euphoric:

“2022 has been quite an amazing year for The Lord of the Rings Online. We celebrated our 15th anniversary and released the Before the Shadow mini-expansion, which introduced the game with a new starting area, the exploration system, a new six-player dungeon, added Skirmish mode and so much more. We’ve welcomed new players, rejoiced in old hands, and we’ve continued to expand our living Middle-earth.”

02:24
LOTRO: Anniversary Trailer looks back on 15 years of Lord of the Rings Online

However, most of the post revolves around the future of Lord of the Rings Online, and those in charge at Standing Stone Games have ambitious plans:

“When we look at where we are in the development of the game, it’s clear that there are areas, systems and experiences that need a little polish. And it’s also clear that there is content for maxed-out characters and that you just need new fodder. Our focus for 2023 is to adapt some of these experiences to more modern expectations. We want to expand and advance the game world, story and development of the game to start well into the next 15 years. We have four content patches planned for 2023, all working towards the release of our next major expansion later in the year.”

Roadmap to the fourth quarter of 2023

You can check out the full roadmap for 2023 in the image below. 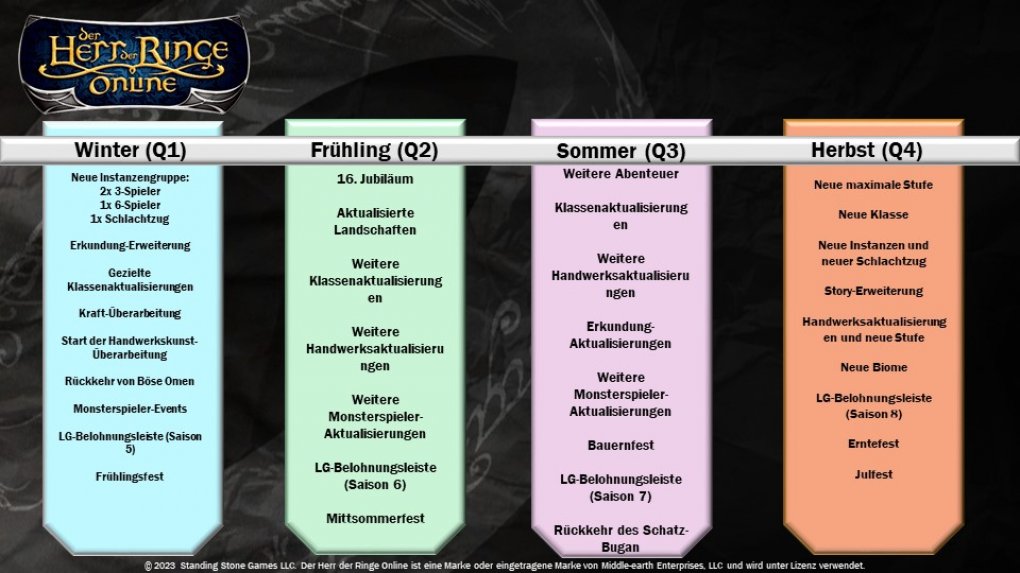 The roadmap for Lord of the Rings Online in 2023 is packed with content to be released over the next few months. Source: Standing Stone Games

You should pay special attention to the fourth quarter, because then the next major expansion for Lord of the Rings Online will be released, which will take you south to the shore of the Corsair Kings, to Umbar. In the luggage:

If you’re hoping for new content, you don’t have to wait until the fourth quarter. Already in this quarter the way leads you to Angmar. “More specifically, we head to the city of iron in the poisonous wastes of northern Middle-earth: Carn Dûm. There, in the shadow of a great citadel, a power vacuum has emerged and the diaspora of evil beings thirst for guidance and direction. New enemies vie for the Power, and the Free Peoples must prevent a single ruler from rising in the devastated city.”

WotLK Classic, FF14 Patch, LOTRO Remastered, Dune MMO, Diablo 4: We look back on August 2022 in the video for MMO fans.

Fans of Lord of the Rings Online can expect a graphics update, a new leveling experience and more soon.

In the spring and summer months, the focus of the Middle-earth heroes then shifts to the growing threat posed by the opponents of the next major expansion. Gondor, currently at relative peace, needs help rebuilding and investigating strange happenings. The developers introduce a new version of Gondor. You can also expect class updates, crafting system overhauls, monster play optimizations, and battle stats adjustments.

In summer, new adventures await you in the Wings Games (working title) feature, new festival rewards for the Peasant Festival, new rewards for the Treasure Bugan event, and an expansion of the exploration system to higher difficulty levels. In addition, the developers will complement the 3-player instances introduced by “Return to Carn Dûm”. The changes to the crafting system continue and further improvements are made to the monster game while the final preparations for the launch of the new expansion continue in the background.

The Epic Games Store is giving away Star Wars: Squadrons