The Only Harmony for an Irreplaceable Soul in Genshin Impact Walkthrough 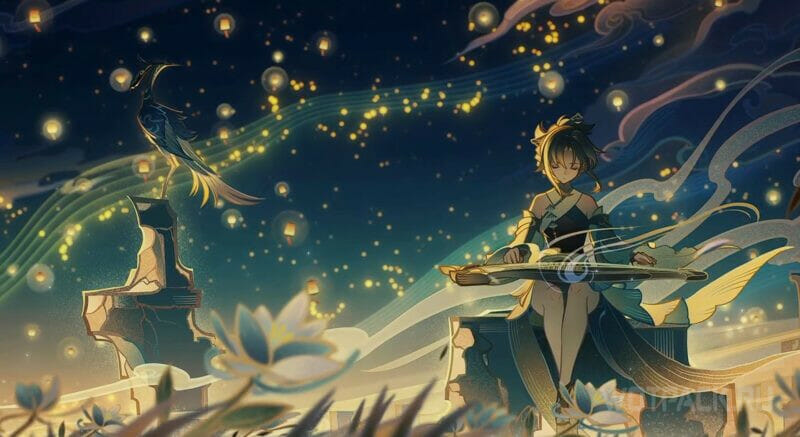 The Only Harmony for an Irreplaceable Soul in Genshin Impact is the second story quest of the Night Harmony of Strings event, in which the Traveler and Gan Yu visit the Guardian of the Clouds to learn more about the girl from Dvorak’s story. Complete the final preparations for the concert, and also find out who the mysterious stranger from the legend of the “Lady of the Lake” was.

In the article we will tell you how to complete the quest The only harmony for an irreplaceable soul, give bamboo shoots to Zhong Li and take part in the Sea Lantern Festival.

How to start The only harmony for an irreplaceable soul 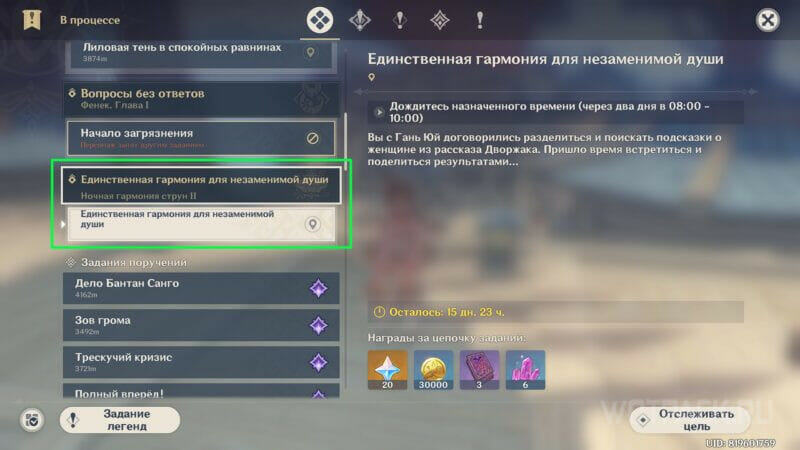 You can start the task The Only Harmony for an Irreplaceable Soul after completing the previous quest “A Thousand Miles Following the Mysterious Melody”. After that, the current mission will automatically appear in the quest log, from where it can be tracked.

The heroes agreed to split up to look for clues about the girl from the story of the musician Dvorak. Now it’s time to meet and discuss what we’ve found out.

Change game time to day after tomorrow between 8:00 and 10:00 morning (if done earlier or later, it will not count).

Go to the teleport near Li Yue Harbor opposite Tianheng Mountain and hover towards the brown building on the map. Gan Yu is already waiting on the spot. 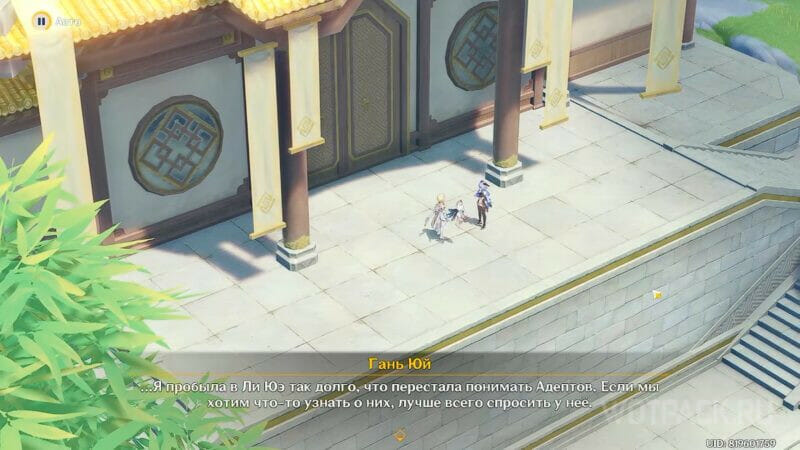 The girl shares her thoughts on the legend and suggests that one of the Adepts could have performed such a melody. The heroes decide to visit the Guardian of the Clouds to get more information.

Teleport to the point located on Mount Aotsang and fly to the left to the mark near the stone cliffs.

The Guardian will not be here, but instead of visiting every Adept, Paimon suggests repeating the incident from the story and pretending to be drowning so that the savior will appear himself. The Traveler acts as a test subject.

Swim to the middle of the pond

Dive into the water and swim to the indicated point on the other side of the pond. If stamina is too low, you can go around the lake from the other side – the main thing is to swim for a while in the desired zone and wait for the end of the dialogue.

Eventually, the Traveler would end up on the surface, surrounded by excited Xiao and Shen He. Paimon will explain the situation and tell them that in this way they just wanted to find the Adept. In response to this, Xiao will ask you not to do such things again, and hastily leaves. 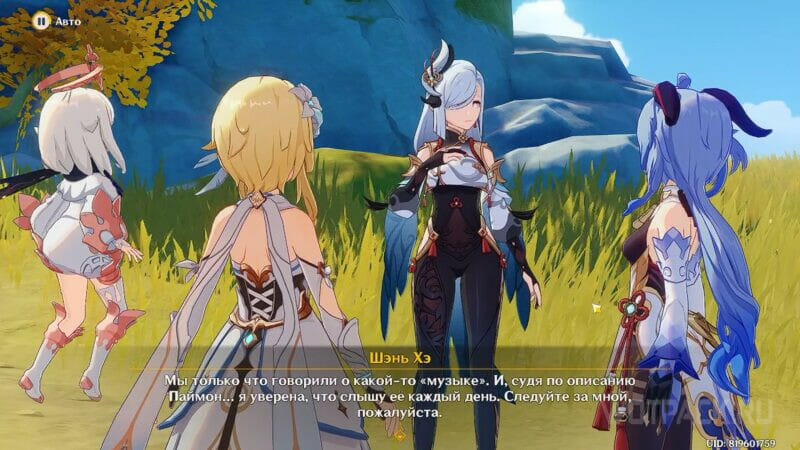 In the meantime, Shen He shares information about the whereabouts of the Guardian of the Clouds. It turns out that the group missed her just recently. Therefore, Gan Yu decides to leave a note so that the mentor can find them herself. Asked by Paimon if Shen He encountered the melody in these parts, the girl recalls that during training, she repeatedly heard wonderful music. The heroes decide to go there. 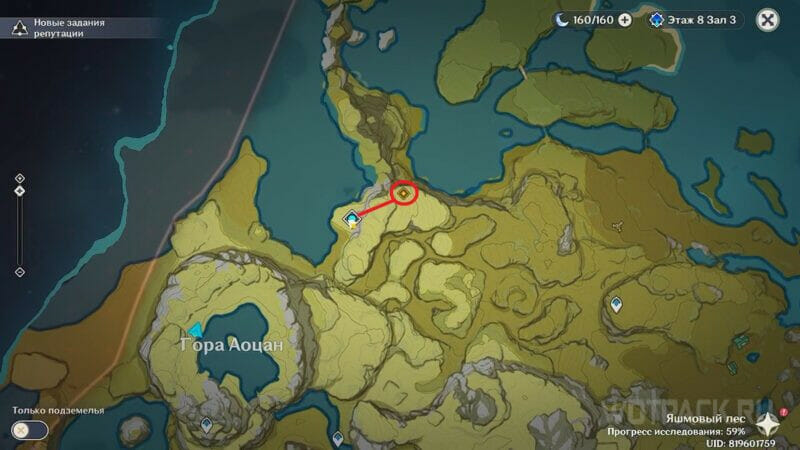 Teleport to the Clear Water and Mountain Cave dungeon, go a little to the left and climb up the cliff. Then approach the ledge to start a dialogue.

The rest will not hear any sounds here, because Shen He did not mean specific music by this, but the singing of birds and the rustling of leaves, that is, the sounds of nature. To better explain which tune was meant, the Traveler hums lines from Yun Jin’s speech at the previous Sea Lantern Festival.

The dialogue is interrupted by the appearance of the mentor, who received the letter. She knows who Dvorak’s legend is about and offers to follow her. The heroes say goodbye to Shen He and go to the place indicated by the Adept.

Go to the specified location

Make a teleport to the dungeon “Abandoned Ruins”turn around and run straight to the shore.

The Guardian of the Clouds begins the story of the old days and his old friends. Gui Zhong (the Archon of Dust who died in the war) and Lord of Songs and Wanderings (now known as Madame Ping). Here you can also watch a cut-scene in which the Adept shares his memories of happiness and regret.

Gui Zhong believed that mechanisms cannot replace real composers, but they are quite good at creating simple melodies. While the Lord of Songs and Wanderings believed that music is only an expression of the soul. In order to resolve their dispute, the Lord of the Stone took away the bell that Gui Zhong had created for performing rituals. As a result of the war and the death of the Archon of Dust, the bell was given to Madame Pin, and the girl herself became a little withdrawn. 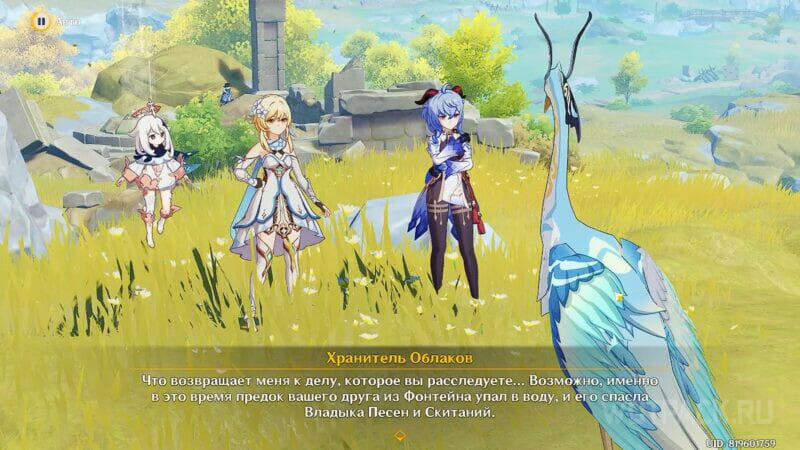 Only after a while did she sing a melody that she liked for the only time. Probably, it was this music that Dvorak’s ancestor heard. The heroes decide to visit Madame Ping again and talk to her.

Travel to the teleporter outside of Li Yue Town across from Tianheng Mountain and hover left to the entrance to the terrace. 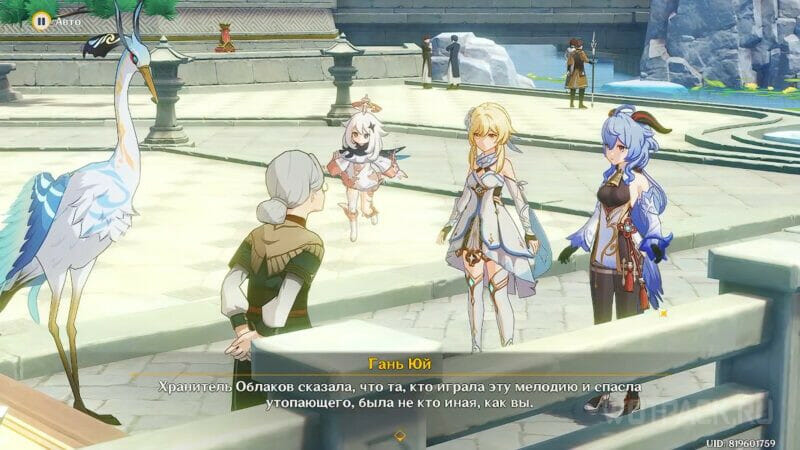 Madame Ping does not deny that she was the one who then saved the drowning man. However, to requests to perform this melody again at a concert, he refuses. Although the grief subsided over time, letting go of the bitter past proved more difficult.

Yan Fei also joins the conversation and wishes everyone a happy holiday, after which he and Gan Yu leave. The Cloud Keeper stays with Madame Ping for a cup of tea, while the Traveler has a few more things to do.

Find Dvořák and Ke Ching in the city and tell the man what you’ve found out. Go to the teleport below, go down to the coastal part.

Dvorak took what he heard rather calmly, but he is glad that the main goal of his trip has been fulfilled. Now you need to throw all your strength into preparing for the concert.

After the conversation, the heroes are overtaken by the feeling that they have missed something important in this turmoil. A few days ago, they promised Zhong Li to find and collect young bamboo shoots, but they happily forgot about it. Therefore, they decide to urgently go to the funeral home, believing that he is now there.

The ritual office is located in the upper part of Li Yue, so the easiest way to get there is from teleports. 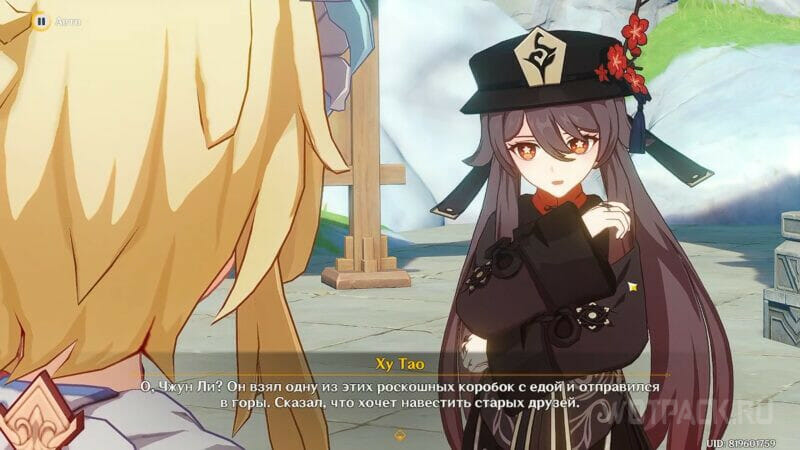 At the scene, Traveler and Paimon find Hu Tao, Xin Yan, and Yun Jin rehearsing their performance. The girls are also getting ready for the concert in honor of the festival. Zhong Li does not appear in place, but Hu Tao says that he went to the mountains to visit friends.

Teleport to the top of Mount Hulao, turn right and go across the pond to a ledge. There, the heroes discover the Adepts, and soon Zhong Li himself joins them.

The traveler gives away the harvested bamboo shoots, which become an ingredient for a gourmet soup. Zhong Li decides to stay here as he has a meeting scheduled, but in the end he shares boiling pork soup with bamboo.

Return to the city and head to the festival site.

As soon as you get close to the designated place, a long cut-scene will begin, where all the characters of Li Yue will take part. The video will also show a concert where they will perform the melodies of Hu Tao with Xin Yan and Dvorak with his group of musicians. At the end of the video, the quest ends and rewards are given.

After completing the task, you can receive the following rewards:

We hope our article helped you complete the task The Only Harmony for an Irreplaceable Soul so that you can participate in the Sea Lantern Festival. If you have any questions or difficulties, write about it in the comments. Read other walkthroughs of the game in the appropriate section.

Metalworker 1925 went to Turkey. The composition of the team for the training camp has been named

Aroged: GOG gives away Ghost of a Tale adventure about a minstrel mouse for free

These Birkenstocks sold for €210,000 belonged to Steve Jobs and they are… well worn