Cobra Kai: Daniel and Johnny’s Dojo closes. Season 6 will be the last. Here is the first trailer 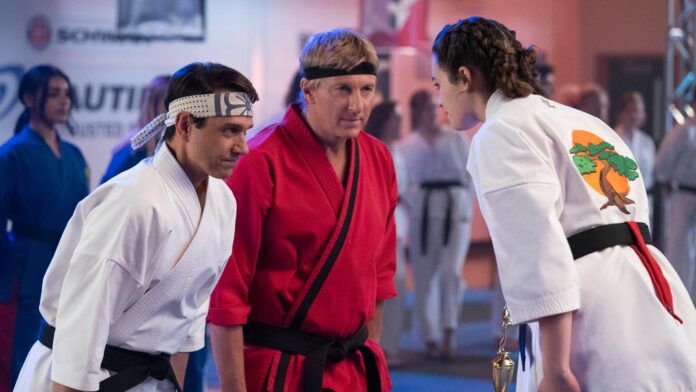 All good things come to an end, and Cobra Kai is one of them. The show born on YouTube Red and then bought by Netflix will close its doors with the sixth season, the last. The streaming platform has clarified things once and for all with the announcement trailer which also anticipates part of the contents but which does not provide a definitive publication date.

It will be the biggest, the “baddest”, and the final one, we read clearly as the images of Johnny Lawrence and Daniel LaRusso scroll by, first rivals, then allies and then, it seems, rivals again. The show’s fifth season premiered on September 9.

Cobra Kai is a series written and produced by Heald, Hurwitz and Schlossberg through their production company, Counterbalance Entertainment. Will Smith, James Lassiter and Caleeb Pinkett are executive producers at Westbrook Entertainment along with Susan Ekins in association with Sony Pictures Television. Macchio and William Zabka are also executive producers.

Beyond Cobra Kai 6, which we suspect will be broadcast between the end of this year and the beginning of next, there is talk of work for a reboot of the film series. Also in 2024, in fact, the cinematic universe that starred Ralph Maccio and Pat Morita (master Miyagi) will blow out 40 candles. The operation should deviate from the previous attempts made with Hilary Swank (always flanked by Morita) for The Next Karate Kid, halfway between sequel and reboot, and Karate Kid The Legend Continues with Jackie Chan and Jaden Smith, where, by the way, Chan he taught Kung-Fu.

Factorio: Significant price increase on Steam due to inflation

Halo Infinite: no DLC for the campaign in development, reveals Jason Schreier. Focus on multiplayer

Revealed new opening and ending theme of My Hero Academia 6

We are waiting for the debut of another Ukrainian in the top league. Tsygankov - in the application of Girona

The Taiwanese committee has given an age rating to Silent Hill: The Short Message for PlayStation 5