Microsoft Audio Dock test: our opinion on this ideal speaker for teleworking

Microsoft has presented an interesting new accessory for teleworkers. The Microsoft Audio Dock intends to combine the practicality of a USB C dock with a speaker equipped with microphones suitable for audio calls and music listening. 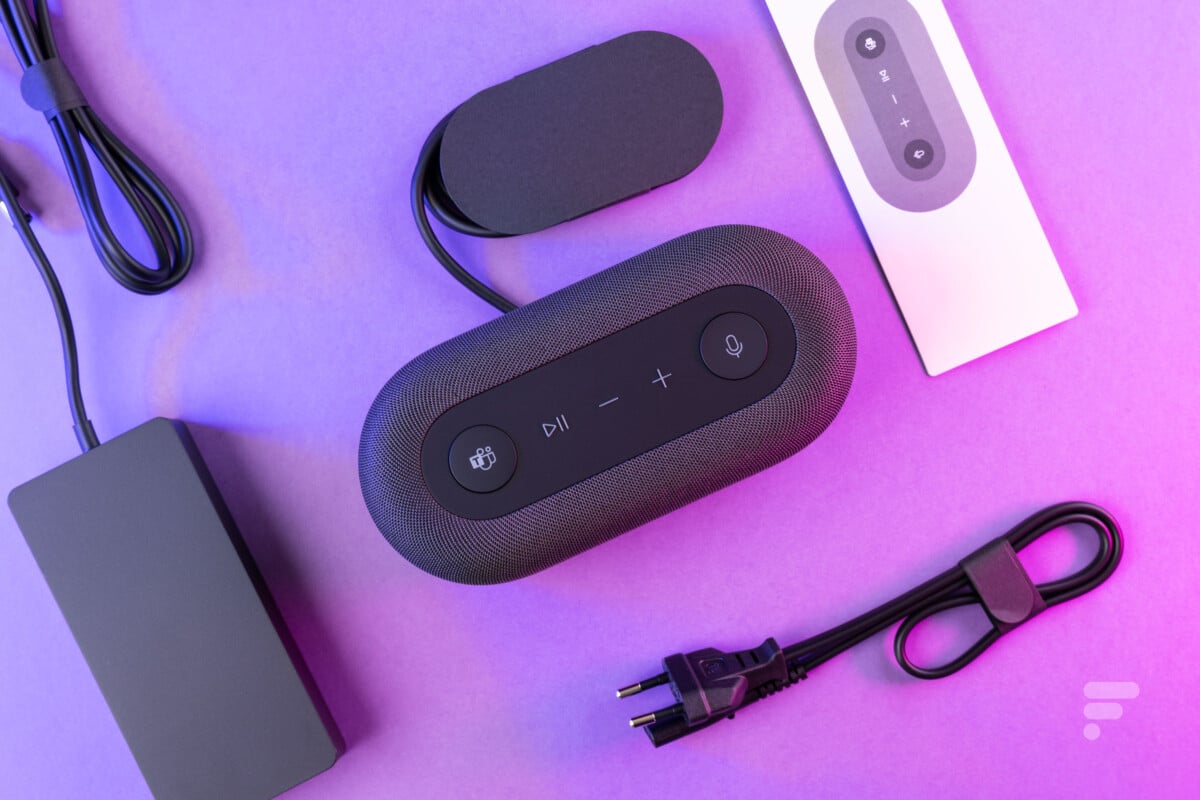 The Microsoft Audio Dock is an accessory for teleworkers integrating connectivity adapted to digital uses as well as a speaker with several microphones. The idea is simple: to make life easier for users by providing an ideal tool for teleconferencing while facilitating the connection of the computer to the various peripherals.

This device is offered at the recommended price of 290 euros and can work in concert with Microsoft Teams thanks to a dedicated button. It also has a variety of connectors, to connect screens and peripherals, like any self-respecting docking station.

The Microsoft Audio Dock does not particularly stand out in terms of its design, which seems to be inspired by what Apple can offer on its HomePods. Interestingly enough, the device actually looks more like a speaker than a dock, which makes you “forget” its primary function, once installed on the desk.

The construction is neat with a plastic assembly and a mesh fabric covering, similar to that of the HomePods. A very discreet logo takes place at the base of the facade and thus reminds us that we are facing a Microsoft product. This Audio Dock is adorned with a little originality at its base with the presence of a flexible plastic gutter, which aims to store the USB C cable attached to the device. 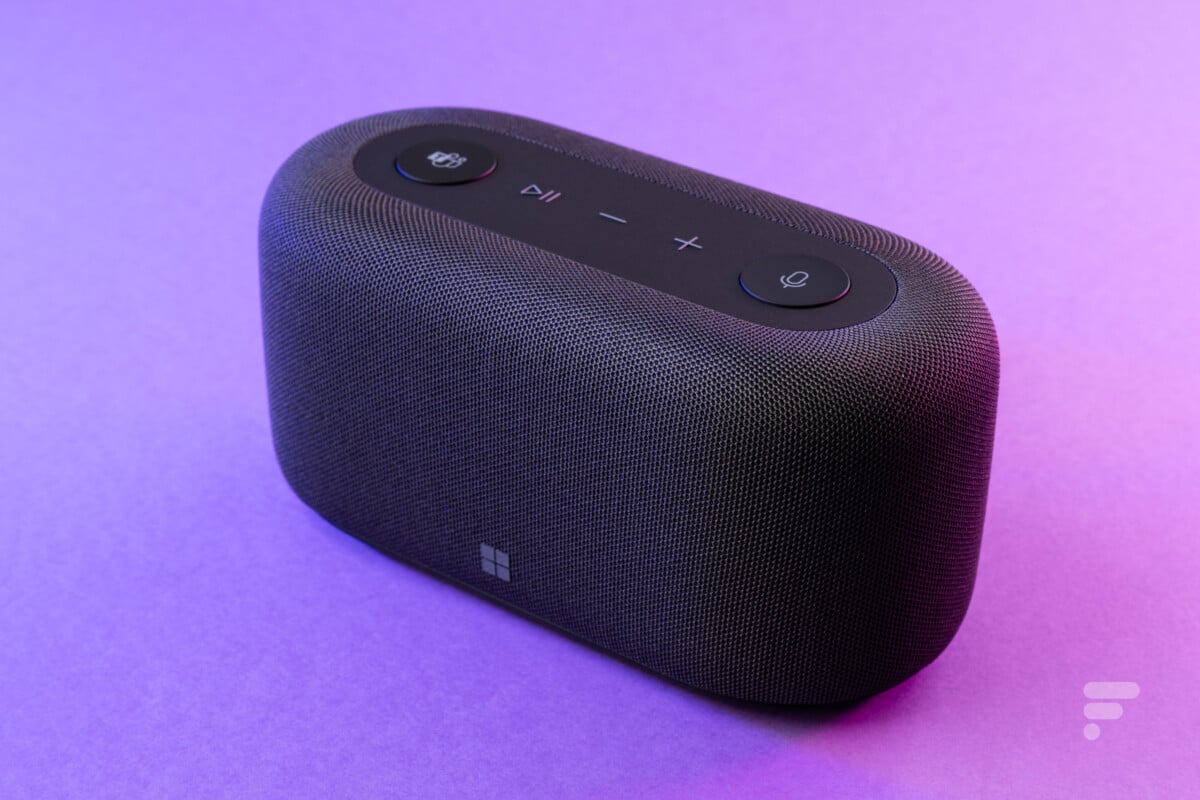 Despite what the documentation supplied with the product states, this gutter can also be used to pass any cables from our peripherals through it, and thus store them more cleanly. This very discreet addition is particularly welcome and brings a little practicality to the Audio Dock.

Like any good self-respecting speaker, the dock has a few buttons, installed on its upper part. The destination of the product is beyond doubt with this imposing button adorned with the Microsoft Teams icon. A second button, twin to the latter, is dedicated to muting the integrated microphones.

Finally, we take advantage of three additional buttons dedicated to volume and playback control. Calling to be installed on the desk and close to the user, these different buttons take on their full meaning. They are wide enough to be operated without hesitation, even without glancing at the docking station. 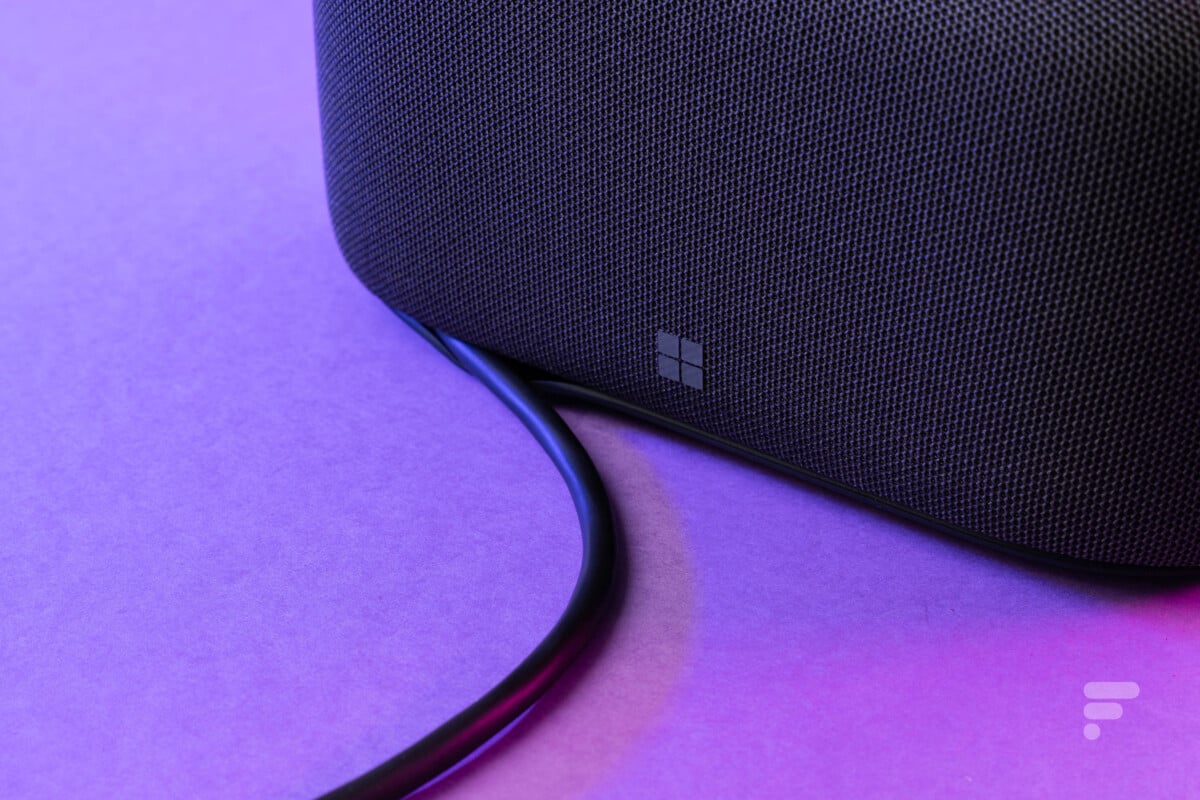 We regret that all the connections have been relegated to the back of the device. Indeed, even if this contributes to the visual appeal of the speaker, we would like to take advantage of at least one or two USB ports on the front to connect a mouse dongle, an SD card or to charge a telephone.

The Microsoft Audio Dock nevertheless remains a well-built device, with a rather neat design and overall compactness. It will easily find its place on most desks while facilitating the use of a laptop installed intermittently.

Microsoft has been a little too reasonable when it comes to the on-board connectors on its Audio Dock. First of all, there is an HDMI 2.0 output capable of offering a 4K 60 Hz image supported by a USB-C 3.1 Gen 2 port providing the same display via DSC.

A second USB-C port is also included for data transfer. The integrated USB-C cable is also Power Delivery compatible up to 60 W to ensure charging of the computer to which the dock is connected. However, during our tests, our laptop always indicated that the charger was slow, despite the usual use of a 65 W brick. 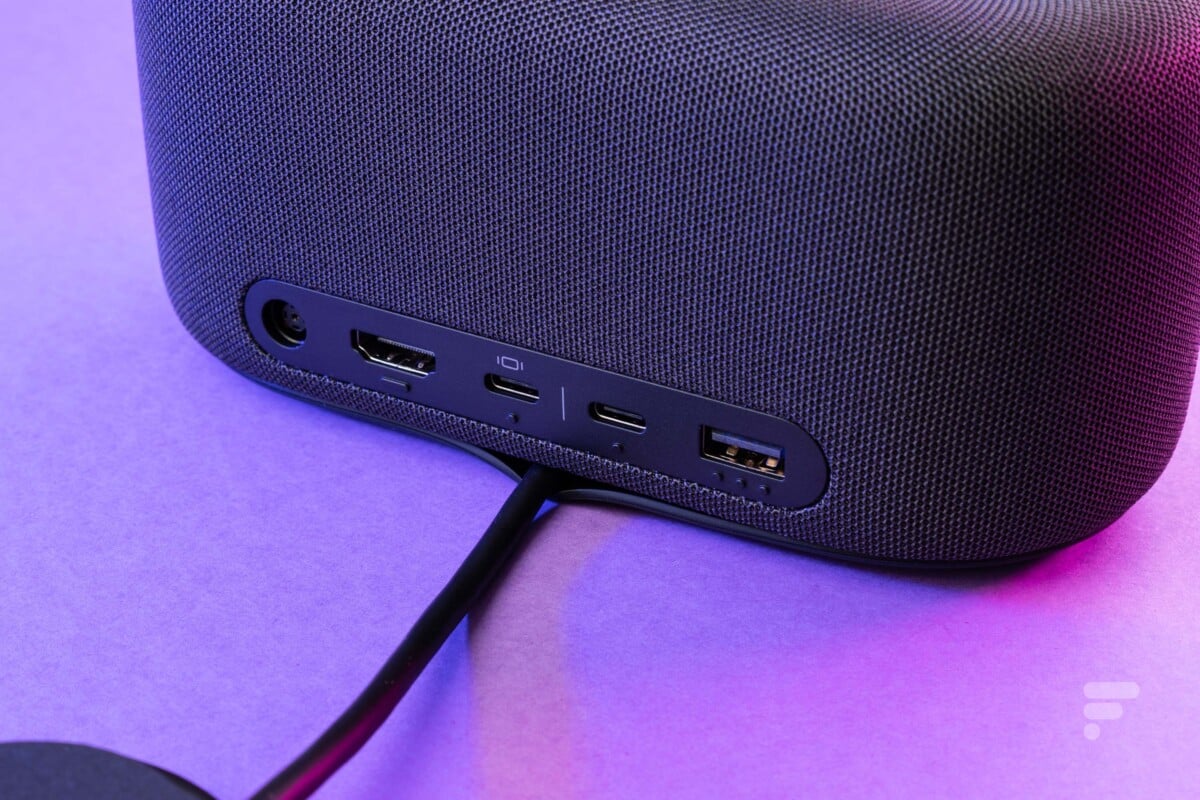 Finally, apart from the power connector for which the power supply is provided, there is only one additional USB-A port. RJ45 socket point for the network or Display Port for more “modern” screens. Even if it makes sense, the dock does not have an audio input or output either.

In short, Microsoft went to the essentials and did not seek to provide very abundant connectivity. It’s rather a shame for a product with a recommended price of almost 300 euros. Apart from network connectivity, we would have appreciated Thunderbolt compatibility, for example.

Unsurprisingly, the control buttons on the top of the speaker integrate natively with Windows. No need to dwell on the multimedia controls that work perfectly and thus allow us to manage the playback of our multimedia content at your fingertips.

The play/pause button can also be used on Microsoft Teams to answer or end a call. It is logically associated with the dedicated Teams button which offers relatively limited actions. By default, the latter has the sole purpose of opening the Microsoft Teams window and… that’s it. It also allows you to “raise your hand” during a call on this same platform. 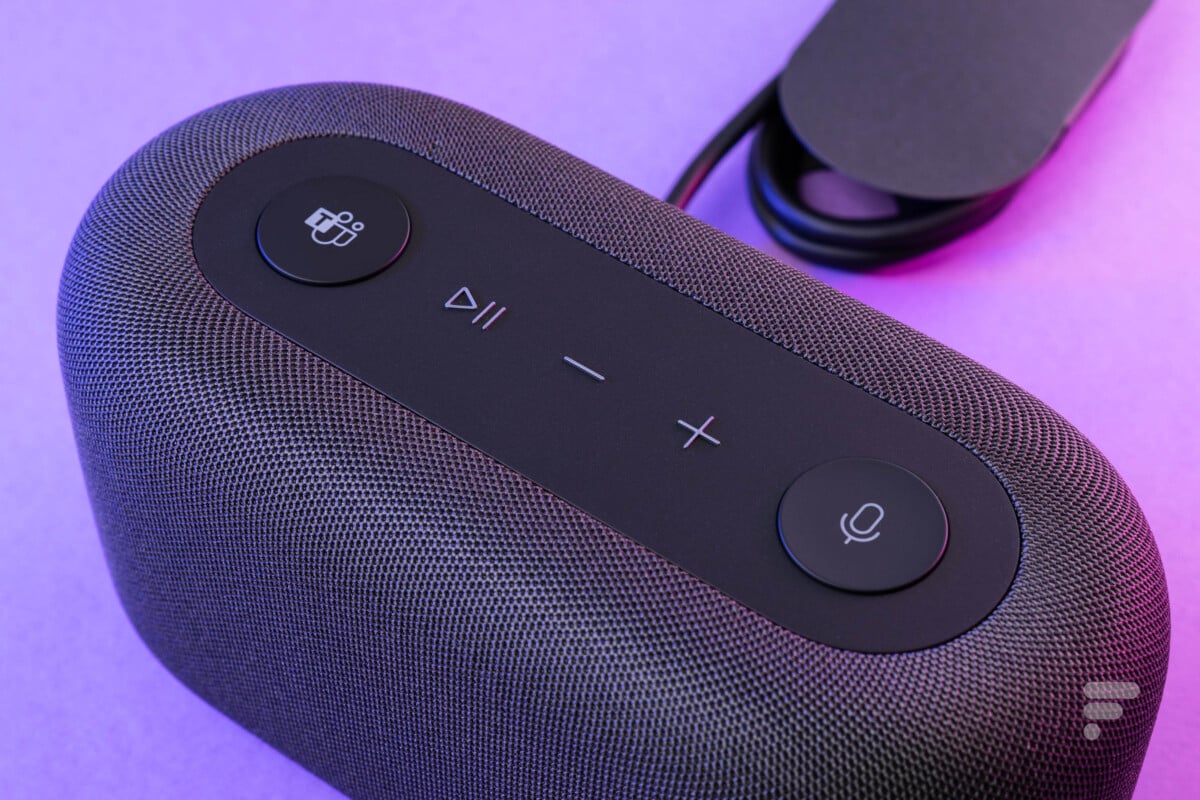 Similarly, the “mute” button works as expected by simply cutting off the pickup from the built-in microphones. Small subtlety: if the user’s microphone is muted during a call, a long press on this button activates it for a few seconds in order to speak. More restrictive than anything else, we didn’t really use this feature…

In use, the speaker worked correctly during our two weeks of testing, which included several meetings and calls each day. The good consideration of the latter has nevertheless been capricious several times, in particular because when a screen is connected to the HDMI port, it can also serve as an audio output. We sometimes had to unplug and plug the dock back in to get everything back to normal.

The sound performance delivered by the Microsoft Audio Dock is very correct given its compact format. The sound reproduction is more than sufficient for professional use in teleconferencing. Even better, the device will do the job perfectly as an extra speaker for listening to music or watching videos. 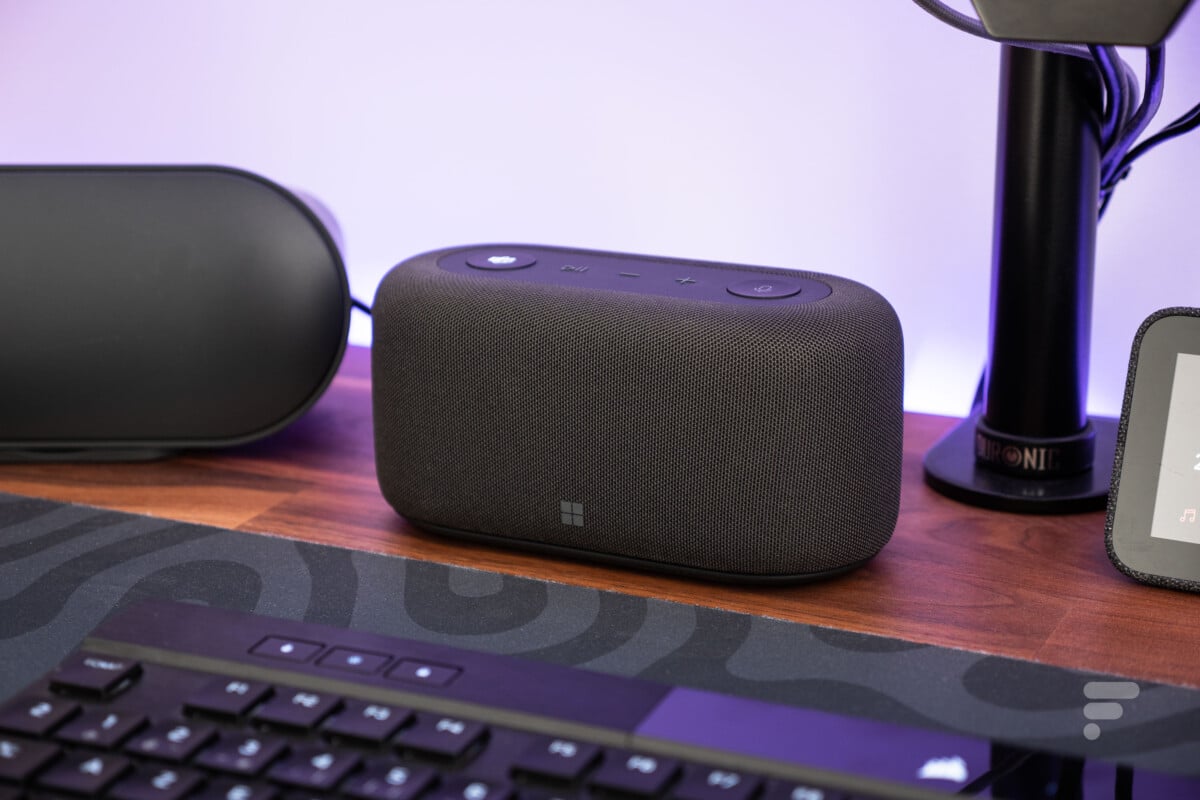 For comparison, the built-in speakers deliver much better sound than a Nest Mini can offer. The bass is much more present and the general rendering is livelier and more consistent. We also imagine perfectly using the device to add sound to a small room such as an office.

The built-in microphone array provides good voice reproduction, but does not sufficiently illuminate the distance effect with the sound source. However, the speaker remains perfectly audible and understandable and none of our interlocutors complained during these few days of testing.

The only criticism that can be made of the device is that it must imperatively reduce the output volume when the user speaks through the microphone. Unlike a headset, you no longer hear other users when the microphone picks up a sound. It’s a small subtlety that requires time to adapt for users accustomed to using a headset.

The Microsoft Audio Dock docking station is available at the recommended price of 290 euros.

Aroged: In the US, they believe that Wagner PMC buys ammunition from the DPRK