“Boring and secondary”: the first ratings of the role-playing game Forspoken appeared

Tomorrow the role-playing action Forspoken should be released, but today the first ratings of the game began to appear, which turned out to be significantly lower than expected. Currently, her average rating on Metacritic is only 68 points out of 100 possible. 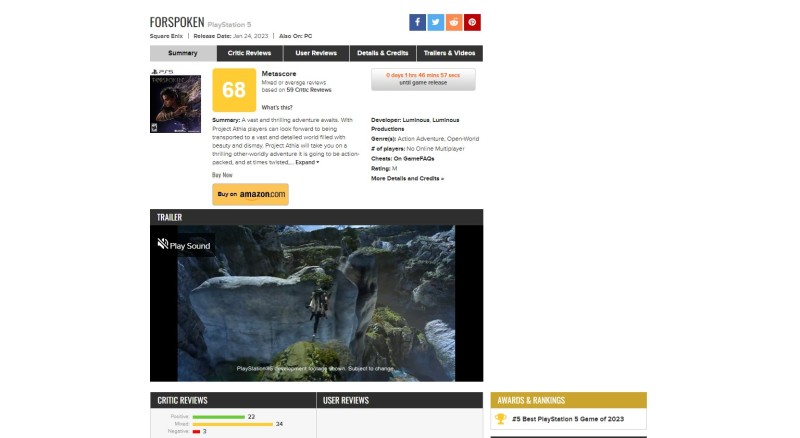 According to the reviewers, the project can offer a rather beautiful picture, as well as a number of interesting mechanics and ideas, but in general it is not able to hook the player for a long time, so it quickly gets bored. The fact is that the game has a banal plot and a huge empty world. Many also disliked the Prologue, which they considered the worst part of the story. The game itself begins to more or less accelerate only closer to its finale.

The combat system, widely advertised by the developers, receives diametrically opposite assessments. Some found it quite entertaining due to its variety of spells and use of parkour, while others disliked it due to its overall lack of RPG elements. Boring additional quests were also attributed to the disadvantages.

In addition, a walkthrough of the first 15 minutes of Forspoken has appeared on the IGN video channel. Note that the plot begins in New York, where the heroine is deprived of all her magical powers. Perhaps this is the reason why Prolog was disliked by many reviewers.

Pierce MORGAN - about Zinchenko: "He is the one we have been missing for so many years"

Forspoken is 'unrecognizable' from initial plans, according to an insider

Hyenas testers talk about their experience

Diablo Immortal has made over $300 million since its release

God of War Ragnarök: Be careful on social media, spoilers are making the rounds