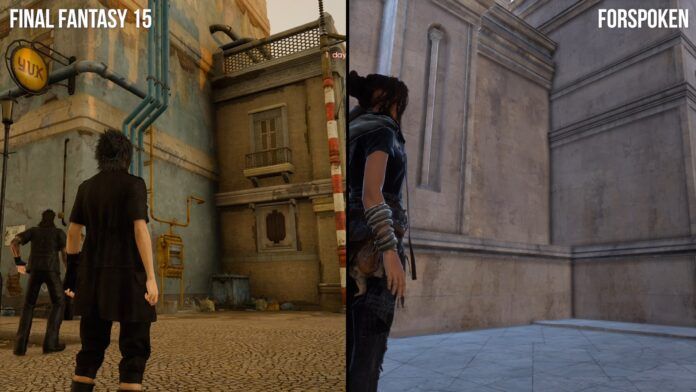 Forspoken is nearing release and, in addition to having a rather mediocre Metacritic, it also disappointed technically. John Linneman, of Digital Foundry, has analyzed in depth the latest effort of Square Enix, praising it on some aspects but criticizing it heavily on others, including framerate and resolution. On lighting, he adds, it seems to be a step down from Final Fantasy 15.

Heavy words, from Digital Foundry, which we will save for later. Forspoken is not all to be thrown away, on the contrary. As the analysis highlights, Forspoken boasts instant uploads. There is talk of loading in the order of the second, half a second more, half a second less.

The same can be said from a graphic point of view. Square Enix has demonstrated how the Luminous can handle very detailed models. What is particularly striking is the protagonist of the game. The same goes for the incredibly smooth animations. The particles and excellent sense of scale help make the fights exhilarating, especially the boss fights.

Very good also from the point of view of the vegetation, with the latter interacting correctly with the passage of Frey. And speaking of Frey, the Digital Foundry reporter was struck by the rendering of the girl’s hair and cape. Both interact in real time with the weather conditions. Unfortunately it is an aspect that only applies to the main characters.

The game also offers great accessibility, an aspect that should not be underestimated in a market where, fortunately, the teams are working hard in this direction. In the end, Linneman praised the presence of six graphics modes: Quality, Ray Tracing and Performance. These 3 double with the modes designed for 120Hz screens. Unfortunately, the positives end there, and we don’t know if they actually manage to compensate for the negatives.

Linneman first demolished Forspoken’s entire lighting system, calling it a step backwards from that of Final Fantasy 15. While Forspoken uses ray tracing for shadows, it is only applied within a certain distance, making the transition visible with pre-computed shadow maps. Ray Tracing does not even interact with all game elements but only with some, excluding for example the grass which consequently has no shadow.

Square Enix would also seem to have almost forgotten about Ambient Occlusion. Almost all, if not all, game environments are free from any form of Ambient Occlusion. The result is a flat and unrealistic game environmentwith lighting that does not coincide with what we should expect and with an image that appears little worthy of the potential of these consoles, PlayStation 5 in the case.

It is precisely on this aspect that, says Linneman, Final Fantasy 15 could do better. And the same goes for other early-generation PlayStation 4 Open World titles like Assassin’s Creed Unity. The perennial bloom effect of the light areas, on the other hand, recalls the titles of the PlayStation 3 and Xbox 360 era. And it is not only this that brings us back to that generation, as we will see two paragraphs later.

Finally, there is the performance to talk about. On this aspect, Linneman’s opinion is rather tepid. For the reporter, the best mode is the Ray Tracing Mode, capable of maintaining a more or less constant framerate. Performance mode targets 60fps and maintains it for most scenes, save for one particular area where it dips down to 45fps. The Quality mode, on the other hand, comes close to 20fps.

To preserve the – however disappointing – performance of Forspoken, Square Enix used AMD FSR 2.1 also on PlayStation 5. Unfortunately, to keep the framerate constant, AMD FSR 2.1 cuts the game’s internal resolution in half, resulting in a Performance mode that bumps up to 720p resolution. A bad result, for a game that was developed with a next-gen conception. In conclusion, Linneman said he was very surprised and negative by this technical achievement.

The creators of the Belarusian laptop have released a transparent TV

No chance for Disney Plus? Netflix bosses are sure of victory

BELENIUK: “Mr. Gutzeit, there is no need to be afraid – there is nothing wrong with the debate”