Forspoken in the test: magical open-world action or pre-programmed failure?

“Forspoken” has come a long way. The open-world action game should have been released in spring 2022. But publisher Square Enix and developer Luminous Productions had to postpone the project twice. The most recently released demo met with mixed feedback, and in the run-up to release, reports circulated that only some of the international media representatives had early access.

All of this fueled doubts in the ambitious Forspoken, due out on January 24, 2023 for PlayStation 5 and PC. In the test, it turns out that the open-world adventure has many nice sides to offer, but is unfortunately not quite up to par in terms of gameplay and world design. You can find out how “bewitched” “Forspoken” really is in the extensive test. 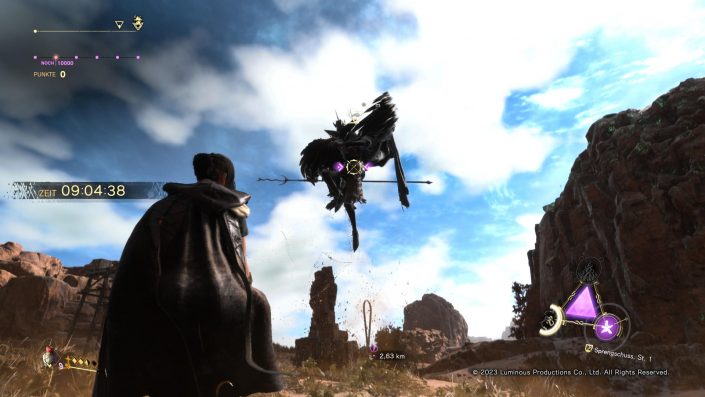 First crash, then struggle against fracture

“Forspoken” tells his story in extremely attractive cutscenes: Frey Holland struggles through life in New York, increasingly threatening to stray off the right track. Her past reads sadly: she does not know her biological parents. She grew up with constantly changing foster parents. She has had frequent troubles with the law and is also at odds with a local youth gang.

Just as the situation threatens to escalate, fate strikes: Frey finds a magic bracelet that takes her to the fantasy world of Athia. The jewel can even speak and serves as a companion and advisor for the next 30 to 40 hours.

He bestows magical powers on Frey himself, and so she becomes the only hope of survival for the residents of Athia. The so-called rupture has broken over the empire: Man and nature then mutated and threaten to destroy the few cities. Responsible for this are the once good witches – the so-called tantas.

The story is lush thanks to main and side quests. However, neither the characters nor their problems catch fire: Frey Holland herself is positioned as an impetuous rebel with a loose mouth, while Reif is a cynical sidekick. However, the chemistry between them isn’t right and especially in the first ten hours the cynical undertone is downright annoying.

Other secondary characters, on the other hand, remain pale and one-dimensional. However, the game certainly didn’t leave us completely cold, since it always comes up with twists and turns that really go to our hearts. However, these moments are not as common as in comparable titles. 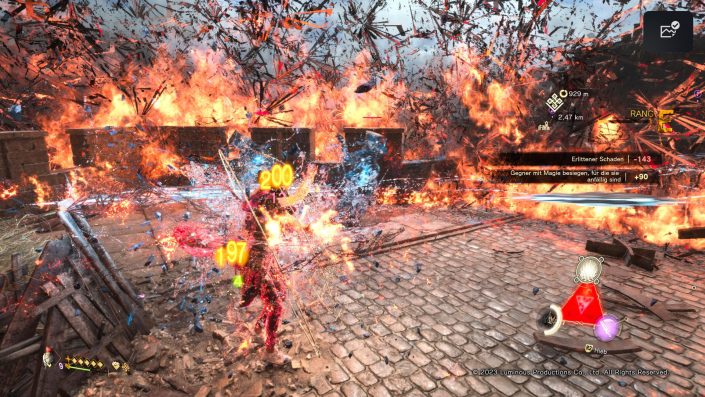 Magic, parkour and other obstacles

“Forspoken” is – similar to “Assassin’s Creed: Valhalla” or “Marvel’s Spider-Man” – an open-world action game. However, the game gets its unique selling point from the so-called magic parkour: while holding the circle button, Frey turns, jumps and flies over hill and dale at breakneck speed – at least in theory.

In practice, the controls are not direct enough and react with a delay when the action button is released. This often leads to Frey accidentally running into or jumping over other objects when she should have stopped long ago. It takes a long time to get used to this shortcoming and to adapt your own way of playing to it.

Even navigating around the world is far from being as convenient as that of the competition. Especially in the rugged mountain regions of Athia, Frey likes to get stuck and then has to be laboriously brought back into position. Only by unlocking the swing function is overcoming height differences halfway feasible. 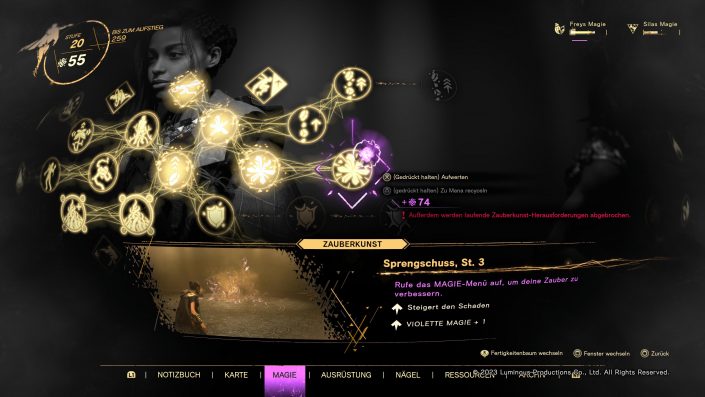 Unfortunately, these difficulties also affect the fights: “Forspoken” relies on four different magic skills, each with their own upgrade trees and offensive and defensive talents.

In the first few hours, you still use violet (earth) magic and fire explosive shots at boulders or plant booby traps in the ground. It is primarily designed for long-range combat. Different colored magic unlocked later offers new approaches: If you activate Frey’s red magic powers, she swings a flaming sword in close combat. Blue is comparable to a bow and is intended more for distance.

Actions can also be charged and if you have done enough damage, you can perform a super action. So the game gives you an incredible variety of ways to master the Fractured Beasts.

And that brings us to the next problem: “Forspoken” is overloaded. The game motivates you to switch between the magic systems. After all, your opponents have resistances and vulnerabilities that need to be exploited accordingly. As a result, you are constantly busy scanning enemies and the associated slowing down or pausing of the game, as well as the cumbersome weapon change.

Later on, you’ll dig through several radial menus and rummage around for the right skills for the moment. This always disturbs the flow of the game and is also moderately comfortable.

Our tip: Be sure to activate the “Automatic spell changes” in the settings and set the slowdown for spell changes to “Stop completely”. This makes “Forspoken” much more controllable. In addition, an imprecise “Lock On” function and the sheer abundance of enemies and effects make it difficult to keep track. Dodging is also sometimes fiddly thanks to the notoriously overwhelmed camera (despite aiming assistance). Ultimately, how controllable a fight is depends heavily on your approach and the enemies in front of you.

The fun factor is correspondingly different. When you take down a herd of mutant deer with a pleasing mix of actions, Forspoken is immensely satisfying. However, if you fall behind and can no longer keep up with the skills, the game can also become extremely frustrating. 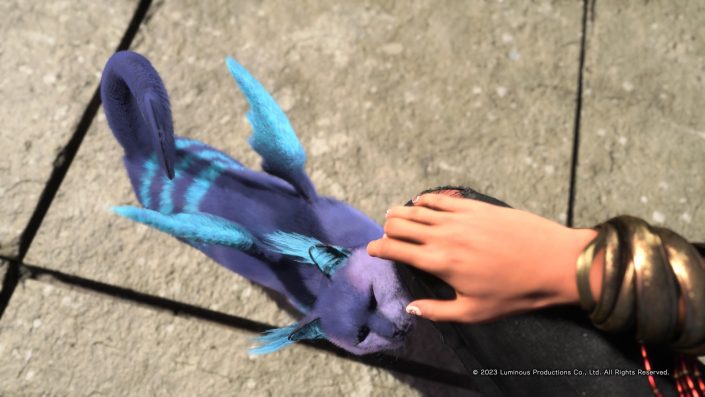 Too much open world standard

As in every open-world game, talent points and upgrades underpin character development: You unlock new abilities with magic points, which you either find in the game world or activate through leveling up. In addition, you upgrade the individual abilities of your arsenal with the help of small challenges that you discover in books hidden in sanctuaries.

The tasks here range from defeating certain types of opponents to using given talents. In addition, you upgrade your cloak and chain with the help of previously discovered resources and you can also customize passive talents with the help of different colored nail polish designs.

What “Forspoken” really lacks – especially in comparison to open-world giants like “The Witcher 3: Wild Hunt” – are balanced side tasks and an interesting game world along with quests. Unfortunately, Luminous Productions only downplays the standard keyboard here. Because it doesn’t matter whether it’s ruins, caves or monuments – in the end it’s (almost) always about flattening hordes of opponents and then reaping a bonus.

Smaller puzzle passages as well as exploring remote areas to search for bonuses bring a little variety to the action. Discovering magical kittens brings the “Awww” factor. The most exciting idea is undoubtedly the emerging fracture storms, in which you have to find and defeat particularly nasty mutations. In abandoned villages and settlements you will also discover documents and clues about the decline of Athia and the history of the tantas.

So the connection between story and game world works properly, but Athias itself could have used more interesting NPCs and more life away from the breach. In terms of looks, “Forspoken” is sometimes reminiscent of a mixture of “Elden Ring” and “Death Stranding”, but without achieving their uniqueness and atmosphere. The game still looks great and offers some solid opponents, especially with the tantas, who make life difficult for Frey.

Valencia and Almeria staged a cut, scoring two goals each other

6 Tips for a Faster Internet