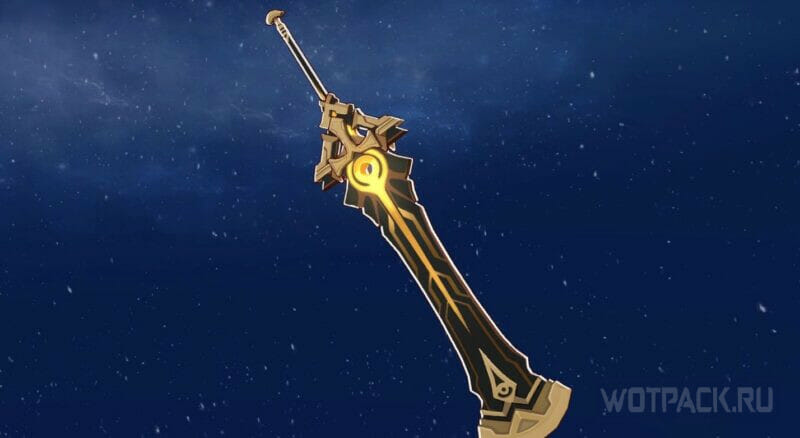 The Reed Beacon in Genshin Impact is a two-handed legendary sword that increases attack power and has a critical chance in its main stat. In addition, under certain conditions, it also increases the wearer’s HP (health). The reed beacon is Daehya’s signature, but there are many other characters in the game who can use it effectively.

In the guide, we will tell you in detail who the Reed Beacon is suitable for, how to get it, upgrade it and use it in battle.

How to get the Cane Beacon in Genshin Impact

The Reed Beacon can be knocked out in the Limited Prayer “Incarnation of the Deity”. The weapon banner will become available March 1, 2023 in update 3.5 (if nothing changes before the release of the patch).

For future Claymore reruns, keep an eye on the constantly updated banner schedule.

Characteristics of the Reed Beacon 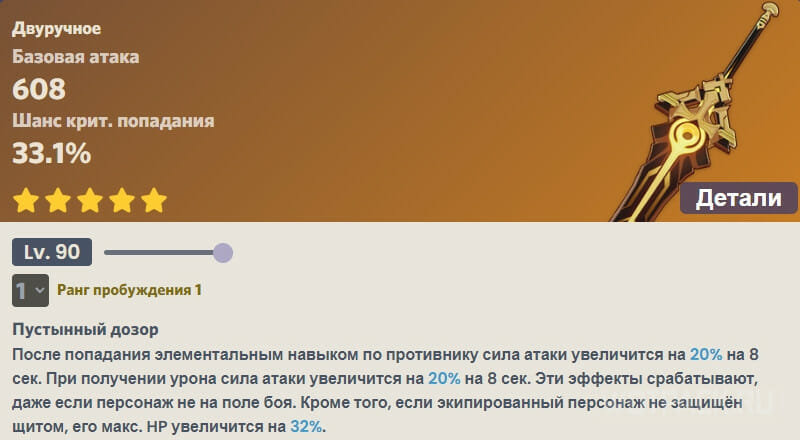 How to Raise and Awaken the Reed Beacon

To raise and pump the Reed Beacon, you need to prepare the following resources in advance:

You can simplify the calculation of already received or missing resources using the official calculator.

For awakening weapons, you need to knock out its duplicates from the banner, and then combine them with the main one in the “Awaken” tab. This feature enhances the passive effect of the claymore by increasing its stats.

The exact values ​​that the sword gets after awakening in each level are presented in the screenshot.

Who is the Cane Beacon in Genshin Impact for?

The reed beacon can be placed on almost any main ddwho wields a two-handed sword. Due to the high base, increased crit chance and attack power, it perfectly complements the damage dealer and strengthens it. Despite the rather simple requirements for activating passive bonuses, only those who have an elemental skill that either deals damage outside the battlefield or has a cooldown of 8 seconds or less will realize the maximum claymore. Otherwise, characters will most often activate only 1 buff, provided that they are not under a shield or other invulnerability.

The following characters are best suited for the Caneland Beacon:

Dahya. An ideal candidate, since the weapon is her signature and fully matches the gameplay. The elemental skill attacks opponents, dealing periodic damage, and Daehye does not need to be present on the battlefield for this. She also has a mechanic where she takes damage while out of the battlefield. It is important to consider that this effect only works in the absence of a shield. The heroine herself is primary/secondary dd, so the crit chance and increased attack power are no less significant bonuses. The weapon will show itself especially well if available 1st constellation, since in this case Dehya deals additional damage from maximum HP. Eola. The cooldown of the elemental skill’s quick press is 4 seconds, so she can activate the bonus. She does not have her own shield, and given that the heroine usually does not switch after activating the explosion of the elements, the likelihood of receiving damage also increases. This will allow you to deal increased damage not only with normal attacks, but also set new records with your ultimate thanks to a cumulative increase in attack power in the form of 40% (on R1). In combination with the Pale Fire set, a rather powerful combination will come out. Dilyuk. Able to activate elem. skill 3 times in a row, and the total cooldown of the skill is only 10 seconds. Like Eola, he doesn’t have his own shield, so it’s fairly easy to take damage, and the gameplay goes well with his second constellation. Although Diluc’s ascended crit chance increases, which can lead to an overabundance of this stat, it is still a great sword for him. In addition, under certain conditions, such an amount of C/N will allow you to focus completely on critical damage in artifacts. Razor. It has a fast elemental skill cooldown (6 sec – quick press, 10 sec – long press), while in the ult it cannot leave the battlefield, which makes it vulnerable to enemy attacks. In the case of this sword, this is rather a plus. In addition, the presence of crit will be extremely useful for the hero. chance for stat balance. Bay Dou. In the position of the main damage dealer, she is able to effectively implement this weapon due to the fast cd of the elemental skill (7.5 seconds). The only point is that with the 1st constellation open, she activates the shield after applying the ultimate, which can prevent her from getting the maximum bonus to attack power. However, even in this case, the weapon is quite suitable for her, since the shield is fragile and, most likely, will break quite quickly.

For the characters discussed below, this weapon is not the best option, but can still be used as an alternative:

Arataki Itto. The cooldown of the E-shki is quite fast (10 seconds), so the 1st bonus can be maintained more or less stably. However, the weapon buff goes to attack power, so for this hero, since he plays defensively, the buff won’t do much good. In addition, it is worth considering that he is a Geo character and, due to his element, is able to constantly create shields, which is an additional disadvantage. This disadvantage is less critical in a mono Geo team, where there are no other elements to call Crystallization. But this is not always a guarantee of the absence of shields, since the reaction can also arise from weather conditions, and from elemental skills and statuses of opponents. In addition, then you will have to abandon Zhong Li (if he exists), which is also a disadvantage, because the two of them make up a very strong and comfortable duo. Chun Yun. Bonus when activating email. he will not be able to activate the skill stably, since the cooldown of the ability is 15 seconds. However, there should be no problems getting damage for the 2nd bonus (if there are no Geo allies or shields in the squad). As a result, this is a good option for him if the hero takes the position of a damage dealer.

Separately, we single out Noelle and Xin Yang. In the case of these characters, the claymore becomes just a “stick” with crit. chance since their elemental skill has a cooldown too long and doesn’t deal damage over time. In addition, they apply a shield, which is why they do not even realize the second part of the passive effect. From weapons to crit. a chance for them to optimally put the “Dragonbone Sword”.

How the Reed Beacon works

To receive all weapon bonuses, namely 40% to attack power and 32% to HP (on R1), the following conditions must be met:

Thus, the mechanics of the passive ability of the Reed Beacon is sharpened for playing without the use of shields, which will not be to everyone’s liking. Of course, one of the buffs can be neglected, but then the weapon is only half realized. Based on this, Not recommended put Geo characters in a squad with this claymore, since calling the Crystallization reaction also generates shields. But the presence of a healer in the squad becomes almost a prerequisite in order to avoid death when receiving damage.

Here is an example of rotation when using this weapon:

Activate buffs and place healing skills in the arena with the help of supports. Use an elemental skill on the wearer and keep attacking your opponents while taking damage. After 8 seconds, switch to supports again, refresh the bonuses and return to the damage dealer.

Note: Since Daehya takes damage out of the field thanks to Blood of the Scarlet Mane (E-shek), she does not have to stay in the battle to earn all the buffs.

We hope this guide helped you find out who to put the Reed Beacon on in Genshin Impact, how to get it and use it in battle. If you have any questions, ask them in the comments. Check out other Genshin Impact weapon guides on our website.

OFFICIALLY. Dnipro-1 signed a left-back who played at the 2022 World Cup

Dolphin, the GameCube and Wii emulator, is now available as a standalone Xbox app

Xbox Game Pass: Ys VIII: Lacrimosa of Dana may be playable as a subscription