Nikita Sidorenko: “They tried to dissuade me from going to Ukraine, but the brother factor worked”

Newcomer Kherson “Dnepr” 18-year-old Nikita Sidorenko – the top acquisition of the Kherson club during the winter break. The hockey player spoke about how the player of the youth team of Ukraine ventured to return from the Czech “Dynamo-Pardubice” to Ukraine in an exclusive conversation with the site Aroged

– Nikita, how would you comment on your move from Dynamo-Pardubice to Dnipro?

– The main reason for my return to Ukraine is the maximum game practice that the coaching staff promised me here: playing in the first lines, going on the ice in the majority and in the minority. That is, full load. Unfortunately, in the Czech Republic, after the tenth game, the coaches lowered me to the third, and then the fourth link, removed me from the majority draw, which affected the statistics and my desire to change the situation.

– Why do you think they stopped using you in the top threes of Pardubice? Looking for reasons?

– There are high speeds in the Czech championship, but there is also plenty of power struggle. You can only look for pluses and benefits for me in this, but the problem is that I am not enthusiastic about the power style of hockey. Apparently, this was the reason that I was removed from the top three. In Dnipro, it seems to me that the coaches know how best to use me for business. And physical activity in Dnipro is stronger than in Dynamo-Pardubice.

– What habit did you bring with you from the Czech Republic to Ukraine?

– This does not apply to hockey. It’s just that at the table I began to use a knife and a fork more, and not like ours – a spoon (smiles).

– There is war in Ukraine! Didn’t relatives and acquaintances dissuade you from the idea of ​​returning to the Ukrainian championship?

– Of course, most people from the circle of friends did not support my intentions, including my mother and at first even the Dnipro coaching staff. The arguments were strong – this is safety in Europe and performance in one of the strongest youth hockey championships in the Old World! .. I hesitated for a long time, but when I found out that my cousin Sergey Stetsyura was moving to Dnipro, I finally ventured to go to the pike “.

– What tasks do you set for yourself in Dnipro?

– To become the champion of Ukraine is the main goal. And I also want to prove myself from the best side, in order to then move on – to Europe or North America.

– How were you received in Dnepr? With whom did you know well, besides Stetsyura?

– I recently competed with Artem Portnoy at the 2022 Youth World Cup in Poland, I knew Anatoly Revuka well … In principle, I greeted everyone and got to know each other in the locker room, they were warmly welcomed, no problems. 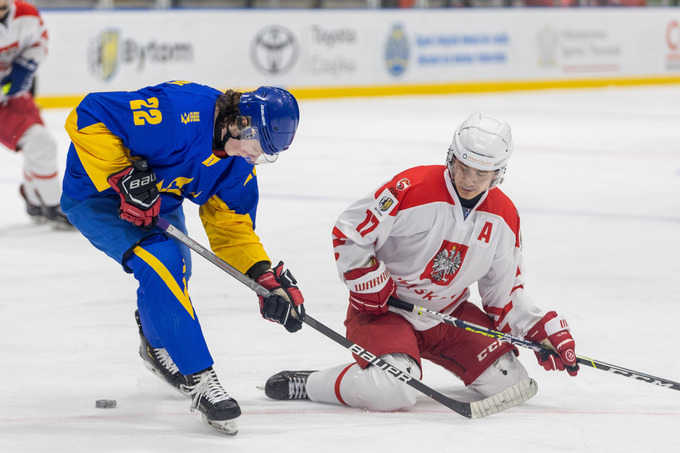 – The other day I watched a video in social networks, how Dnipro players diversified their training with an unusual exercise: they put one skate on the puck and pushed with the other foot …. What a fun exercise?

– Due to the long pause in the championship, we can say that we had the second pre-season of the year. On that day, the coaches decided to improve our skating with the help of a professional figure skater – the girlfriend of our goalkeeper Maxim Sulyutin, who offered us such an exercise on ice. There were many different variations of riding with turns in different directions and forward movement.

– Yes, I sort of coped with the task, but our youngest player, Ilya Shcherbak, looked awkward. Endlessly fell (smiles).

– Who better than others managed to perform the exercises of the figure skater?

– I think, at Dima Kobylnik’s. Champion!

– Nikita, Dnipro has a series of away games ahead in Kyiv. Do you feel some kind of jitters before the debut for “pike”, and even on the central arena of the country – the Sports Palace?

– Indeed, I used to visit the Sports Palace only as a spectator, I didn’t have to play, but the walls of the large hall do not frighten. Partners said that in Kyiv there are large locker rooms and you will have to run more – the site is rather big. However, in the Czech Republic, I already got the practice of playing in large palaces, and the experience of playing at the world championships should help me successfully fit into the game.

– Who do you play with in combinations of Dnipro?

– What can Dnipro count on in the next matches against Kyiv and Sokol on January 27-28?

– Only one day before the game, four main players from the student team of Ukraine will join us, so there may be a certain imbalance in preparation. We do not know in what form the guys will arrive after a long tour of North America. So it will definitely not be easy for us, but the team expects to take maximum points in Kyiv and come out on top already without any reservations.

– Should the fans wait for Nikita Sidorenko’s goals already in the first games for Dnipro?

– But how! That’s why I came here to score, give assists and be useful to the team.

Xbox Game Pass Subscribers Get Hi-Fi RUSH, GoldenEye 007, JoJo's: All Star Battle R And More At The End Of January

Atomic Heart, the official release date will be announced tomorrow with a trailer